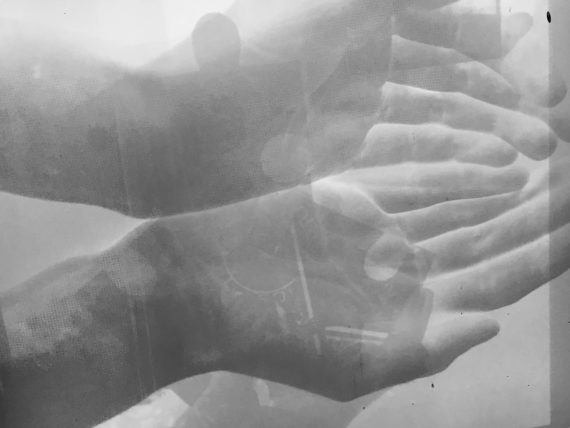 In the Summer of 2018, I work with Olga on a movement piece based on Mr X’s gestures. I feel self-conscious – movement (and being filmed) doesn’t come easily. What I (re)learn is the vulnerability that comes with being observed and scrutinised – a timely reminder of what it often must feel like being a hospital patient, and of the demands we make of participants in art projects on site.

Talking with a colleague in the art studio at the hospital, I realise that the trace of ‘recovery’ (if that’s what it is) can be found in the by-product of activities. On the wards, progress is measured in different ways – a change in blood markers, weight gain or loss, bone composition … In the art studio, I often come across ‘clues’ in the things left behind which seem to suggest a way forward or through, different ways of understanding the body and new subjectivities.

All of my thinking about vulnerability (and its flipside – resilience), came from my experience of working with ‘Mr X’, an artist who makes almost all of his work onsite at the Bethlem Royal Hospital, the oldest still-functioning psychiatric hospital in the world.

Mr X has been making cardboard structures [and vehicles], at first in his room and now, with permission, in an empty interview space within the Bethlem Royal Hospital. The temporary cardboard structure, repeatedly modified, documents the endless process of adjustment that occurs as the individual calculates and recalibrates his relationship to the institution. The structure is simultaneously a form of escape, a hiding place, a filter, a second-skin – an alternative way of inhabiting the institution but also a reflection and a critique of its spaces and rules. The structure has a specific use-value for the person who made it. Survival in any institution requires a series of recalibrations, moments when you conform and others when you resist. Making this structure is a response to the question: How do I make this space adapt to me when I am constantly being asked to adapt to it?

I began to think about his gestures as a kind of tool-kit for survival in challenging environments. I thought if I could inhabit his gestures, I could somehow embody his knowledge of how to thrive despite constraints:

I struggle with the idea of ‘recovery’ – particularly when it’s seen as a linear narrative, moving from a point of un-productivity to productivity.

See Recovery in the Bin for a critique of neo-liberal understandings of the term.

Many times over my years running the art-studio in a psychiatric hospital, I’ve seen people’s trajectories, each as complex as the person living their individual process of ‘recovery’.

I have been looking at a historic film entitled ‘World War 1 Shell Shock Victim Recovery (1910s) from the Pathe Archive (stills above). I feel like a voyeur, spying on this stranger’s vulnerability. When I show my choreologist friend, Olga, she doesn’t feel uncomfortable but sees only the potential in the person’s movements, no matter how broken and halting (this is how they appear to me).

Part of the problem is that I’m used to thinking in still imagery, but isolating moments from the flow of the film is a kind of death – I’m creating a ‘corpse’ image. As Barthes writes, ‘[P]osing, I instantaneously make another body for myself, I transform myself in advance into an image.’

To rid me of this self-consciousness, she gives me a series of ‘prescriptions’ – antidotes to the static self-image that keeps me locked in fear (of pain, embarrassment …).