Another few months have rolled past; our daughter is now three months old and we are starting to get out and about a bit more.  Unlike last time when I was looking after a baby, and my son and I used to go all over researching materials and processes to build House of Cards, this year will be dedicated to something less art related, though creative in a different way: the planning and (we hope) completion of an extension to the house we have bought in Denmark.  In some ways it may inspire my practice. ..next week I intend to visit Denmark ‘s oldest stonemasonry yard, for example. But today’s visit inspired me to resume this blog because it provided the sort of unexpected and  pleasurable encounter with an aspect of Danish culture, that I want the blog to be about.

I had to visit a window showroom on an industrial estate off one of those drab ringroads through the middle of nowhere that the Danes do as well as we do.  Usually one speeds along in a car glad to be going through as quickly as possible. Today, with my pram in tow and going via public transport, I alighted at the appointed stop, consulted the map on my mobile and set off down the hard shoulder  (bike path as this is Denmark) to a footpath that was supposed to be there. An unlikely gap in the fence led to said path which proved to be a path through a so called ‘haveforeningen’ (allotments).  Here, feet from the dual carriageway, was a little oasis.  Little gardens, some with gnomes in attendance, and charmingly post boxes with the owners’ names on by the gates.

Admittedly it looked a bit sad on a chilly March day, but it still cheered me no end to stumble over it, and to think of the ideal that lies behind such a patch of land: every person, no matter how poor, should have access to their own corner of earth to cultivate and relax in.  There’s no doubt that Denmark has its rich and poor; just the previous day we were visiting the high end Garde Hvalsoe kitchen showroom …super stylish and super pricey (at £50,000 a kitchen, way beyond our budget), and I get the impression that, as in Britain, the divide between rich and poor is growing in Denmark, but this little allotment was still encouraging in its respect for the social welfare ideal.  Unlike on British allotments, the Danes often have a little ‘summer house’ for sleeping in on their allotments and one of these; perfectly trim and well maintained with its dark wood and yellow window frames summed it up: Paradise, it said by the door. 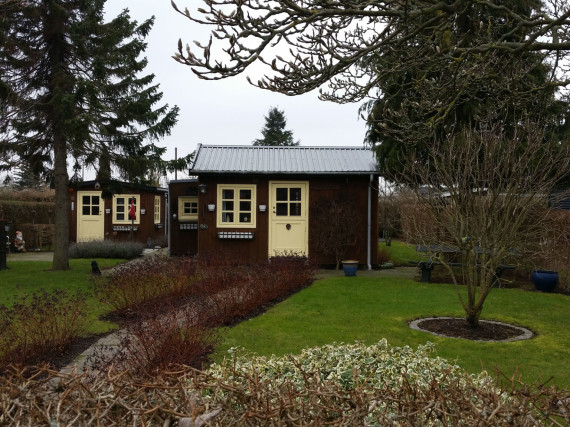