In this blog post, I will be talking about the differences of impact on the audience between a Reel and a Post on Instagram. It caught my attention that reels became really popular following the popularity of  another app Tiktok. The reason for it was the concept of posting short 10-20 second videos in which you either do or don’t catch someone’s attention.

HOW DO REELS WORK
Reels is an option on Instagram on which a creator/app user clicks to add a short video (sometimes including photos as well) with music or without. These work based on the algorithm Instagram creates through your search, follow or like history. Example: You as a user follow the Instagram naccount of Tate modern ( @tate ) > suggested accounts become art based > reels will immediately become art based.

WHY DO I MENTION THE DIFFERENCE BETWEEN A POST AND A REEL
In the past week, I have been scrolling through my reels and came across one specific account @ruben.toe, whose account is based around his private life and abstract art he produces. On his reels, he posts 3-10 second videos with quick cuts and interesting music that doesn’t make the viewer (speaking subjectively) get bored.

Most of his posts on reels go up to thousands of viewes and likes. Ruben’s posts still get thousants of likes, but not as many as the reels.

His account made me do a quick experiment. On my Instagram account @novotnaamelisa, I would usually post the progress of painting on IGTV, where the videos are available to have up to 60 minutes if uploaded from your laptop. There, I did the same as Ruben, but with the lenght of my videos, I could see even my own boredom with skipping through my own work.
That is why I tried following Ruben’s way of posting and posted my first quick reel: 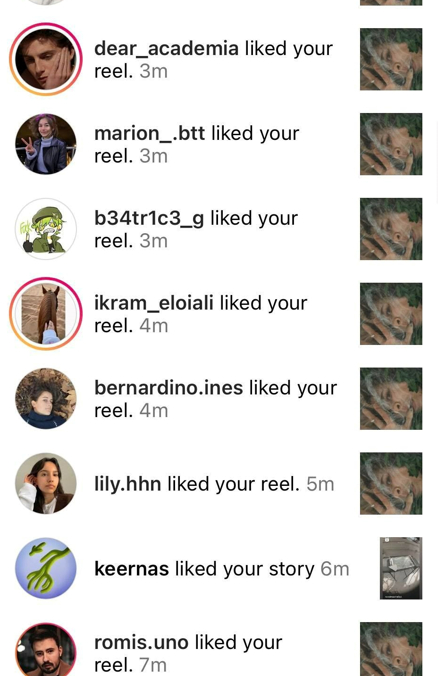 In seconds and minutes, I received many likes and follows. In comparison, this is after posting a normal post: 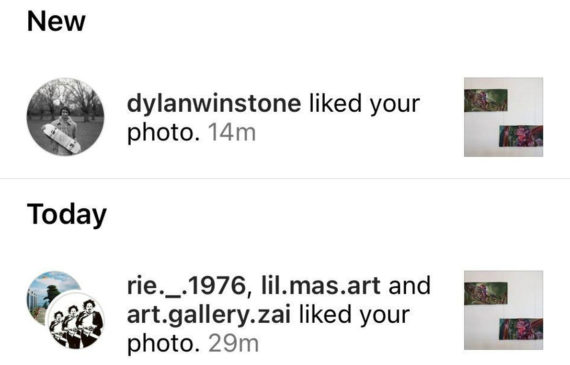 TO CHECK HOW THE POST AND REEL IS DOING NOW:

As being a part of the Online Collaborative Residency based in Colchester and provided by the London Space, this post will be starting my first findings surrounding the topic.

As part of the OCR, every collaboration pair had a period of three days in which they would take over the 37queenst instagram profile to promote their projects, ideas and etc. I will try and compare my (and my collaborator’s) Instagram takeover with the other collaboration pairs, what made an impact, what was successful and what wasn’t.

TIMING
The period of the takeover was in the week days, which I thought of as a disadvantage as those days are usually the busiest leading to people not being able to access their instagram as easily as on the weekend. This lead to us choosing a time in which we thought people would find the time to look at the profile. That time was between the 12-2 pm as that hour is usually the lunch time hour. Here is a graph from Sprout social that made a timetable of times in which people are most active on Instagram: 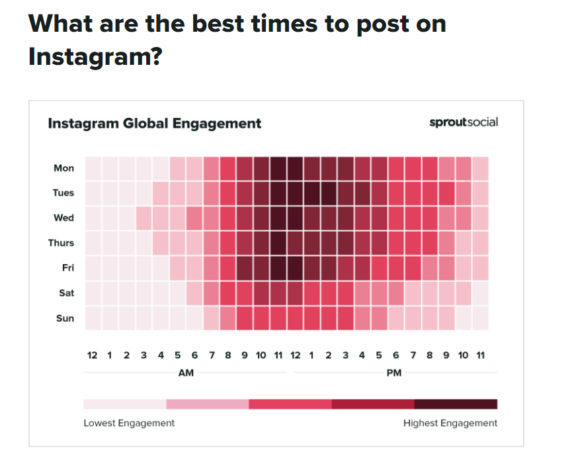 It ended up being sucessfull as many people liked our posts and even interacted with them but in the end, the timing was not as important as other collaborators added their pictures in various times and ended up with the similar amount of likes and interractions.
(mine and my collaborator’s picture is the one on the left)

CONTENT
Over those three days, we added pictures that included our conversations behind the project which could be interesting to the audience, our influences and then our actual work. Here I analysed that adding the text version of information was much more apprecciated in the description rather than the picture itself although we both thought that having the text on the picture would lead the viewer to actually read it as some of us just scroll without reading the descriptions.

To note here, I am just focusing on likes and the viewer’s engagement.

As you can see here, the pictures/videos that included our work had been accepted a liked by the viewers more than the other posts.

With what we posted at that time, our personal accounts, so as the one we had the takeover on, have received quite a few followers. Those followers were not just random people but artists.

were something that dragged people focused on all those to our picture. What we did was using hashtags artists would use to find out more about a theorists etc., but we also used the ones that would bring the general audience to it. Our idea was that the hashtags like queer and feminist are the hashtags in which section our posts could stand out.

SUCCESS + outcome
This experience taught me the importance of engagement that you need to put into instagram to constantly gain wanted audience. Another important thing it taught me was the importance of preparation before posting. The post needs to be thought of and prepared to suit the feed, to suit the theme of the instagram profile and to constantly keep on engaging the viewer to search for more information.