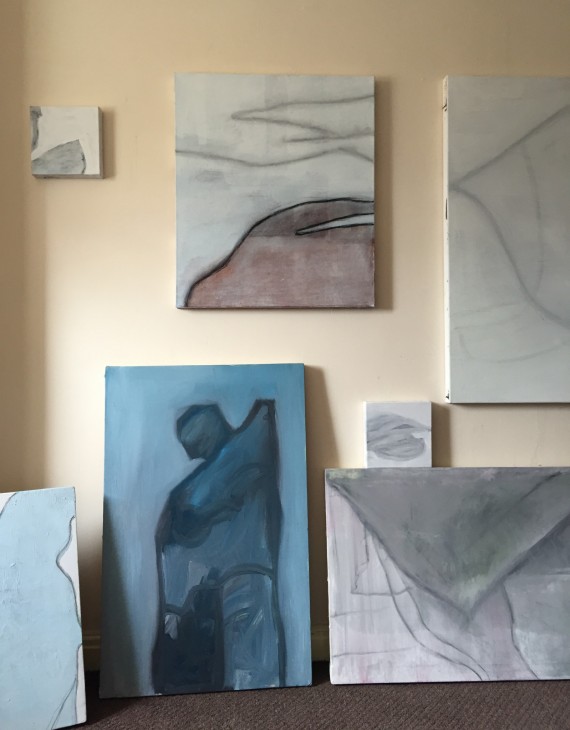 The title refers to a variety of meanings. In one sense it refers to the notion of covering up, hiding or closing something. I also like to think of it in the geographical sense as an element within a landscape. I initially came up with the title with the image of a folded map in mind. Like a folded ordnance survey map that has been rain damaged and become difficult to read, hard to distinguish, the painting looks to simultaneously represent the map, the place itself as well as the experience of being there.

There’s contradictions that exist within this painting, it seems to represent a sense of distance, but with no depth of field, there is a layered build up of paint and tension, but the surface is smooth and flat, it feels easy on the eye but difficult and rough on closer inspection. The dialogue presented by this painting corresponds with the tensions and apparent contradictions that exist within it.

I’m really interested in the idea of ‘found paintings’. Coming across painterly incidents within the non-art arena of functional painting. Within badly painted fences and botched half jobs I see shapes and compositions that are really interesting when viewed in a different context. It’s something about serendipitous mark making and the oxymoronic nature of paint that can provide a playful dialogue around the relationship between function and art. The monumental banal is a mainstay in contemporary art that links back to Duchamp and Dadaism, but I suppose its just about looking at the ordinary and seeing the extraordinary. The difference between looking and seeing. Some of my recent work is definitely influenced by these ‘found paintings’, but more in the quality of mark making than the composition.

Painted over one of the wood stain paintings.

Looking at it in context with the rest of my recent work, there seems to be a dialogue developing between them and a series starting to form.

Part of what I’m enjoying at the moment is the idea of covering up. Further to my reflection in the previous post I have been thinking about this in the application of these recent works and there is a strong correlation. There is almost always a painting once considered finished underneath all of these works. They have been painted over. Sometimes completely, sometimes enough to drastically alter.

Another element of enjoyment at the moment is in the materials I’ve been using. I have been using white emulsion, oil pastels, watercolours with various bits of other things that happen to be lying around such as wood stain or pencil crayons. The white emulsion provides a plastic and sharp effect on canvas, especially when used along more traditional artist materials. It reminds me a little bit of when an image gets too much sharpness or contrast applied on photoshop, but for some reason you kind of like it. The emulsion is pretty much pushed to its limit on these canvasses by working, re-working, rubbing, scraping and laying over pastels and watercolours. The oil pastel initially gets applied before the emulsion has the chance to dry, creating a battle, a conflict which causes challenges when negotiating edges, borders and boundaries. There are definite borders and boundaries in these works, areas of space but a lot of the time there seems to be no depth of field at all. There are contradictions to contend with for me in these works.