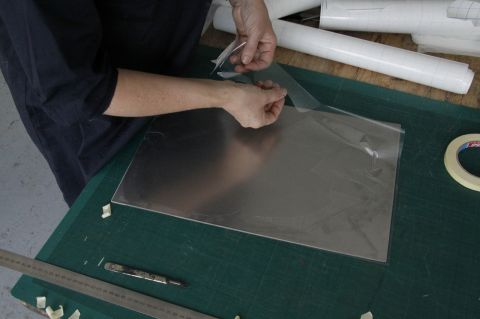 Industrial mass production is all about repetition. As Jeanette Winterson wrote in her recent Guardian article on repetition in Lowry’s painting http://gu.com/p/3ggkk “At the loom, on the assembly line, on the track, the human being must perform the same task in the same way every working hour. The machine does not tire of this repetition, a repetition reinforced by the uniform lines of the mill windows, the identical terraced houses leading down to the factory.” The repetition of the bricks and windowpane grids in the façade of the Chisenhale building is a reminder of the repetitive labour that went on inside the factory.

In choosing to reproduce a version of the window in etching, I have launched myself into a mass production of my own. Printmaking has always been a way of mass-producing images, but in this piece I am not just creating an edition by repeatedly printing from one plate, but making a series of prints in which the production of the plates is also repeated over and over again.

When I conceived this idea, I assumed that this repetition of tasks would produce an efficiency that would enable me to complete a far larger body of work than I would usually manage in the time, but as I start with the first task of degreasing the plates I begin to realize quite how daunting the scale of this project is. Even with everything set up to clean and dry the plates en-masse, it takes about 5 minutes to degrease each plate. That is negligible if you are producing one or even a few plates, but I have to produce 64 plates to represent the 77 in the window (the unbroken panes can be made with blank plates, used more than once). I do some mental arithmetic and realize that it will take me about five and a half hours of continuous labour just to degrease the plates. This is only the first of many stages required to get an image printed from the steel. At this point I decide I have to split the production into 3 parts like the window itself. There is a balance to be struck between the efficiency to be gained by repeating each task 66 times before moving on to the next and taking account of my human tendency to go mad with boredom and fatigue. So I start with the 21 plates that will represent the top section of the window.

Degreasing is satisfying. The chalk and ammonia make a white bubbling mixture that sweeps across the plate forming a pattern like those painted by decorators on the inside of windows. The plates emerge free of the oily substance that keeps them from rusting; clean and naked and vulnerable and ready to be bitten by the acid. I line them up on their corners against the studio wall to dry and then line them up again, edges touching, to spray the backs with enamel paint to stop the acid eating into the reverse of the plates.

There is a meeting arranged at the end of my second week with artists from Chisenhale Studios. This gives me a good deadline by which to produce my first trial prints. Before I start mass production I need to check that the techniques I am proposing will work and also try to invent shortcuts and efficiencies in order to save time later.

My initial idea is to print out photographs of the individual windowpanes and project them onto the plates with a Tracer Projector, then mask off the areas I don’t want to bite in the acid with sticky backed plastic. There are several problems with this. The first is that my studio is very light and being summer, stays light until past 9pm, which means I will have to carry out this fiddly process for all the plates in the middle of the night, or buy two large pieces of very good blackout material. Also, it is very time consuming, and results in a fuzzy image that leaves a lot to the imagination when transferring it to the plate. After transferring a couple of images this way I realise that it would be much easier to trace the photograph directly from the computer screen and then use the tracing as a template to cut the plastic before sticking it onto the plate. Fortunately my computer screen is just large enough for me to expand the photographs of each pane to exactly the same size as the plates, if I turn the images sideways.

I take 3 trial plates to the etching studio. I have not had that much experience of etching steel. Ian assures me that I can deep bite the steel for 20-30 minutes in 1:10 nitric acid and will get a deep black without the need for any aquatint, but I am worried that I will mistime it and end up with a drab grey. Also steel has a natural tooth unless polished, which results in a grey plate tone on the print, whereas with copper or zinc it would be almost white. So I could end up with everything in shades of grey. In addition I have never used plastic to mask off areas before, will it work, or will the acid seep under the edges? Why am I trying out so many new techniques on such a massive project with such a tight deadline?

The first print is a success. The black is incredibly black, the edges of the shape, sharp and glassy. I experiment with over-wiping the background with muslin to remove most of the plate tone and with leaving the plastic on the plate to print (the plastic has no plate tone, but does have scratches, which I quite like).

After the prints have dried I pin them up on the wall of Studio 4. I am excited. The voids have been given a black velvety form. They are figures now. They have come out as I wanted, but I am still surprised to meet them. When the artists from Chisenhale come to introduce themselves to me and to discuss their upcoming project to mark the 30th anniversary of their colonisation of the derelict factory, they form silhouettes against the window grid in the studio that echo the shapes in my prints.

This is why I like to make things: So they surprise and please me with their material presence and then I can watch as people and things interact with them.