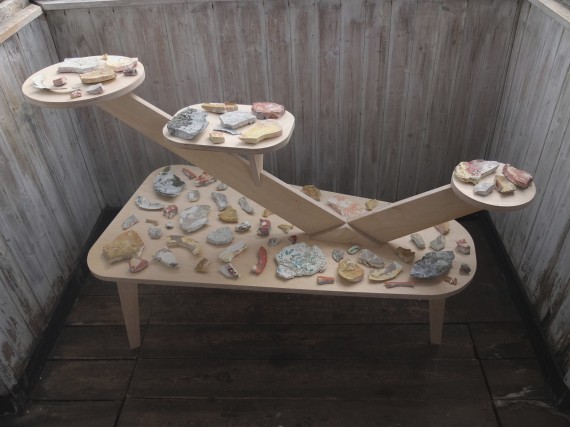 I was aware of PEER’s exhibition programme, initially through their on-line presence and have become increasingly interested in what they do since a few close contacts of mine have worked with them.

Before meeting Gemma from PEER at my studio I had been putting into place some of the practical advice given by previous mentors and also by this stage had been thinking even more reflectively and brutally critically about the work and my ongoing plans for works and projects.

It was fantastic to have such an in-depth conversation with Gemma as we were seemingly talking about the work on view in such detail which hadn’t necessarily come up in previous conversations. I unusually launched straight into my bang up to date ideas which were exactly that – pure description and a few photos or diagrams. I felt it really important that Gemma knew I was working on these as well as seeing the newly finished panel paintings which I had already shown to previous bursary mentors; it was a great opportunity to speak my newer ideas aloud and explain whilst making links to the paintings as well as getting immediate feedback about the ideas.

I think Gemma is extremely supportive in many ways and completely understands artists’ practices and the important stresses but incredibly individual nature of them. This is, I guess, quite a general comment you may expect of someone who is either a gallery manager or curator, however it somehow seemed more genuine ; extended beyond expectations and seemed finely tuned into the artists’/my aims for the work. She keyed into various potentials; explaining perhaps what she found most interesting as a viewer.

We also spoke in summary about; surface, the human scale of my works, pairings/curation of the work and what relationships she could see (visual and conceptual)  John Soanes Museum, other relevant artists’ work for a variety of reasons, archeological finds, Wysing Arts Centre, UCL Rock museum, artists‘ publications, blogs,

Gemma had looked extensively at my now (I think) completely obsolete website (COMING SOON) and said she found it really informative and useful to see so many years’ work on the site – a comment which is practically in complete contrast to most mentors’ advice so far, which was intriguing. She thought also that perhaps the term ‘archive’ somehow shelves older work too much which is actually still relevant in some strand or another.

During our conversation about the work itself we talked thoroughly about issues of display which is increasingly pertinent to my current practice (over the past couple of years); more to be talked about soon.

Gemma also thought that the human scale of my works was very important and something which is completely intrinsic to the form and content of the overall practice.

Gemma made some really poignant observations both in general and about individual works, which at the time was good to hear and also in reflection very useful. She was also interested by the drawings as an active tool and commented how they were themselves exquisite. In relation to these drawings we continued to discuss and question rather open-endedly the need/purpose or necessity to expose your source and if so to what explicit extent….

Furthermore, in the weeks since our meeting, Gemma has subsequently given her advice directly with the obligatory artist documents; which was great and I think has really cleaned  up both the C.V & Statement. As with the CV, the more exhibitions, publications etc. you have  sometimes simply add to the growing list, whereas it is so helpful at certain points to take stock and look objectively at what the overall document looks like and to refine the information.

Gemma Lloyd is Gallery Manager and Curator at PEER