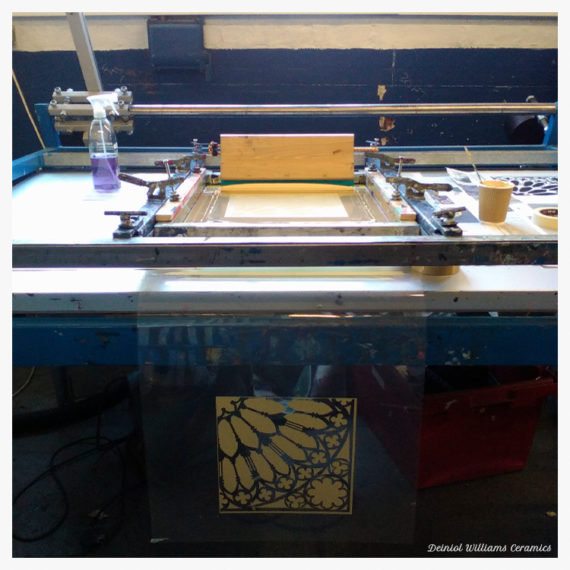 As part of my a-n artist information company bursary I returned to Hot Bed Press in early June and again in July to attend two more screen printing courses. The first was the ‘Screen Printed Poster‘ run by Nick Rhodes, the second was the ‘Straight to Screen‘ with Mandy Tolley. Both courses offered quite different ways to work with screen printing compared to my earlier introduction on the ‘Reduction Screenprinting‘ course.

This course was run by Nick Rhodes, an illustrator whose company Switchopen is well known for their band and festival poster designs. His course concentrated on how to create a design using up to 3 different screens, and also learn about various tips and tricks used by screen printing artists within the industry.

This course afforded me the chance to experiment with more graphical images and designs, and therefore I decided to create a poster for a friend’s band. The design was created at home on my computer ahead of the course. Each colour layer was separated and printed out onto A3 paper in pure B&W.  These were then taken to a local reprographic shop to be photocopied at the highest density possible. If the photocopy isn’t dark enough it can’t block the light which means the image isn’t burned clearly onto the screen later on.

Although most of the basics of screen printing were covered in the previous ‘Reduction Screenprinting’ course with Mandy Tolley, it was good to refresh my memory: Nick showed us how to coat a screen with light sensitive emulsion, burn an image from an oiled B&W photocopy (a cheap and effective alternative to expensive translucent film), register the image, mix up ink, and how to print correctly.

We learnt an alternative way to register artwork using each oiled photocopy to line up with the previous print (as opposed to using a temporary print on clear acetate film which we used on the previous course). Although it proved tricky at first, it did yield accurate results.

Throughout the weekend, Nick explained that there isn’t necessarily a ‘correct way’ of doing things with screen printing. Also, he explained that you don’t have to buy all the expensive kit and materials – there are many cheap and easily accessible ways to work with screen printing, such as using washing up liquid instead of expensive screen degreaser, or building your own developing box using cheap security lights. We were even given plans on how to build our own screen printing vacuum table using a normal household vacuum cleaner.

At the end of the weekend I was fairly happy with the final results, however, it seems that my original photocopies (which we used to burn the screen) were not dark enough, and consequently the final images were not very clear and meant the print was a little blotchy in places.

Having built up my confidence on this course, it looks increasingly likely that I may end up building my own screen printing setup in my studio at some later date. The scope to create screens and print at short notice and have the ability to develop ideas far more quickly is very appealing.

The next and final course was a one-day workshop with Mandy Tolley. This workshop was quite different to the previous course with Nick Rhodes. It was a lot more expressive and I didn’t work from pre-printed artwork compared to the last couple of courses.

As this was a one-day workshop, we had to work fast which I found to be quite refreshing. Normally I work at a slower more considered pace, however I found that that I had to work more spontaneously, and not get caught up too much with the intricacies within the design. We were shown on this workshop how to draw and produce marks directly onto ‘fake grain’ acetate (an alternative to ‘True Grain Acetate‘ which is very expensive). The grained acetate is available in A2 size from Paperchase at a fraction of the price. We had access to a variety of materials however I mainly used bold opaque pens and chinagraph pencils.

We began with creating a background using a blank screen, masking off areas with newsprint. Rather than cutting the newsprint, I decided to tear it so as to try and create a more ragged print edge . When it came to printing, rather than use one ink, I mixed two together directly on the screen with my hands, being careful not to push too much ink through before dragging the squeegee across. Consequently, each print comes out slightly different.

Finally, after using the fake grain acetate image to burn onto a screen, the top layer was printed to produce the finished artwork. This was a great way of working as opposed to the more rigid way of using oiled photocopies.

This free-flow technique of working with screen printing has opened up further possibilities I had not considered, which I hope to apply to my ceramic printing development.

The next stage in this exploration is to apply all the knowledge to my ceramics practice. I have already invested in a screen printing kit with a view to printing some ceramic prints which I will transfer onto a new body of work. My next blog post will concentrate on the production and development of my own ceramic printing.