The Norse god Odin has two pet ravens, Hugin and Munin.  He sends them out each morning to fly around the world and gather news.  When they return they sit on his shoulders and tell him all they have seen and heard.  Their names come from the old Norse language and are generally translated as Hugin = Thought and Munin = Memory.  In a verse from the old Norse poem Grimnismál, Odin says:

Over all the world

I worry for Hugin

But I worry more for Munin.” 1

The understanding here is that the ravens are spiritual extensions of Odin and if they do not return he effectively loses a part of himself.

There are times as you get older that your own faculties of thought and memory are not as dependable as they used to be.  I am not necessarily talking about the onset of diseases such as Alzheimer’s but just the recall of certain words or names that shift position just as you are about to speak, as well as when you can only describe what it is you mean in a roundabout way because you can’t remember the exact word.  Recently I was making a cake and was looking in the cupboard for some ground almonds, but the only word I could summon for this ingredient was ‘almond dust’!  Close but not quite right.

Watching the ravens fly and call here in Blonduos and with a concern from time to time for my own thought and memory I find I have a possible theme to work on.  I am felting, knitting and layering with black wool to expose gaps in and around the connected fibres and to tangle and knot other fibres that are not already broken and fragmented.  It somehow feels appropriate. 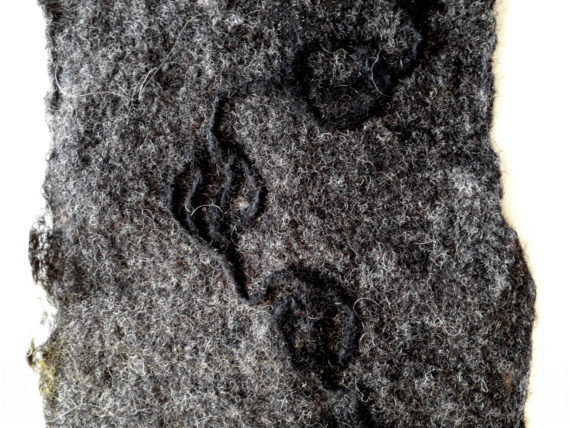 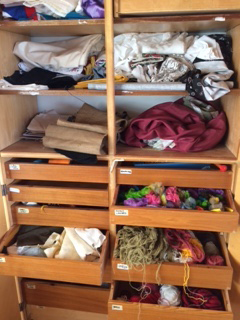 Looking around the studios at Textilsetur here in Iceland, traces left behind by textile artists who have passed through the place over the years peep out at you wherever you look. From every, shelf and drawer, tumble discarded and leftover materials, jumbled up yarns and warp ends in boxes, paper bags of washed horsehair and greasy Icelandic sheep fleece in carrier bags. Even the back stairs down to the basement, the wooden treads worn and warped from years of footfall trace the preferred route of the students who were schooled here between the late 1800’s and 1974. 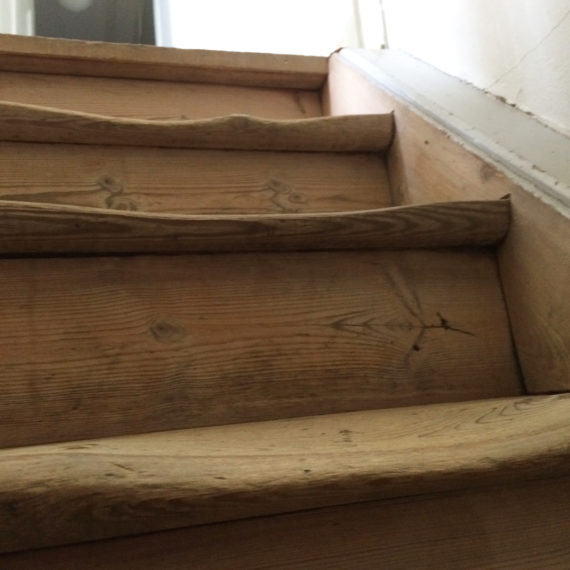 I had already decided the structure of the weaving I planned to do, before I arrived and it seemed to me the essence of those ‘leavings’ was an appropriate theme for my work. 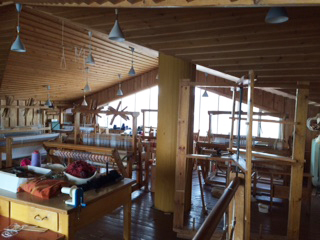 It has taken quite a while to set a loom up to weave. The looms are rather antiquated countermarch and in need of some tender loving care. The inside of the property is kept very dry and warm and the looms are in the loft space, although there is a humidifier running, they are worn and the wood is brittle. I am glad I had a fairly indestructible monofilament warp with me, which, while hard to see in the rather basic lighting, wasn’t going to catch and break on the odd splinters in the lease sticks and beams. 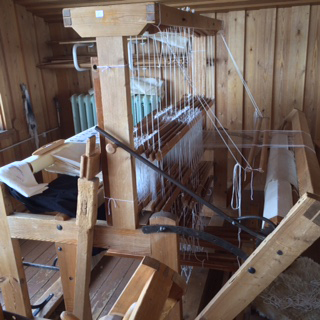 Finally, after nearly two weeks, the warp is set up and I’m ready to go! 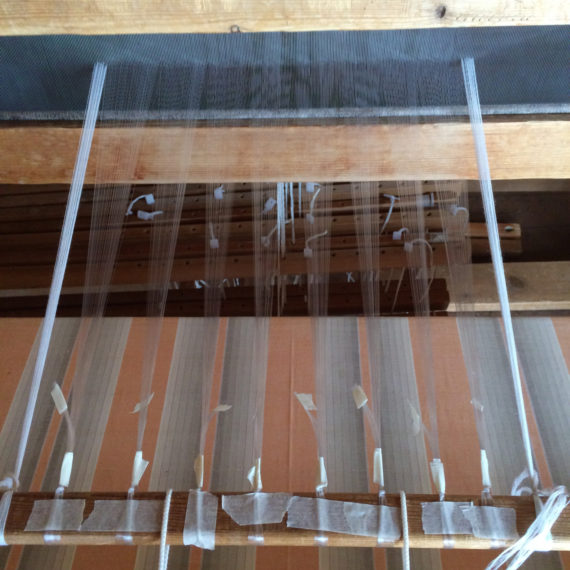 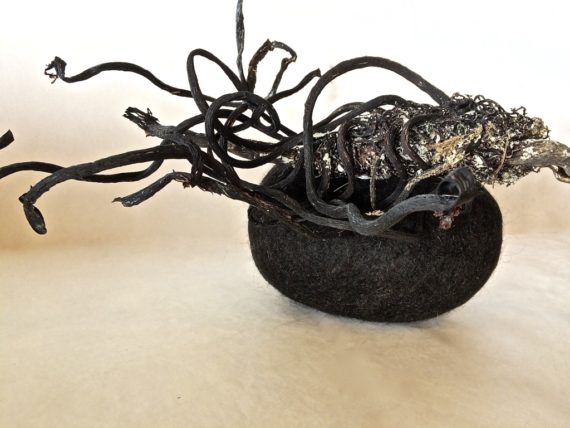 The kelp discovered on the beaches of Kálfshamarsvík, with the blackened,

However, it wasn’t until we returned to the Textile Centre at Blönduós that I found the beautiful, intensely black fleece which was available for us to use. A perfect combination of materials and felting seemed to be the logical choice.

This was a definite gap in my knowledge, but thanks to the expertise of Delia Salter and Tara Kennedy I was soon washing, carding and rolling my own felt vessel. The contrast of hard and soft surfaces created a compelling and haptic form.

I continued to experiment with the contorted stipes and tried to contain them within a looped square structure made with hemp twine. 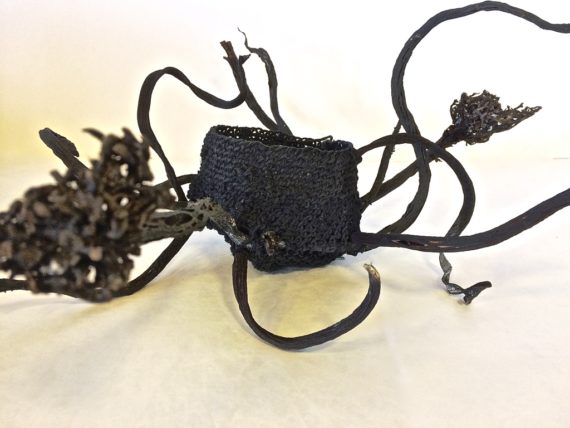 I am interested in the dynamic energy and the negative spaces created by the intersected black lines of the kelp in contrast to the softness and small gaps produced by the looped twine. Lots more work to be done…

Inspired by the basalt columns in Kálfshamarsvík I designed various columnar structures thinking about the concept of a pile of angled forms. I wanted to use Icelandic materials so started to wash some of the sheep fleece available to us. After 5 washes the smell had gone! I carded some black, grey and white and used it to felt some samples. I had ideas of wrapping it around another columnar form creating layers. More samples were made and I introduced some lime green wool inspired by the lichen marks on the rocks. The inner parts became black columns which I stuffed with waste yarn from the looms.

I then found the knitting machine, although in a poor state I managed to make some samples using Icelandic wool from the supermarket in various shades of grey. My samples developed to include holes and uneven hems. These became the outer columnar layer which wrapped around more black knitted columns.

I experimented with adding lime green embroidery in numerous ways and then piled them up at different angles. 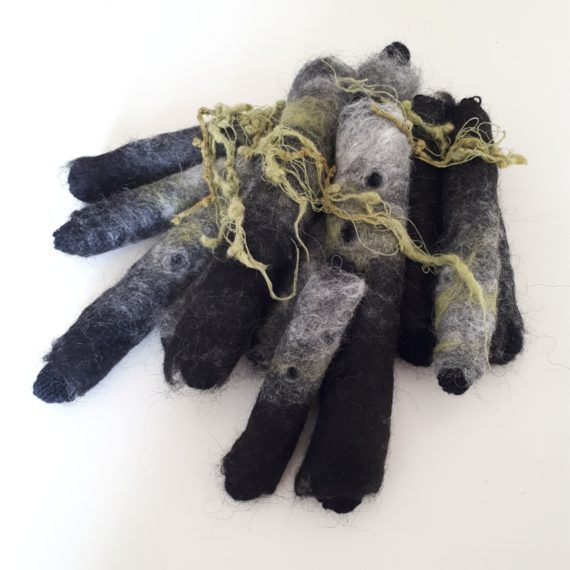 These forms are developing further with thoughts of alternative knitted techniques, fabric wrapping, including other Icelandic materials and also making on a much larger and smaller scale. 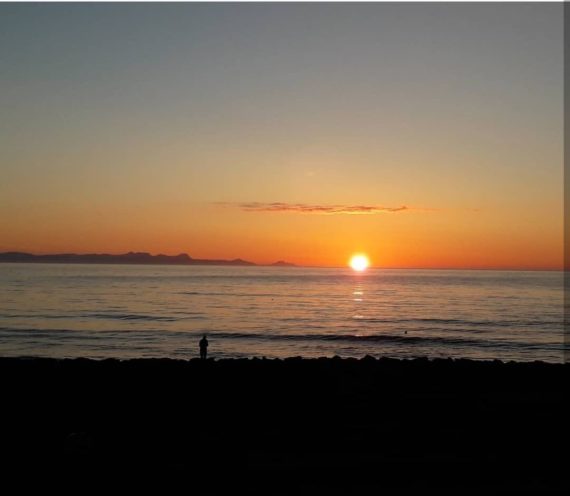 There is a timelessness here at what seems like the edge of the world, daylight from about 3am to nearly midnight and barely any darker in the hours of ‘night’.

Yesterday, waking to watch the sunrise from my window I noted how it was rising only 90 degrees from where it had set five hours previously.  During our last two weeks here the daylight will increase further, by about 8 minutes each day – and after we leave there are still three weeks to go till the high-point of the sun’s year here in the North.

We work in the studios whenever we wish; the space is barely a dozen steps from our bedrooms.  Our time is our own and our work unfolds within this quiet space where, through the studio window, there is a vast view north towards the Arctic where day has already fully taken over from night.