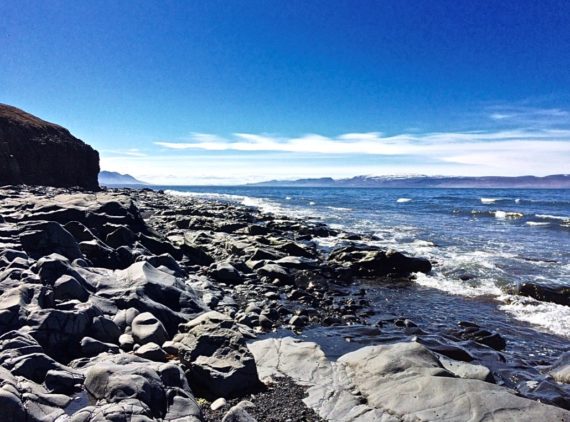 With just a few days to go before we leave thoughts have already been turning to home – back to the familiar, the usual everyday.  Back to family, warm weather, dark nights and noise from outside the home that isn’t just birds or wind.  Back to a world that is more closely wrapped around us, where streets and houses exist in constricted spaces unlike here where the view from wherever you are is of miles and miles of land, sky, sea, mountains.  We expand our lungs to breathe in this pure air and we expand our vision so that we have begun to feel completely at ease with the space around us, aware and in awe of our small presence in this seemingly endless landscape. 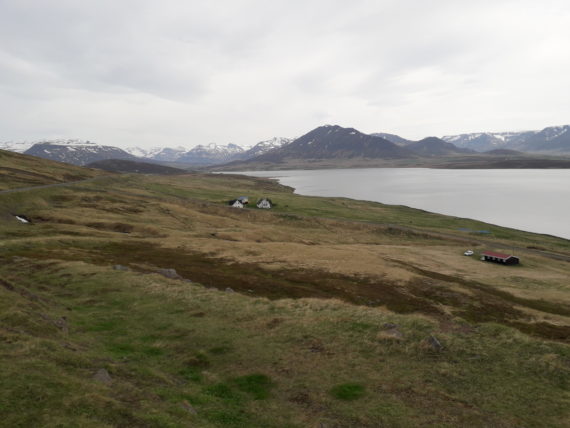 Leaving here is inevitable but Iceland won’t be leaving us so easily.

The inspiring and dramatic beaches at Blönduós

The process of looping allowed me to carry the linen yarn with me as we travelled and continue to make on the journeys. After a visit to the Herring Era Museum in Siglufjörður, I became interested in the way the fishing nets and ropes were tied in lengths, coiled and stacked. I began to think of the looped baskets as sacks and how their shape can be defined by what they contain.

Using linen, cotton and jute yarn and string, I made a looped basket from the the odds and ends left by others from past residencies. Deliberately leaving the joins visible to indicate the odd lengths of the left over or cut off yarn.

Once made it needed to be filled with something. I took it down to a local beach to fill it with black pebbles, but then realized the black sand would be so much better. I could see how the sand could represent the Icelandic sea salt produced with geothermal energy originally in the 18th century and revived in the present day.  The recent popularity of flavoured sea salt and the addition of charcoal to resemble lava to some brands only added to the analogy.

Once filled it begged to be returned to the sea.

I recovered the battered ‘sack’ and brought it back to the studio to dry out naturally. The sand gradually fell through the holes of the looping as it dried and the linen became matted with the wetness and salt of the sea. Its form has continued to change and sag as the sand settled and dried.

To further develop this piece, with the help of  Kurt Gardella, also at the centre. I have added a small amount of Icelandic raw clay at the base to fill the holes and contain the sand. This is an area for further development back home in the rich clay soil of Hampshire.

I am so pleased with this piece as it seems to demonstrate how being here over this month has presented me with the opportunity to slow my thinking and allow things to seep into my consciousness in unexpected ways. I feel I have gradually settled into this place and it has shown me how making is profoundly affected by place. 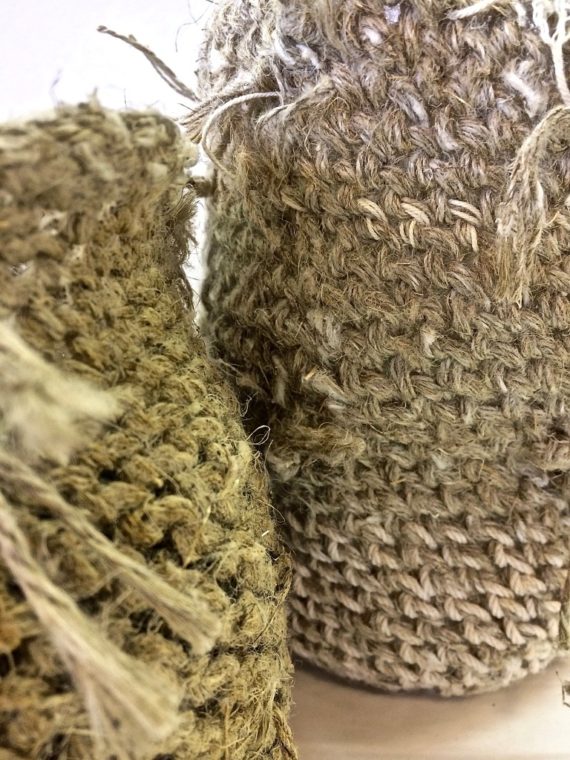 I made a companion piece and the two will be shown in  The Latch String Is Always Open at Textillistamidstod, Bonduous  on 29th May 2019. This exhibition will include finished work and work in progress of the May Artists in Residence at the Icelandic Textile Centre. 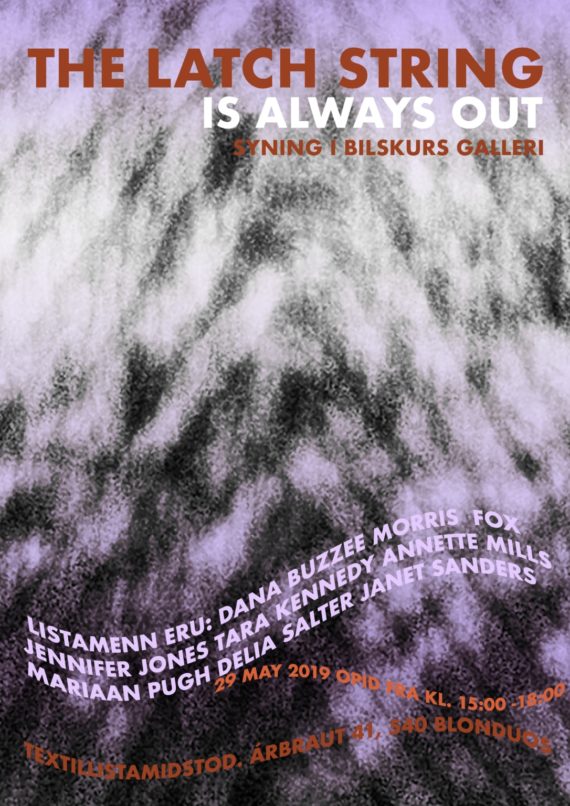 An interesting diversion, came about today as I was investigating the potential for making coffee. I located a filter coffee maker on the top of the kitchen cupboards. It was a little dusty but I figured if it worked it would clean up. I was however, a little surprised to find the filter paper still full of grouts in the machine, it was in working order though and so it was scrubbed up and put into action.

Later I rescued the old filter paper from the bin and emptied it out. It struck me it was another trace of previous visitors to the centre and I thought I would incorporate it into my work. 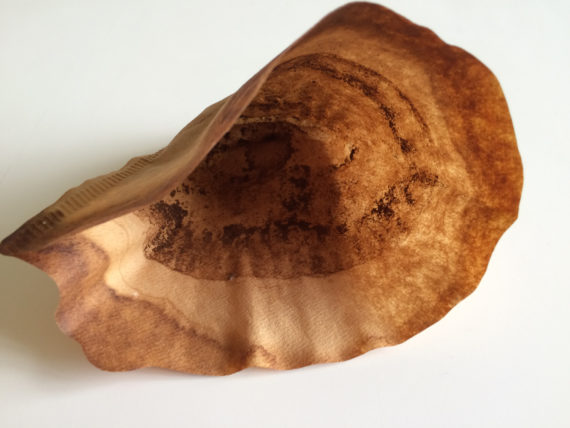 I decided to use the monofilament warp for this piece, it wouldn’t detract form the stains on the paper and interspaced it with a white cotton that slipped against the monofilament making a contoured lines.

I really like the marks left by the coffee, water and grouts left on the paper. Its a pleasing piece. 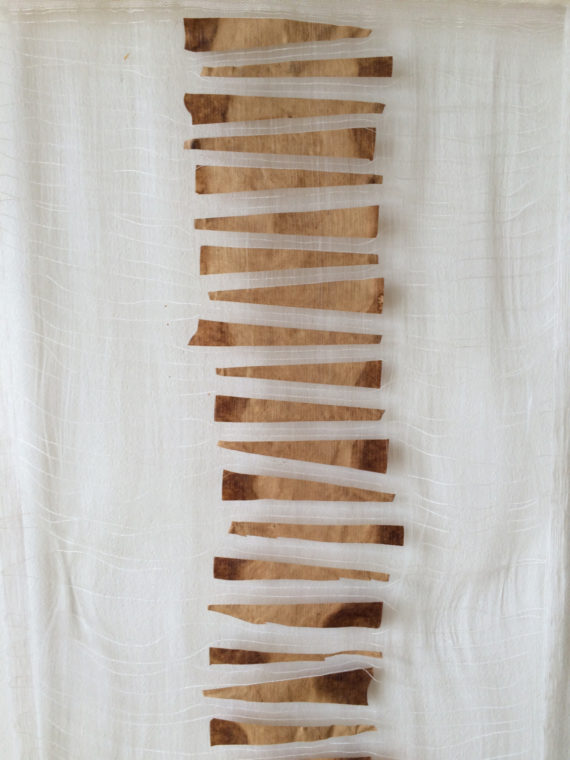 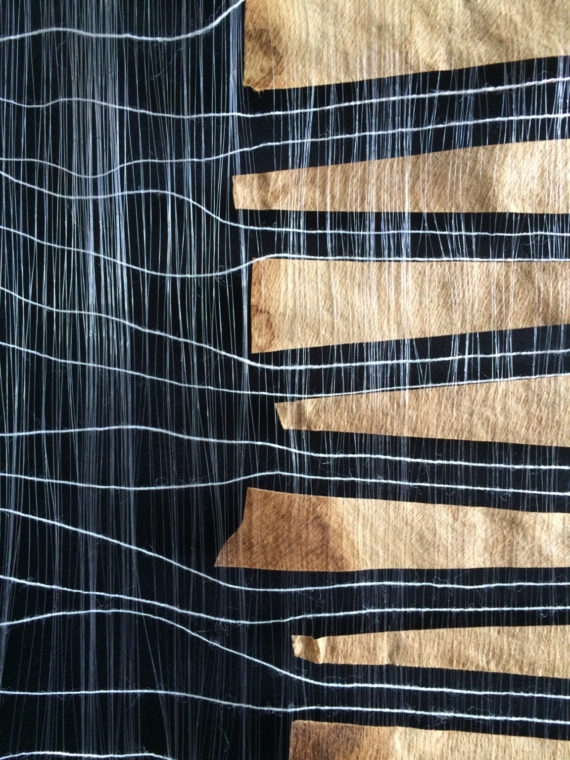 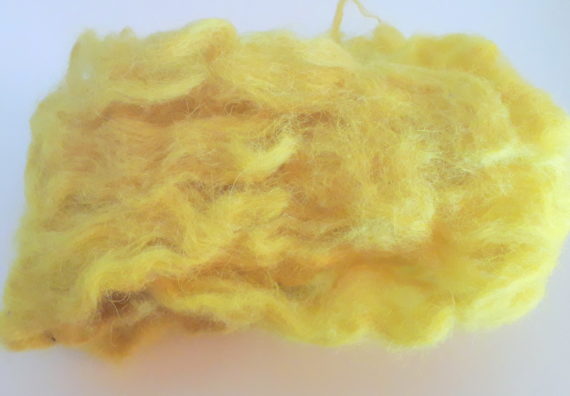 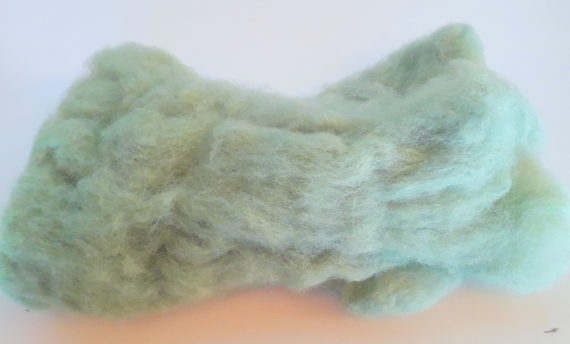 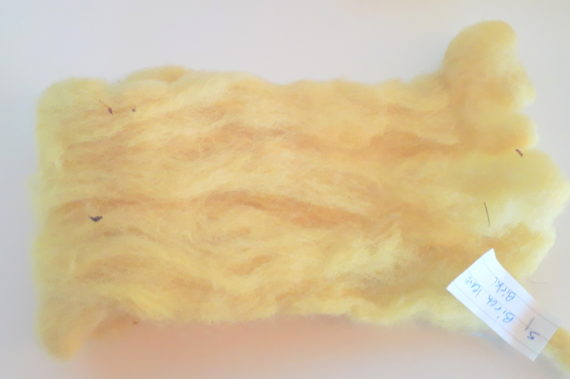 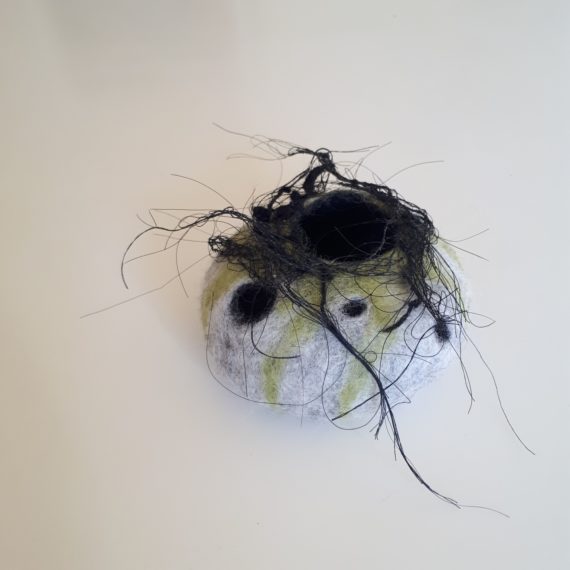 Although I have done a little felting before making a bowl was something new. Fellow Textile Echoes artist Delia was creating several felted bowls and then Annette with Delia’s guidance decided to make one too. I thought it might be an idea if we all made one in a collaboration project. So, with Delia’s help we all made our own bowls putting our own mark on each one. I used the sheep’s wool we had access to that I had washed and carded along with some we had bought.  I couldn’t resist putting some holes in it and then stitched on some stiffened embroidery using horse hair, wool and thread to finish it off. 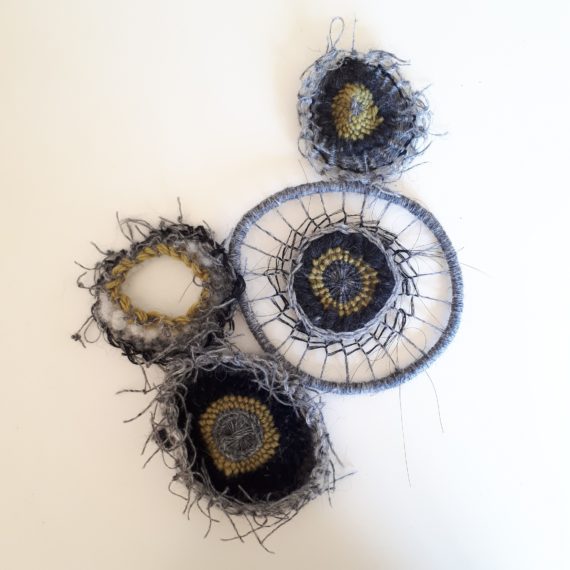 Next, I decided to try some circular tapestry as I wanted to make rounded pieces to join together inspired by some of the unusual floor formations made of the tops of the basalt columns at Kálfshamarsvík. I set to work on making a circular frame. Annette advised me how to soak some cane I found in the studio and then showed me how to make a good join so it wouldn’t overlap. I then made a warp and started to thread yarn around it using various stitches. After completing a few I decided I preferred the reverse side. I made several but will stitch them together when there are a few more. 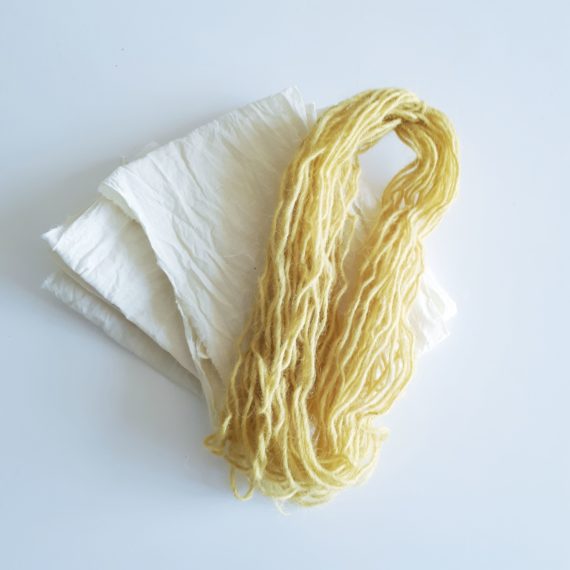 As I knew there was a small dye room here at the Textile Centre, I thought I would take the opportunity to do some natural dyeing.  Having only done chemical dyeing in the past, this would be another new experience. With Delia’s knowledge of suitable plants to dye she explored around the centre and came back with some lupin leaves. We boiled them up and I placed some wool and some cotton fabric in the pot. After a while I took them out and they had become a beautiful lime yellow. I will use them in my Continuous landscape piece. Knowing I dyed it myself (with a lot of help from Delia) has made me want to explore this more – a project for when I return home.