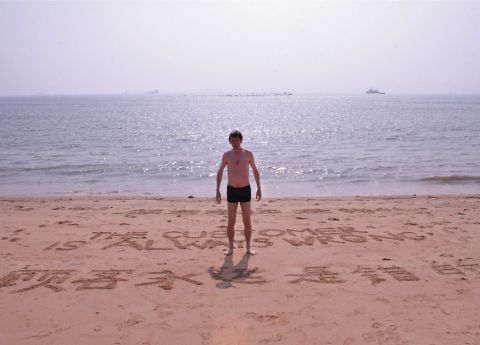 This blog will follow the performance project The Customer Is Always Wrong, from planning it in the UK, making and showing it in China and then adapting and presenting it in Europe.

I was invited to COART festival in Lijiang Yunnan to give some performances and a workshop last week. It was the occasion to perform The Customer again and this time on a town square with a packed public listening to my every tone mistake and mispronunciation.

Air France / KLM still have not paid the refund they promised so I have continued to pester them on Twitter. It is quite good in a way that these companies have to accept that if they want to occupy the space of social media they should expect to hear from angry customers from time to time.

It seems to have happened that I am now living in China! Well, more precisely, studying. I have been here three months now and for some reason known only to the government’s internet censor, a-n is now blocked. Who was it who wrote about …! But yes it is blocked and I am only able to access this blog through a VPN server. That’s a pity because there is a lot to write about but it finds its way into other channels. Actually, I’ve been keeping a photo blog and have found that to be rewarding.

I’m taking full-time classes in Mandarin and that means when I perform The Customer next I should be significantly better than previously, at least in the speaking of the language. That might just cause problems somewhere else in the performance that need some fixing somewhere else down the line. We’ll see when we get there.

Looking again at the performance and reworking a few details here and there I now start to question what was it about in the first place? Unlike producing an artefact that (usually) remains a fixed entity, a performance is slippery and I bring to it different ideas each time I revisit it and have the flexibility to change it a little or even a greal deal. I want to avoid treating the performance as a free for all into which I will play with whatever ideas I currently have about China and so I should be careful to retain some connection with the works impulse and realisation.

I don’t eat meat and have not for over 20 years. It was at first a principled decision, I believe, but now it is more or less a lifestyle and something I don’t particularly question. With the performance there is, to a lesser degree, something of this automatism too. I take it on trust that my impulses back then when making the work were principled and worth upholding and I pay attention more to the form. As such, I concern myself mostly with making changes that I feel are worthwhile and refining things that were previously ambiguous rather than attempting to recapture the original form of the work.

Because this work plays a lot with the mix of insight and incomprehension that being in China for a long period of time brought me, it is very delicately balanced between the two. Since I will be returning in less than three weeks for a longer stay in Beijing, the place in which I situate myself will probably change somewhat. I think I would be wise to make a follow up performance, The Customer Is Often Wrong?

Finally, I’ve been having some fun with making a playlist of music suitable for a Chinese New Year show. I had a curious dilemma. The performance has a lot of kitschy Spring Festival pop and yet I don’t want to portrat China a place of bad taste only. After the ‘premiere’ of The Customer Is Always Wrong we went out and finished up in a club that was full of break dancers and Chinese Hip Hop MCs. While that is not precisely my thing either, I thought it might be nice to add some of that too so that the incidental music is a bit more varied.

A hip-hop take on the year of the horse

Working on the performance for Friday and it is great to have both some time to make a few changes and distance from the work to know what might be a helpful change to make and what should be left how it is. The physical side of the performance is defintely more well thought out now, there is a regular little choreography between all the gestures.

I have continued to tell Air France and KLM customer service about the performamces, maybe they will respond sooner or later, lets see!

The Customer seems to be enjoying a second wind of life. I’ll be performing it once again in London, this time at Richmix on 31st January, Chinese New Year’s day.

Here’s the link for the booking:

Bill Aitchison is a performance artist who has shown his work in galleries, theatres and festivals in Europe, Asia, America and The Middle East. His work covers performances, videos, audio works and texts with the live event being the most central aspect. He has a PhD from Goldsmiths on performance art and performer discipline, has published and made work for radio. www.billaitchison.co.uk