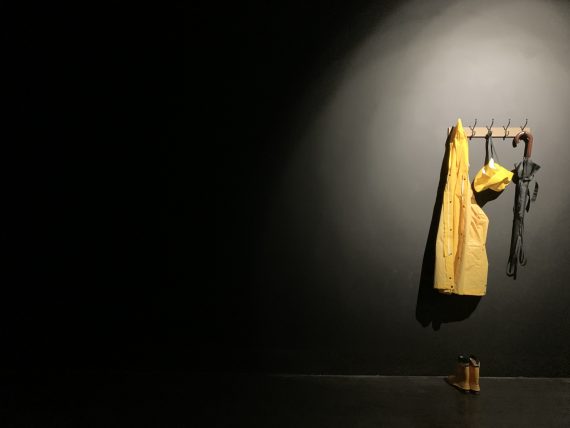 I was Naked, Smelling of Rain – now an installation

Following its’ successful R&D phase funded by Unlimited, ‘I was Naked, Smelling of Rain’ received Arts Council England funding further supported by  ARC Stockton, Disability Arts Online, The ArtHouse and Pervasive Media Studio to be developed into a full scale pourable work. Having worked with Daniel Bye as director, dramaturg, producer and all round roustabout the new version had its first outing at ARC in October.

This has been a curious piece for me. I first imagined it as an installation, but the more I did the research for it the more it was demanding to be a ‘live’ work. I have never had any ambition, secret or otherwise, to be a performer and definitely not an actor. I was really lucky in the R&D phase to be introduced to Daniel Bye at ARC by the amazing Annabel Turpin – CEO at ARC Stockton. Dan would chat to me on the phone and talk through things, not the he was ‘officially’ part of the project – that’s just the kind of person Dan is – generous with his knowledge, expertise and time.

Since getting ACE funding I have totally rewritten the show over 3 intensive weeks with Daniel Bye being the steadying guiding hand. It had its first public showing at ARC in October. Somehow between us we managed a set design and a lighting design – in that particular us there is less of me and more of Dan, although it was collaborative.

So now the full version of ‘I was Naked, Smelling of Rain’ is about 50 minutes long with a varying degree of chatting with audience at the beginning as they come in and settle.

The process of turning it into an installation was interesting. How do you keep the essence of a work whose power is in its’ liveness within a non-traditional exhibition cube which is family friendly. Obviously all the overtly triggering references needed to come out. I used the sound tracks which Duncan Speakman composed and I had improvised over for the R&D and which Dan Bye used to design the soundscape at ARC. The works which I commissioned Duncan Speakman and Tineke De Meyer to respond to my writing and the subject of ‘Naked, Smelling of Rain’ are also included.

I re-edited the travelogue from the R&D to accompany the sound piece. This has a definite aesthetic of being present and moving through the landscape as an active observer. I have deliberately kept a low-fi vibe – avoiding the polished version of a video as it would jar with the original performative work.

A coat rack with a sou’ester and wellingtons and umbrella together with some prints referencing the weather create an overall living room, intimate atmosphere.

Finally, flip dots display a scroll of weather phobias, the names of winds, words associate with loneliness and are so redolent of the sound of rain as they move.

On 27th February 2020 I will be performing the whole show at We The Curious.