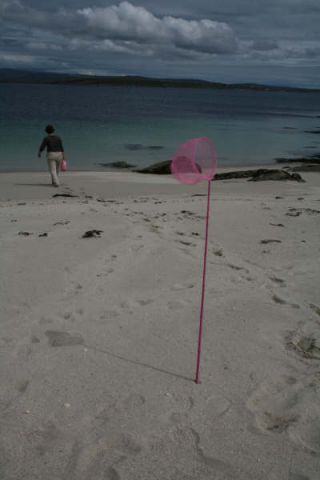 The Inishlacken Project honours artists from the 1950’s and before who spent time on the remote Irish island of Inishlacken, using the place and community as inspiration. Situated one mile off the west coast of County Galway, Inishlacken is now uninhabited. This blog tells the story of my time on the island and the subsequent opportunities that have come my way since my Irish visit.

I have been back from Inishlacken for some weeks and am still reflecting on the experience. The work I made on there was not as successful as I had hoped it would be – but then what is success? Is it a sense of personal satisfaction? Or approval by one’s peers? Or acknowledgment by the public?

I am not sure. In fact the definition of success potentially changes according to one’s state of mind and circumstance. However it is defined in this instance, it was not a good feeling. The photographs (taken most ably by Rosie and Mirja, one of the artists on the residency this year) consisted of a series of scenarios and prompts for a possible performance. Of course it was one that could never take place as it could only be set on the unique place that is Inishlacken. As I mentioned in the last post, I was concerned with the horizon and edges. Maybe this was the problem – my concern should have been with the island and it’s edges rather than constructed ones that served the purpose of sketches for a future work that would take place many miles away from this part of the world.

Anyhow in the sprit of honesty, sharing and reflection I am attaching a couple of the photos with this entry. Thanks to Rosie for taking the shots.

Day two on Inishlacken and the weather ensured a later start as we all woke to mist and fog and a dampness in the air. Once on the island however, everybody started work in earnest – the painters painted and the drawers drew. I went straight to the beach where I did the sheep fleece performance two years ago and thought a lot before gathering found materials and ideas for a possible performance tomorrow.

Last week I took part in a project run by Switch – 11 artists working to realise a paid for performance in the place of two days. One thing this encouraged was the making of quick work, responding to initial ideas and not questionning too much. This is an alien way of working for me but is useful here on Inishlacken when I have only two days to make work. There is , as always a real rapport between everyone, And in addition to artists I have met before are new friends – Mirja from Germany and Susan from Belfast, Alannah from Dublin, plus Noelle and Sinead who did the drawing workshop yesterday.

My ideas for a piece tomorrow centre on Lobster pots, the horizon and above and below. This is partly because I have a performance on a beach in Suffolk when I return and I had already decided to focus this on notions around the horizon, the edge and what it is to understand the point where things meet.

As ever the spirituality on the island drives my thoughts

Since the last post the piece at The Junction has been staged. I think it went ok – difficult to say especially since I was not in the theatre but controlling the performance from offstage. Safe to say that the piece is a beginning and will be worked on to develop it more before a re-showing. The best thing about the event was the camerarderie amongst the artists at The Junction – so much mutual support.

I am writing this from Rosie’s front room in Roundstone. For it is that time of year and I have been really lucky to be invited back to spend time on Inishlacken. The residency this year has fifteen artists, as before writers, painters, conceptual artists and photographers. The weather has been kind with much good work being made today. the first day. Tomorrow we will return mid morning and i intend to make a series of drawings on postcards bought in the village shop. I am keen to explore the link between home and here, the journey around the island mirrored with my journey from England to Ireland.

The Junction piece is gathering momentum and I am quite excited about it. There are a number of things that have been in the back of my mind for a while that are all coming together within it – always a good sign I feel – and today I have been collecting up some possible props and materials to use on the stage. Spent this morning working on the PR text. I find this incredibly difficult but rewarding too. Trying to distill the piece into a couple of sentences is a challenge but sure does make you hone your thoughts and rationale.

Since the last post I have completed the proposal for the Junction and have been on an inspiring weekend retreat with ten live artists from the region, Anthony Roberts of Colchester Arts Centre and Curious – a company based in London who are Helen Paris and Leslie Hill.

It was an amazing two and a half days – inspiring and refreshing in equal measure and so good to have time to catch up with others who are working across the same areas in their practices. Saw some old friends and also met new people.

We ended the weekend with a synchronised swim performance to mark Anthony's birthday. A new experience for everyone – and no one drowned! 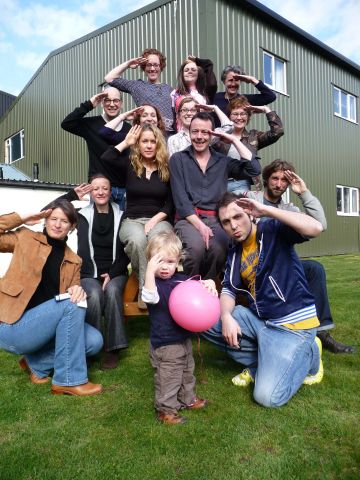