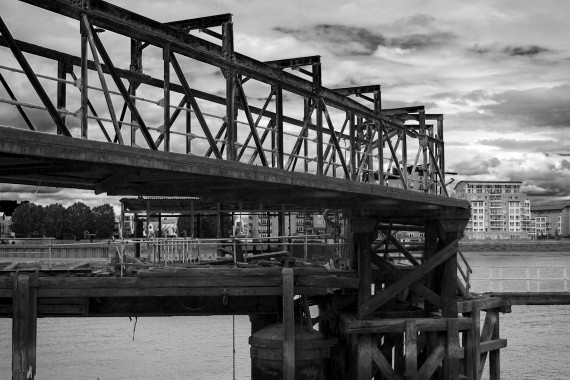 London developed as a functioning port on the River Thames. As our infrastructure and industry move away from natural resources, how do we build new relationships with the natural environment.

Can the temporary spaces of the tidal Thames provide a unique space for social activity? The Intertidal Cinema attempts to transform the tidal beach of Deptford creek into a social space, transporting people back through the history of Deptford, told through a narrative of this unique place. Topographies of Deptford’s historical past are projected onto various structures, transforming the creek into an immersive social space.

The film tells a narrative of place through a conversation with the architecture itself to create a portrait of the urban landscape through the sites connected to how Deptford developed as a Dock. The voices of Deptford are used to animate various sites, the physical space takes on the voice of the social.

The Intertidal cinema will take place as part of the London Design Festival from the 13th-15th of September 2014.

The Old coal jetty that sits in the water at Deptford beach was one of the initial sites for the film.

The wooden structures are uncovered at low tide and were used for unloading and loading coal in out and out the dock. At low tide you can walk up the beach underneath them.

The Old coal jetty which used to function as part of the Docks is located on Deptford beach. This is one of the intial sites we filmed.