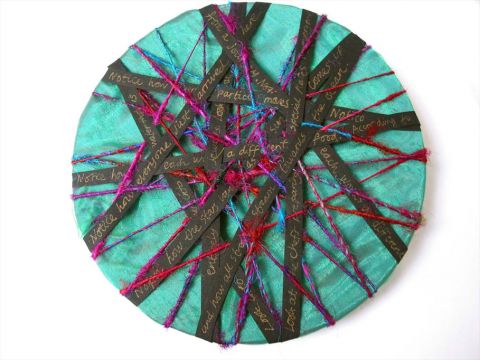 So the interactive ‘operator’ in this new work is The Gift. Here are some thoughts I have found on The Gift while reading Lewis Hyde’ The Gift: Creativity and The Artist in the Modern World’.

‘The Gift is to the Giver, and comes back most to him – it cannot fail’ (Walt Whitman)

‘The Gift that is not used is lost, while one that is passed along remains abundant’

‘A circulation of gifts nourishes those parts of our spirit that are not entirely personal , parts that derive from nature, the group, the race or the Gods’

‘…The Gifts we give at times of transformation are meant to make visible the giving up we do invisibly. And of course we hope that there will be an exchange , that something will come towards us if we abandon our old lives..The tokens we receive at times of change are meant to make visible life’s reciprocation. They are not mere compensation for what is lost. But the promise of what lies ahead . they guide us towards new life, assuring our passage away from what is dying’

And most pertinently for me at this stage in the project:

‘..gift exchange is a companion to transformation, a sort of guardian or marker or catalyst….a gift may be the actual agent of change, the bearer of new life’

I have been working a lot with life rituals and making pieces that mark them in some way – birth, bereavement, cultural transitions within life etc

What happens when I ask people I don’t know to give me things they don’t want and then think about and express what they do now want from the space the unwanted thing has left?

A process of transformation, which is a concept underlying all my work, is what I am seeking to offer up. Firstly in the making of the work, through transforming unwanted things into a group of artefacts with new meaning and context. Also, in the articulation by the Giver of what the gifted item represents in terms of leaving something behind and what new, emotional object can be presenced in their lives for future unwrapping? 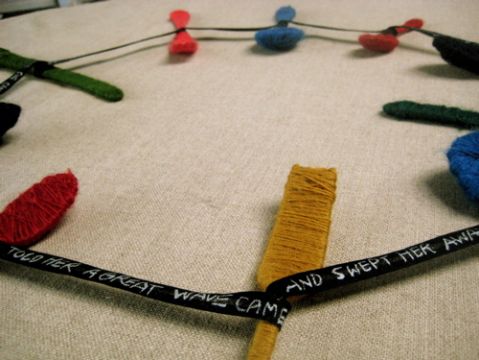 Object number one (001) – my (late) mother’s mobile phone sim card, wrapped in red wool and black cotton thread. What this object means to me is : frequent , caring and inquisitive communication of a mother to a daughter and the passion to pass on and share the narrative of her life openly and freely with those around her.

David Kay, Shape of Things Director, asked me to write something on the relationship of making to my practice and my feeling about not being a ‘proper maker’, as such..!

‘ Weaving was already multimedia: singing , chanting, telling stories, dancing and playing games as they work, spinsters and weavers were literally networkers as well..spinning yarns, fabricating fashions, ..the textures of the woven cloth functioned as a means of communication and information storage long before anything was written down. How do we know this? From the cloth itself’

I began m y life as an artist making drawings, paintings, sculpture…then fell in love with technology and designed interactive interfaces for five years. In 1999 I reached the point where I was in mourning for a more haptic relationship to my practice again. I came apon textiles through reading Sadie Plant’s ‘Zeros and Ones’ while visiting Iran (my mother was a crochet designer who was raised near Tabriz – a famous rug weaving centre of excellence) and seeing the Jacquard Loom and Babbage machines at the Science Museum in London.

Discovering textile media as a place where old school female –dominated programming (since weaving is series of numbers encoded in cloth), the feel and beauty of woven surface, and a space for the interweaving of human narratives could co-exist was a revelation to me and I have been expanding into this space for the last five years.

It seems to be limitless in its potential to enable poetic processes of engagement and to produce at the same time work that can be touched, occupied and read as an anthropological snapshot in time.

I have mainly been working with other specialists to produce large-scale installations – weavers and programmers for ‘The Loom: From Text to Textile’, a sculptor for ‘Crafting Space’ and a whole design production team for ‘The Bibliomancer’s Dream’.

As a multi-disciplinary artist working with craft media, I have often felt outside and in awe of the mainstream of specialist makers who are able to work within and master a specific form of applied or visual art. Now I realise my speciality is in ‘crafting space’ and narrative through materials, words and conceptual ideas, with the very particular skill of defining compelling arenas of audience engagement.

A combination of growing confidence in my own skills and a desire to be more directly involved in the actually making of my work now has a chance to develop into new work through The Shape of Things commission. It is as if have been given permission to make again! I am now beginning the process of collecting, archiving, wrapping and installing what will be up to 999 objects.

We have started thinking of who I might be able to work with in a more small scale way through workshops on the issues of the project. They have suggested a few different groups with an existing connection to the Museum which we will decide on in our next meeting. I am keen to have a very clear sense and outline of what the engagement will look like before jumping into it, and this is bound up with the concept and form of the work itself. It seems to be unfolding itself quite nicely at the moment though, like a gift.

I realise that my process is that I always engage with part of myself first to get clear a to what kind of relationship and meaning I am offering through the work. Part of this is making, which I ma starting to do in my studio. Then I will have a (flexible ) blueprint which leads me to an engagement with others which can be integral to the work. This will be a specific group, an intimate encounter. From this the core questions of the work will become clearer still and I can then offer up the engagement to the mass public through the larger scale piece. It is really like an unfolding.. In this case, the relationship will begin earlier as I am asking the public to connect with the project via an object before the show opens, with little visual knowledge of how it will become part of the piece.

In terms of engagement during the show itself, I think the idea of the public (both those who gifted and those who did not) writing down an ‘emotional object’ The question posed will be broad enough for those who already gifted to reflect on how giving me the object impacted them or what it made space for. For the remaining public, this could be a personal hope, desire, intention, something connected with a desire the future not linked to an real object. This would mean that on a daily basis, text could be written into the exhibited space on textile strips , to contextualise and add layers of meaning to the collection of objects that will form the main artwork. This all needs more specific consideration and discussion with Julia and David but I feel its in the right direction and ties in with ideas around cultural legacy and creating a broad conceptual /visual space for dialogue and diversity which are at the heart of the work.

I have had quite a week of decluttering, and have ended up with a large bag of clothes/ materials as well as a small bag of objects (which I will detail at some point) to begin my wrapping with. It felt very liberating to choose these to become part of the piece, rather than put them back on a box and not know what to do with them, a space got created inside. I also found some video footage from a documentary made about Dying that I was part of, a short piece form one of the other interviewees commenting on my mothers death and its connection to my children which was a very moving moment and got me present to her strong and eternal presence in my life, especially as an artist. Right now I am working on wrapping her rice cookers and feel particularly connected to her, and I know that this process, which feeds into this commission, will bring up some powerful experiences for those who engage with it and allow the emotional space to work for them. I am laying things to rest with gratitude and preparing the foundations of this very public work with my own personal, small scale pieces.