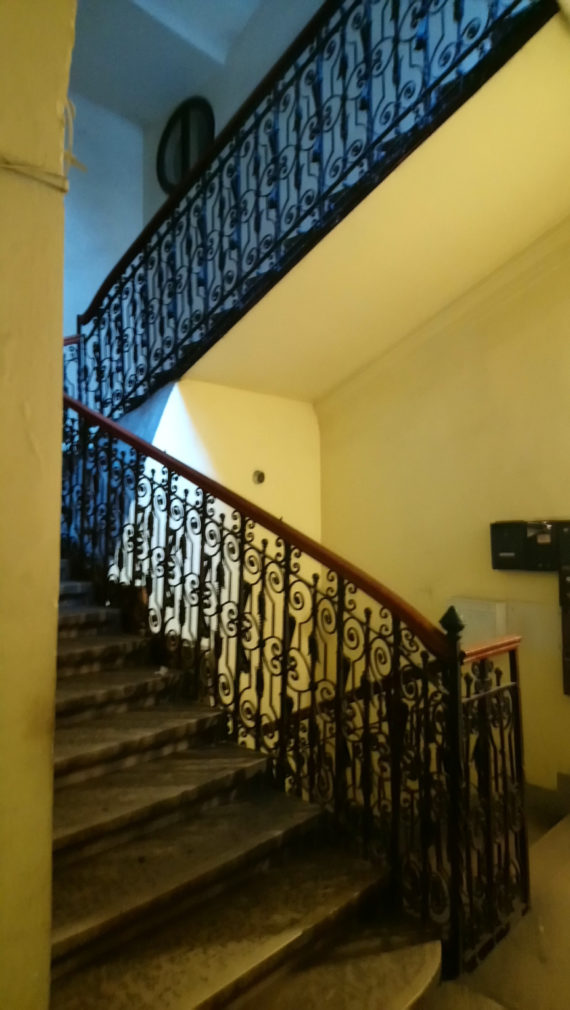 On Wednesday March 21st a dinner was held at the apartment with the stone steps. The guests at this event were the poet and artist,  Marton Koppany and his wife Gyongyi. During the dinner an idea emerged from the conversation around the table. The following is an edited version of the conversation.

Marton: So it’ll be interesting to do something site-specific, sometime, in the street, for instance.

Marton: Yeah. That would be great.

Bob: Where would be a great place to do it?

Jane: To do what?

Bob: Have you any advice if we get arrested?

Marton: As a performance, or real?

Bob: If we were performing something.

Marton: I’ve never been arrested as a performer.

Bob: The arrest would be part of the performance.

Marton: I have an idea. We arrest you. Then you won’t be arrested by the police. What do you think? So before you having been arrested, I arrest you.

Bob: So you arrest me?

Marton: And it will be a performance and…

Bob: Where would we go?

Marton: To the Parliament, of course.

Unidentified voice : What are you doing?

Bob: I could read a terrible poem that’s so bad he arrests me!

Jane: Why don’t we have a competition to find the worst poem possible? Can we do that?

Bob: Possibly. Limericks. Have we got time to do this on our busy schedule?

Annet: We have kind of an open schedule on Friday. There are many places left that we’ve left unseen. Probably everyone can do what they want to, so it’s not too far to see the Kunsthalle, or some other galleries that are nearby. So it’s really up to you, I don’t want to force anything.

Marton: You won’t be there because you will have been arrested.

Jane: We’re open to requests and there’s plenty of time to get arrested in the meantime. I don’t know how quick they are at letting you out, here.

Bob: If you were going to arrest me, where would you take me? Into a car?

Bob: Okay. Have you been arrested?

Marton: In that sense, yes.

Bob: I think we should do this, it sounds really good.

Marton: I can give you a written paper. Signed by me.

Marton: That you are arrested.

Marton: But of course we can do something special.

Bob: But we need to know where to rendezvous.

Marton: At the Parliament. To give you that strong presence, and the historical and cultural background. You are a visitor, a guest, so you can choose when to be arrested.

Bob: Noon is a good time.

Jane: We could draw a chalk square. So you’re arrested. And then we could draw a square the size of an average sized police cell. And then Bob has to stay in that square. Until you get bailed. Maybe they decide not to charge you.

Bob: If Marton’s going to arrest me, it’s up to him to decide what happens to me. I might be taken away…

Olivia: To a spa.

Marton: It will depend on my mood on Friday. So I cannot forsee. Because, bureaucrats, administrators, are like child, so they have moods. They can be moved or hurt. They can be very kind. It depends.

Bob: And you have a lot of bureaucrats working with you.

Marton: Of course. Not working with me, but working on me.

Jane: In Britain, if you’re arrested, you have to be charged within 24 hours. In Hungary, how long can they hold you before you’re charged?

Marton: I don’t know exactly. In theory at least you have the right to call your lawyer. But as far as I know it doesn’t happen in each case.

Gyongyi: Yes, but there must be a time limit. It’s not that you can be kept there endlessly.

Marton: It’s probably more than one day. I would say it’s two days, but it would be more like three days in your case.

Jane: We’ll see you back in Manchester.

Bob: Give my lawyer a call while you’re over there. Well I think this is really exciting.

Jamie: We’ll all get the train.

Marton: It may be for an indefinite time.

John: And is he allowed to leave the country in this time?

Marton: As far as I know, at this moment – it can change, of course – he can do anything he likes. So it’s not about doing or not doing, being in a certain place, or leaving the country, it’s about a mental situation. Which will remain, from that moment. And from that moment you’ll feel like a Hungarian.

Bob: Yes, I want to be able to write about it.

Jane: Well then, this sounds great.

Bob: Will people notice the arrest?

Marton: It depends on their sensibility. Because you will look different.

Jamie: In fact, we haven’t visited the Parliament.

Bob: We’ve seen it from a long way off.

Marton: I am 65 and I have never visited the Parliament.

Marton: It’s difficult to avoid it as a view, of course. It’s too big.

Jamie: Like a Parliament. Very grand and very showy.

Marton: It’s the biggest one in continental Europe.

Gyongyi: It was for a bigger country, before the First World War.