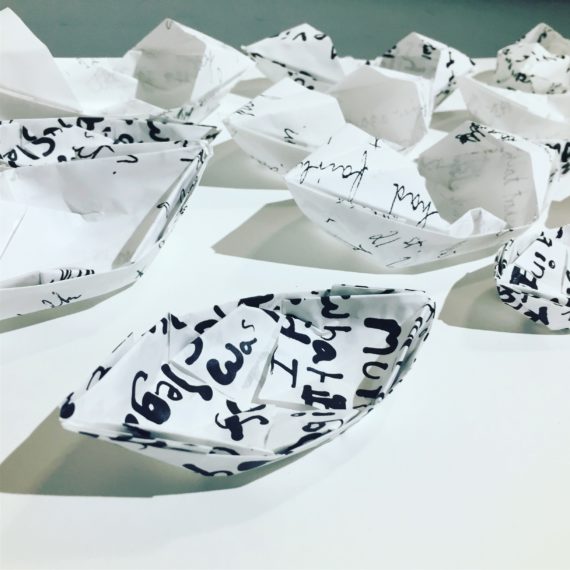 I went to Norway at the start of this month. Then I came back and spent 23 days trying to write a blog post about it. I’m not exaggerating (well, not much) when I say I sat down every evening and tried to get something down, but I just couldn’t. It’s partly because my MS fatigue has been off the scale since I got back, a cosmic trade-off for the fact it wasn’t too bad while I was in Norway I guess.

It’s mostly because I’ve been psyching myself out. I do that sometimes when I’m working on something I care about. I really want to do a good job and nothing I make or write feels like it’s good enough so I procrastinate instead of doing it. The longer I put it off, the more impressive I feel like it needs to be, the more I hate the work I make for not living up to my unrealistic expectations, the more I hate it, the longer I put the work off. You get the idea. All this is just a long-winded way of saying, writing this blog post nearly killed me, so as you read it, please be kind. 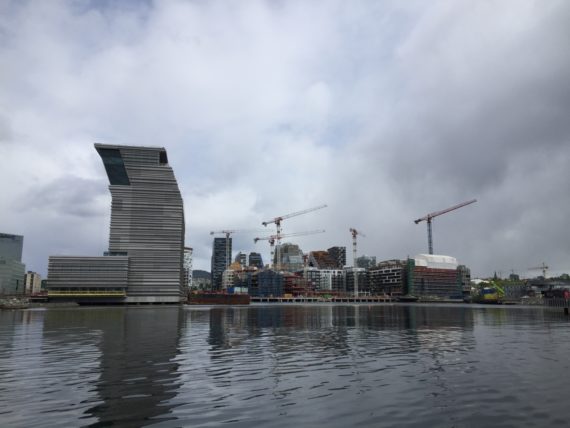 I was in Norway as a sort of pilgrimage to my Great Grandfather, who was regularly sailing from Newcastle to Oslo and Bergan with the Merchant Navy. The ship he was serving on had to flee the country at the outbreak of WWII.  He used to joke that he sailed round half the world twice with the merchant navy. I don’t know every where he went, but I know it was a lot of places, most of the world. Norway was the only place he ever wanted to go back too. Having been there now, I get why something about it lingers in you.

There’s so much I want to say about my time in Norway. The mystic beauty of the fjords, the way the air felt; an encounter I had with a singer sewing machine on The Fram (that’s the ship Amundsen used on his expedition to the south pole). And the fact the apartment I was staying in turned out, by fate or coincidence to be on the refurbished docks that 80 years ago all merchant shipping was coming out of. I launched some of my paper boats into the fjord. I’d love to tell you about it but I don’t have the words yet. 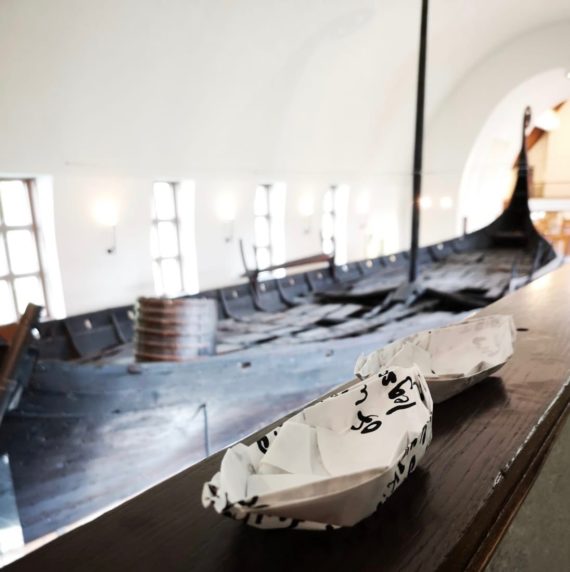 Here are some of my origami boats with a Viking ship.

Here’s what I have figured out how to say. I loved my time in Norway, I miss it in a way I didn’t expect. When I was there I went to see these Viking ships, the best preserved Viking ships still in existence. I couldn’t get over them – because they were beautiful and easily the oldest thing I’ve ever stood in front of and just seemed so small in comparison with the sea.

They looked so fragile compared to even the most basic of modern ships, like the ferry I took to visit the museum. But they worked, didn’t they? Vikings sailed their boats as far as North America, far enough for peacocks to end up as grave goods in Oslo. Those boats were strong enough to get people where they wanted to go.

That’s the lesson that finally got me through trying to write this post. Maybe it’s not everything it could be, maybe I’ll build better versions in the future, but it’s the best I can make it tonight, and hopefully, it’s enough to get us where we need to be.

Wow, It has been such an amazing three weeks since I last blogged. I went down to London and spoke at the Emerging Artists discussion at the Tate Exchange. (I got a charcuterie plate and ate it looking at St Paul’s, it was super fancy) I had chance to see the Jenny Holzer exhibition at the Tate and the Tracey Emin exhibition at the White Cube. (Tracey, if you’re reading this I’m a fan of the new stuff). 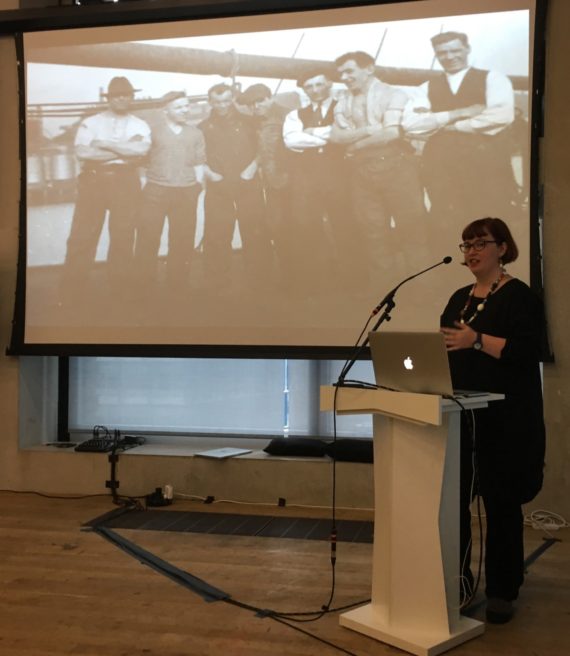 I then travelled back to Yorkshire and speedily folded 30 origami boats to finish off the fleet of 100 for The Art House Wakefield Micro Commissions exhibition on Wednesday (I had a coffee and a cannoli at the café there, it was also surprisingly fancy).

I somehow also squeezed in my second session in the ceramics studio and learning to use a laser cutter (You won’t get away from me now James Bond.) It’s been incredible, to have so many exciting things to do, and I’ll be honest, I was worried how I’d get it all done with my MS fatigue.

On Friday I was feeling healthy and accomplished, walking around thinking “See I can do everything after all”, and it’s weird because that feeling of wellness is so often accompanied by a feeling of guilt. Like I’ve somehow been lying to myself and everyone else this whole time. Like I don’t deserve to be getting this bursary or the amazing opportunities that come with it because I’m not really sick enough, am I? That’s the thing sometimes with invisible illnesses, sometimes they can even feel invisible to the people who live with them. I have this lingering fear sometimes that secretly it’s not my illness that stands in my way, but myself, that I’m lazy (I’m really not) and disorganised (maybe a little bit) and a chronic procrastinator (Okay, this one is true). 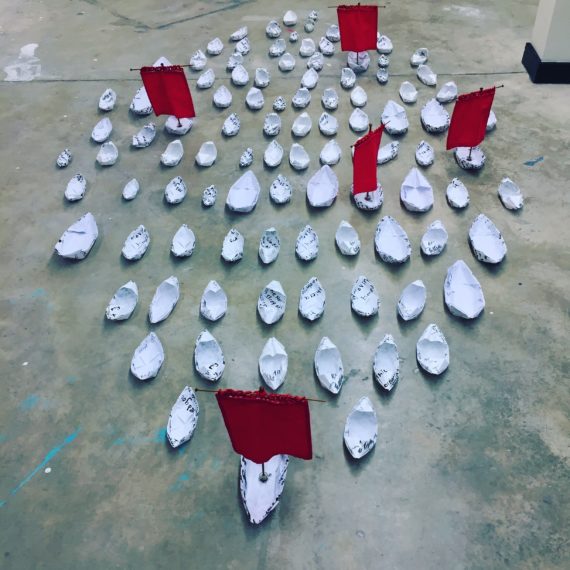 These feelings are very relevant to a conversation I had with @kirstymhall on twitter after my first post about the Seaworthy Vessel project. She commented that the notion of seaworthiness applies to an aspect of the disabled experience I hadn’t previously considered for the project – the ways we are constantly having to prove we are worthy of aid or perceived advantages, like access to disabled loos or seats on public transport or whatever. That’s where an invisible illness can be a real Catch 22, I’m sick enough to be disadvantaged but am I sick enough to be worthy of help? This feeling of questioning my own worthiness is definitely something I want to explore more as the project develops.

Anyway, it turns out I didn’t need to worry so much about being an MS fraud because I tried to keep up my whirlwind of activity this week instead of resting and I am a total wreck. (I did pass my driving test though, that’s irrelevant but I’m a braggart.)

My absolute favourite thing about getting to share my work in progress is when people say something that helps me look at the work in a new way. So If you do have any thoughts to share, I’d love to hear them.

PS. Esmé Weijun Wang explores the fear of being lazy while chronically ill so beautifully and thoroughly here, I’m reluctant to write about it myself. I just want to link to the essay and go ‘what she said’.

Hi, my name is Letty McHugh, I’m an artist and a writer and one of the recipients of the Emergence Bursary. I wanted to write an introduction post to my practice and the project I’m working on for the bursary, but I’ve been putting it off for two weeks because it makes me so nervous. My Mum once told me if you are nervous in a new situation you should just acknowledge it out loud and then you’ll probably find out everyone else is just as nervous as you. I don’t know if that advice applies to this situation, to be honest, but on the off chance you are feeling fluttery – don’t worry, we’ll get through this together. 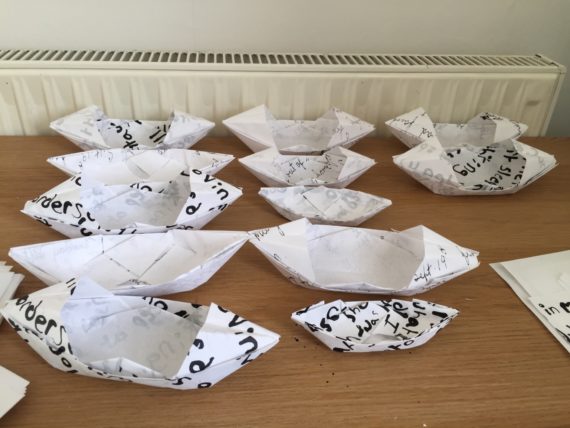 Origami birds I posted to strangers around Leeds and Bath. 2011

So a quick introduction to me as an artist. I was always making things when I was a child, I was always sewing dolls clothes and stuff. I liked art at school I think basically because it was the only subject where being dyslexic didn’t get in the way.

When I was 17 I found a book about Tracey Emin in my college library at Calderdale College and decided I wanted to make proper art. I didn’t make any progress with that lofty ambition until mid-way through my Creative Arts degree at Bath Spa University when I had the revelation that it isn’t enough to go all Sophie Calle and bother unsuspecting members of the public. Proper art has to be about things. That’s when a tutor advised me to find some rigorous theory to ‘Hang my work off’ and I discovered Situationism and Object theory, ideas that still underpin my work now.

For the Emergence Bursary, I will be working on a new participatory project Seaworthy Vessel. I first had the idea for this project In 2015. I passed a scrapyard on the train, from the window I could see a line of large anchors and started thinking about the ships they came from, declared unseaworthy and scrapped. I was interested in the concept of seaworthiness, the idea that for ships a clear distinction could be drawn. Seaworthy/ unseaworthy, a ship/ a collection of parts in a scrap yard. What if we applied this logic to people? I thought of my Great-Grandfather sent home from the Merchant Navy in 1944, His hands were so mangled after an accident they had to tuck his train ticket into the folds of his bandages. Was he unseaworthy? I thought of myself and the damage Multiple Sclerosis is doing to my brain. Am I unseaworthy?

I was due to start exploring these questions in my project Seaworthy Vessel in 2016 when a string of MS relapses effecting my hands and sight meant I couldn’t work for nearly three years. So I’m exploring these ideas now, with the added question of what it means to be able to use our hands?

The Emergence bursary will mean the project can be much more ambitious, I’ll have the opportunity to take a research trip to Norway, reversing the journey my Great-Grandfather made when he fled Norway at the outbreak of WWII.

It also means that I can make new work that experiments with print and ceramics to document and celebrate the current stability of my hands and reach out to others with injury and disability affecting their hands to get a better understanding of the emotional impact that such injuries have on our lives and how we keep ourselves seaworthy in the aftermath of them.