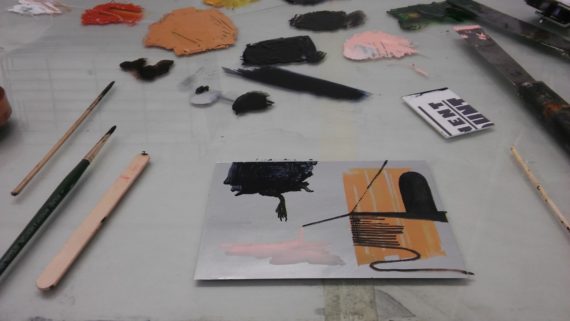 I’ve been unbelievably busy with my many part time jobs/other commitments over the past few weeks and it’s been a real struggle to find time to devote to the blog and to the work itself. I did have a really useful meeting with a Nelson/Colne based artist called Helen Oxley recently and I’ll be blogging about that at another time.

For now though I just want to continue with a bit more insight into the work that I’ve been making in response to the areas. I’ll be posting some more images of the drypoint prints and some photos of the plates soon but I wanted to focus on the mono-prints that I made a few weeks after my trip to Nelson. I’ve only ever worked with trace mono-print in the past which is a method of working that I like but I struggle to push it further to create anything beyond simple lines and marks. For this recent work I’ve been using a metal plate, painting directly onto the surface using the inks in a painterly way. I’ve been diluting the oil-based inks slightly with turps and using rollers, brushes, scraps of card and various other tools to apply the ink to the surface. The plate is then put through a press with pre-soaked paper in the same way that an etching or drypoint plate is printed.

Again I’ve been working from the photographs, descriptions and my own memory to create the pieces – they’ve been completely spontaneous; the two locations have only been referenced loosely using colour and shape and I’ve let formed the images and compositions in a way that has felt very fluid. As with the drypoint plates this has been a step away from my usual way of working. Producing imagery in such an immediate and responsive way has been challenging but I’ve enjoyed the immediacy of it. I also noticed that on a day when I was feeling preoccupied with other work and my mind wasn’t as focused as I would have liked I produced work that felt forced and disconnected.

In the past I’ve always worked with quite a strong idea of what the final outcome would look like and even if my mind was wandering it was still possible to produce relevant work. Creating pieces purely from experiences, memories and impressions requires a more intense level of concentration as the link between myself and the work is key to the making process.

The images (photos taken shortly after the prints were made) show the first series of mono-prints that I made. I was happy with 3 out of 4 of the prints – they seemed to follow on well from the drypoint work retaining some of the magic and surrealism but approaching the imagery in a more delicate way. I don’t usually print in colour very often (except for screen print) as I find it difficult to work with colour in a way that doesn’t feel unnatural or unnecessary. I chose a palette inspired by the two towns focusing on more unusual shades of pink and green that I came across in Nelson. The second series of mono-prints works with the same colours but something about them doesn’t quite work. I’ve not had an opportunity to photograph the later prints yet but I’ll aim to upload them next week.