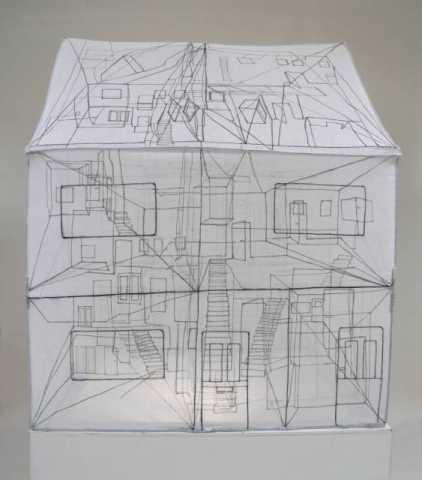 August has flown by. Last day of the month and 12 days to go until our Digswell Open Studios. I've been trying to balance getting things organised and getting my own work done. At times I feel really confident about the piece I've planned, at others the doubt seeps in. I guess nothing is without doubt and that's a good enough reason to try things out. I'm thinking if I was too certain about something then there would hardly be a point in doing it.

I am in the process of building this semi-transparent mini house for me to sit in when I do my drawing; it's like building a shelter for the night, making me seperate from the whole event. Will I feel protected by it or will I feel conscious of being on show? It seems to be playing on these two sides…the anxiety of being the piece and the protection of being seperate from the viewers. It feels scary but I know whatever happens it will be interesting for me.

The organisation aspect has been a fantastic process of learning and such a good way to get closer to the other fellows. It has been frustrating trying to fire everyone up and get final decisions but so enjoyable to be this proactive. I love this feeling that with enough drive you can get things to happen, even if they are only small, it's a start and gets us discussing our issues.

Next week is clean up of the studios and preping them for hanging. I'm actually really looking forward to the mundane task of it- it sounds cheesey but it's something we can all do together and that's a rare event!

It feels a while since I last entered a post on my blog….it's a difficult time of year for getting work done. My boyfriend is a teacher so has the whole of August off, I find myself torn between spending time at the studio and spending time helping him with things at home. I always seem to be busy and he always seems to be doing things on his own. I feel guilty not helping out around the house and then guilty not working!

I felt a little rubbish after getting turned down for the Jerwood and also the Surface Gallery are confusing me with not putting my piece into their Open Exhibition but telling me that they have not rejected my work but would like to put it in a show later in the year. It feels very frustrating- not really knowing. I am just carrying on focusing myself as much as I can. I woke up last night thinking about the C4RD exhibition and what I will do for it. I have had a few ideas but really had doubts about carrying them out, but like a bolt of lightning I made up my mind last night. I have had an idea for a piece that I have wanted to do for a while but not had the right space to do it but thinking about the room I have for this exhibtion I think it is perfect for it. I got really excited and wanted to get up and start plans for it right away. Subsequently, I didn't get back to sleep for hours!

I have a good few days in the studio this week and some set things I need to get done. We have started our plans for our Digswell open studios event for this September. I have the responsiblity of doing the organising of the event so have been working on trying to get fellows involved and fired up. It is also a difficult time of year for trying to organising groups of people because they're all going off on holiday at various different times. I really hope this will be a successful event that will bring us together and produce some interesting work. I hope this will become an annual big event in Digswell's calender.