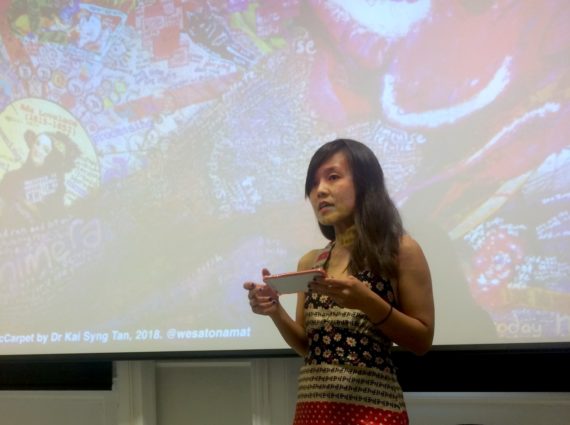 The following is the edited transcript of my opening provocation, exploring recent interpretations of ‘neurodiversity’ in the arts and academia, for the event Too Much or Not Enough: Neurodiversity and Cultural Production. The event consisted of a film screening and discussion with myself, curator Alessandra Cianetti, and literary researcher Dr Sophie Jones, exploring the aesthetics of neurodiversity and the place of invisible disabilities in the cultural industries. It took place on 21 May 2019 at Birkbeck, University of London. The evening began with the provocation, followed by the premiere of my film, Brisk/Risks, which explores risk-taking within and beyond ADHD. This was followed by further responses and provocations by myself, Cianetti and Jones and a discussion. Associated with the event was a 5-day exhibition of my #MagicCarpet in Room 106, which was also artist Vanessa Bell’s studio. Bell also worked in tapestries, and was also the sister of Virginia Woolf, both of the Bloomsbury Set. The exhibition and event were part of Birkbeck Arts Week 2019. The podcast of the evening can be accessed here. This event is funded by a grant from the Birkbeck Wellcome Trust Institutional Strategic Support Fund. Read the transcripts of 2 of the presentations at Brisk/Risks here.

Too Much or Not Enough: Neurodiversity and Cultural Production – now that’s a mouthful! Have we taken on too much for one evening?

It’s been one year since the tapestry of my art-science project #MagicCarpet was launched at the Art Workers Guild, during which we unpacked the term ‘neurodiverse art’ in relation to, and beyond, Attention Deficit Hyperactivity Disorder, and debated the politics of labels. Since then, there seems to have been a mini-explosion of activities tagged ‘neurodiversity’ in the arts and academia. But, or hence, the term remains unstable, contested and controversial. It popped up in a grant proposal to the Arts and Humanities Research Council that I was asked to review a few weeks ago, which explores dyscalculia through cinema. This sort of work builds on that of Nicola Shaughnessy at Kent University who’s researched autism through theatre since at least 2011. She is leading a project with autistic girls, which coincides with work by neuroscientist Professor Francesca Happé at King’s on how autistic girls have traditionally been mis- or under-diagnosed, and who excel in ‘passing’ as ‘neurotypical’ or ‘normal’. Back in 1999, Franky had asked the scientific and medical communities if autism should be considered as a cognitive style rather than deficit, which was around the same time that the term ‘neurodiversity’ was popularised, led largely by the autistic community. I’ve written about women and ADHD in Disability Arts Online and on women with ADHD who make art on PsychART, and how these efforts complicate existing discourses on the mind and brain, which has hitherto largely focus on deficits or how they affect men. Come June, I will run a one-day workshop at an art college, during which we will co-create a manifesto on neurodiversity within the HEI art schools context. In 3 few weeks’ time, I’ll be addressing CEOs at a conference entitled Neurodiversity at Work at King’s. The online journal Arts Professional is inviting articles on neurodiversity for its October issue. Last October, ADHD activist Michelle Beckett proposed in a conference in Edinburgh that, just as diversity is observed and practised in the workplace today, soon, it should be illegal not to include neurodiversity in the workplace. This echoes the words of autism expert Simon Baron-Cohen who argues, that, just like biodiversity, neurodiversity is ‘a next step in a more respectful way of thinking about our planet and our communities’. There’s also been work at Queen Mary led by Lois Weaver and Daniel Oliver, including around dyspraxia, and at Exeter, around autism, and diagnoses by Ginny Russell who’s a filmmaker-cum-medic-cum researcher. 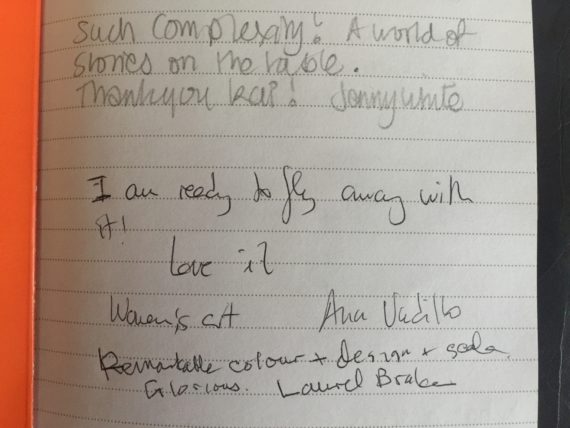 Caption for top image: Kai opening event. Photograph by Alessandra Cianetti. Caption for this image: some of the feedback for the evening.

Yet, diagnosis is such a can of worms. I was at Hamja Ahsan’s talk at the Pump House Gallery which raises questions of membership in different ways. Hamja talks about “Aspergistan”, a state that he’s set up for people who identify as autistic, like himself – although he says that he’s diagnosed with bipolar disorder. Neurodiversity is commonly related to other neurodevelopmental conditions that affect motor function, learning, language and non-verbal communication like dyscalculia, ADHD, dyslexia and of course autism and Aspergers. These are also often related to other conditions, including bipolar. Then, there’s mis- or under-diagnosis (which the NICE guidelines has stated affects women and girls when it comes to ADHD), and not having access to diagnosis altogether. For artist Aidan Moseby neurodiversity encapsulates ‘mental health problems’ at large. This Thursday evening, I’ll visit Hart Club at Waterloo which ‘champions neurodiversity in the arts’. There will be a new show — on dementia, a neurodegenerative condition. This makes me recall a conversation I had with a colleague Ben Platts Mills a director at Headway East London, who argues that ‘neurodiversity’ should include people with brain injury.

Sure, these various claims and takes of neurodiversity help to, and here I borrow the words of philosopher Mohammed Rashed in relation to mad activism, ‘widen our repertoire’ and ‘enrich’ the current ‘impoverished’ discourse about how we think about ourselves and others. But regarding neurodiversity, Mohammed also challenges the assumption that autism, ADHD and so on can be traced back to a shared ‘neurology’. Indeed, we talk about how when you meet one autistic person you meet one, you haven’t met the others, every autistic person is different. Yet, as Mohammed asks, why do we assume that all ‘normals’ share one neurotype? We dislike being misunderstood but as we identify as neurodivergent, do we demonise and caricaturise ‘neurotypicals’? Many may reject the medical model, sometimes without fully engaging with the concepts and practices, so is there the risk of being reductive, and hence alienating these very systems which are powerful? And is ’neurodiversity’ a cover for the tired trope of the artist as mad, suffering genius? Yes, so-called ‘mainstream’ society have traditionally use this as an instrument to other and marginalise the arts. But do artists claim labels to self-mythologise and romanticise as an attempt to appear different, radical? And, as blind theatre practitioner Amelia Cavallo states in a recent conference in Zurich, people like us gathered in such space talking about disability or, in our case, neurodiversity, are privileged. Indeed, we’re articulate – even if it means reading my script from my iPhone – with a certain level of education. But as Amelia argues, there are many people who refuse to identify as disabled, including artist Ryan Gander. Those who can chose labels are, by and large, a privileged bunch, with agency and voice, and the ability choose our battles. Isn’t choosing to ignore the fact that many people actively choose to resist the label arrogant? In the case of neurodiversity, what about those who are non-verbal, or have intellectual disability for instance? And are there hierarchies of ‘normality’ within the ‘community’? And are we so tribal within certain sectors of the sector, that, while we borrow languages and tactics of queer activism and civil rights movements, we make no qualms about duplicating the very same oppressive systems that we are criticising on those without ‘membership’, and even ‘members’ who’re not pure enough – such as someone with a presentation of both autism and ADHD, which are highly co-morbid – or not angry enough, because we dare to reach out to colleagues in the medical sector, or are flirting too much with the ‘mainstream’? And my key question, always, in such gatherings are, yes we are here as people who are concerned, and as so-called allies or accomplices, which are problematic terms in themselves, but so what? What next? How to reach out to those who aren’t in the room, for whom diversity let alone neuro-diversity doesn’t matter? How to not just moan, but translate to something positive, or into action?

So, back to the question: is all this too much? Well, maybe we aren’t doing enough – we aren’t asking enough or better questions, we haven’t done enough? 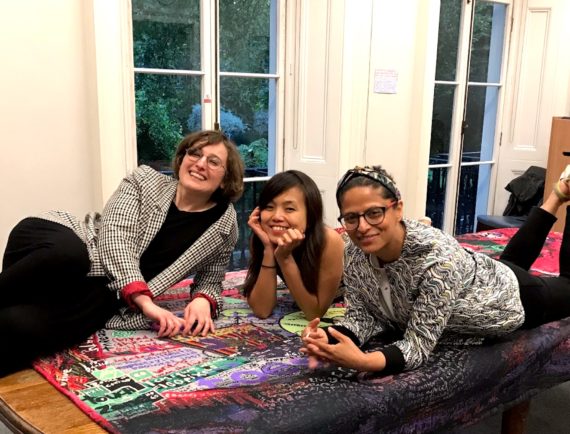 *See images and feedback of premiere of the film at Birkbeck, University of London, on 21 May 2019 here. The film premiere was part of Too Much/Not Enough: Neurodiversity and Cultural Production, of the Birkbeck Arts Festival, The evening featured 2 new provocations by Kai, including one on the contested term ‘neurodiversity’, alongside medical humanities scholar Dr Sophie A Jones and curator Alessandra Cianetti. *Listen to the podcast of the entire evening here of the evening. *Access edited transcripts of the evening’s discussions here (on ‘neurodiversity’) and here (on neurodiversity and leadership).

* Find out more about #MagicCarpet here

* The Conversation article by Tan and Asherson: On the salience of high quality art in mental health

The open mic and film are part of ‘We Sat On A Mat and Had a Chat and Made Maps! #MagicCarpet (from 2017), which is an art-science exploration which gathers diverse and divergent bodies (and bodies of knowledge) to explore difference and (neuro)diversity, with ADHD and how it relates to mind wandering as a starting point. #MagicCarpet was a 2017 Unlimited commission funded by Arts Council England, with additional support by King’s College London. Thus far, #MagicCarpet has reached more than 9000 people, including through Arts in Mind and Unlimited Festivals. Venues include Science Museum, Southbank Centre, South London Gallery, Art Workers’ Guild and the Peter Scott Gallery (Lancaster). Publications include an article that was read 2000 times within 2 days of publication in The Conversation (10.6 million readers) and a top 2018 editorial on neurodiversity and women in Disability Arts Online. 100% of the feedback for an event stated that the work has challenged their understanding of how the arts and science can collide and create new insights. AHRC reviewers have described a proposal of next phase of the work as ‘exciting and innovative’; ‘already leading the way’ and ‘with an impressive track record’. #MagicCarpet was awarded a prize for ‘Cultural Change’ by the National Coordinating Centre for Public Engagement (2018). Dr Kai Syng Tan FRSA SFHEA was the project’s lead and the first artist-in-residence at the Social, Genetic & Developmental Psychiatry Centre. An artist, consultant, curator and academic, Tan is best known for gathering diverse and divergent bodies and bodies of knowledge to engineer spaces of ‘productive antagonisms’ (Latham & Tan 2016) across disciplinary, geopolitical and cultural boundaries, in what she calls an interdisciplinary ‘ill-disciplined’ approach (Tan & Asherson 2018). Marked by an ‘eclectic style and cheeky attitude’ (Sydney Morning Herald 2006), ‘radical interdisciplinarity’ (Alan Latham 2016) and ‘positive atmosphere’ (Guardian 2014), she is recognised as ‘absolutely central’ for the emerging ‘Running Studies’, and was Visual & Communications Director for the £4m Opening and Closing Ceremonies of 8th ASEAN Para Games (2015).