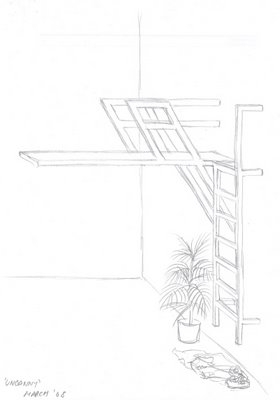 My grandfather told a story from his time in national service, which he spent working at RAF Ringstead Radar Station, in Dorset, circa.1950. This is what my mother and I can remember of it:

At Ringstead there was a radar bunker built into a hillock in the middle of a large wooded area. It was manned 24 hours a day by one person at a time working in shifts. The over-night shift was notoriously unpleasant due to the isolation from the rest of the camp and the darkness of the forest.

One night the man on night-duty, who had been working the shift for some months, made a radio-call to the camp. He asked to be collected at once. The job had got to him, and the following day he left the station altogether, taken away for psychiatric treatment.
Others were reluctant to take his place, and it came as a surprise that the only volunteer was a young man who was known for being what my grandad referred to as "effeminate". This man went on to work the night shift for a long time without complaint.
When asked how he endured the nights spent alone in the bunker buried in the woods, he replied, "The only thing that irritates me is that the slightest breeze causes the door to rattle against its frame. So I leave it unlocked and slightly open."

Unfortunately, his apparent fearlessness did not last. Eventually he "cracked", as his predecessor had, and was likewise relieved of the post. From then on a new policy was put in place: that the night shift would always be worked by two people at a time.
These photographs are of the RAF Ringstead Radar Station after its closure in 1970. From grandad's description, I'd guess that this bunker is the one from his story. The surrounding area seems to have been partially deforested, and the bunker itself is stripped. However, with a little imagination it is easy to envisage how unnerving a night alone there could be.

In his 1899 novel Heart of Darkness, Joseph Conrad's narrator describes a first impression of an infamous ivory trader named Kurtz:

I could not hear a sound, but through my glasses I saw the thin arm extended commandingly, the lower jaw moving, the eyes of that apparition shining darkly far in its bony head that nodded with grotesque jerks. Kurtz – Kurtz – that means 'short' in German – don't it? Well, the name was as true as everything else in his life – and death. He looked at least seven feet long. His covering had fallen off, and his body emerged from it pitiful and appalling as from a winding-sheet. I could see the cage of his ribs all astir, the bones of his arm waving. It was as though an animated image of death carved out of old ivory had been shaking its hand with menaces at a motionless crowd of men made of dark and glittering bronze. I saw him open his mouth wide – it gave him a weirdly voracious aspect, as though he had wanted to swallow all the air, all the earth, all the men before him.p.74
Kurtz's gaping mouth recalls H. G. Wells' description of a momentary impression Mrs Hall has of the title character in The Invisible Man:
… for a second it seemed to her that the man she looked at had an enormous mouth wide open, – a vast and incredible mouth that swallowed the whole of the lower portion of his face. It was the sensation of a moment: the white-bound head, the monstrous goggle eyes, and this huge yawn below it.p.11
Similarly, Edvard Munch's painting The Scream (1893) shows a contorted face with a gaping mouth. 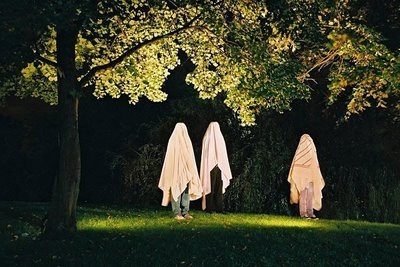 There is something uncanny about how these killers are so much alike, living composites, how easily they blend in. The serial killer, as one prosecutor of these cases expressed it, is "abnormally normal": "just like you or me."
p.10

An embodiment of an uncanny spatial relation, the stranger's "strangeness means that he, who is also far, is actually near". … The stranger, if not (quite) yet the statistical person, begins to make visible the uncanny stranger-intimacy that defines the serial killer: the "deliberate stranger" or "the stranger beside me".
p.42

There is, in the experience of serial killing, a compulsive location of the scene of the crime in such homes away from home – hotel and motel spaces as murdering places. This is one indication of the radical redefinition of "the homelike" on the American scene: not exactly "no place like home," but rather only places "like" home. If stranger-killing is premised on a fundamental typicality, then the making of what came to be called, at the turn of the century, American "hotel-civilization" is premised on the mass replication of ideal-typical domestic spaces. It is premised, that is, on the uncanniness (unhomelikeness) of the domestic as such (an uncanniness perhaps inseperable from the psychic shocks of the machine culture of mass-reproducibility). Hence the repeated location of American serial violence in hotel and motel hells: the murder motel in Robert Bloch's novel Psycho, for example, or the even more lethal tourist hotel in his subsequent novel, American Gothic.
pp.47-8

What I mean to consider here are the relays progressively articulated between bodies and places such that the home, or, more exactly, the homelike, emerges again and again as the scene of the crime.
p.201

There is no doubt always something outmoded about the domestic and its constructed nostalgias – what might be called its uncanniness, if the notion of "the uncanny" (the unhomelike) itself had not by now become an all too homey way of naming that belatedness, its ambiguous causalities and periodizations (in effect, a way of endorsing a sort of better living through ambiguity). It is the vexed status of the homelike itself that I mean to define here. More exactly, it is the way in which the public spectacle or exhibition of "the private" in machine culture – museums or replicas of home as tourist site, for instance – seems to have become inseperable from the exhibition of bodily violence or atrocity that I mean to examine. These haunted homelike places – hotel and motel hells, for example – set in high relief the "gothic" rapport between persons and spaces, the distribution of degrees of aliveness across constructed spaces, the assimilation of the animate to the inanimate and mechanic.
p.202 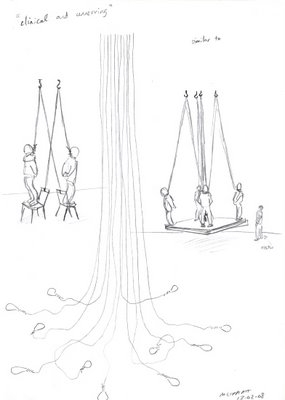