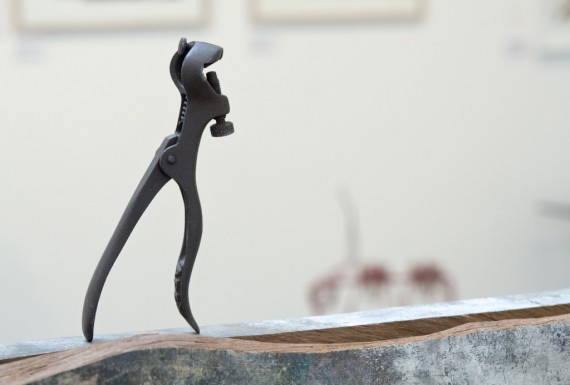 Or do objects find us?

I am interested in making visible what I sense to be present behind the surface appearance of things, by going past the obvious. Influenced by my upbringing on a farm in Germany I strongly respond to form, texture and colour of organic material like wood, soil, rust, bones. A notion of ‘nobleness’ in disused tools and decaying matter retain my attention:  a rag of yellow nylon jumper, washed up by the sea and encrusted with clusters of algae, bears an uncanny resemblance to giraffe hair. An uprooted tree sits on a reversed metal bucket, eaten away by a rusty hole. These manmade objects in their liminal state of being reclaimed by nature serve as a metaphor to the cycle of life. Human intervention disturbs the environment, but in the end nature has always the last word. The supremacy of the human is an illusion.

Finding objects is subject to chance, the chance of an object being in the right place at the right time.  But it is not as random as it seems, only those items with a colour, a texture, a form and an emotional content that struck a cord with our preferences and conception of a theme retain our attention. In my case these are predominantly objects with an archaic feel, in between two states of their lifecycle.  They have an inherent presence and noble nature under a weathered surface.