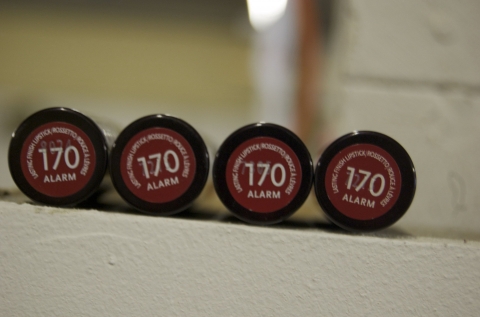 When i lived in Bristol they used to say you could get anything on the Gloucester Road, and in my experience that was pretty much true. It used to be a similar story for Shields Road when i lived in Newcastle as a kid. I wondered if it still held true. I went to explore and returned disappointed but for a tin of cheap paint from wilko's. I guess Chilli Road or Heaton Park Road are the places these days. Progress ay! So this paint is heinous.

Therefore this is a work in progress destined never to be finished 2007 It is just so shiny it's unbelivable and so unbreathable too. But i will persevere with it cos now it has my curiosity. I want to discover it's properties and potential. Watch this space. 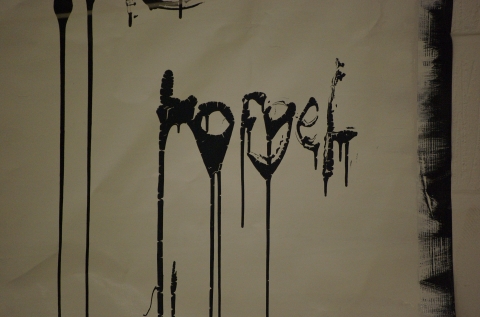 FITTING IT ALL IN

It's that old thing. You either have the time or the money, rarely both. When this residency was first mooted the year was looking like a desert road – long and empty. Now, in the midst of it things are leaping out, rearing up out of nowhere. For a start you can wipe 2 weeks out the calendar for xmas and new year. A couple of weeks after that i was in Cromarty helping my partner installing some work and the opening of her exhibition. Then i have just returned from a mercy mission to Spain. In amongst all this I am trying to complete the compilation of the book i took on when the waygood got delayed. So where does this fit in. Well, thankfully now it moves closer to the top of the list. Whilst not at the studio it is pretty much on my mind. Which is good. However it is also frustrating. Just before spain i had intended to go into the studio. However, I was unbelievably snowed in again. The second time this winter. How often does that happen in these days of global warming. Oh yeah and in amongst it all you have all the mundane life maintenance stuff to do. Sounding like a whinging pom its time to stop.

I tend to make things on the fly or in a spontaneous manner. I don't dwell on what it is i am going to make – it just comes into my head and i make it. I am not a perfectionist. I make do with what i have to hand or what is easily available. Hopefully that is cheaply too. So i have this friend who is looking to off load a whole load of parquet. It's already been an artwork. So i quite like that recycling thing. That lack of preciousness. And Parquet. Well, there's a word. It just sounds pretentious, up itself – at the end of the day it's just a floor.

This parquet is blocks. Old recycled blocks – even prior to being an artwork by Susan T Grant – not tongue and groove. I like the blocks. They are solid. Small and solid. Coloured and discoloured by time. Like a little piece of history. Each block with its' own memory. It's own story. And now it has one more. At the moment i only have one small box. It's not just a straight forward transaction. I get to buy a share in half of it. Get access to it all and then have to store the half which isn't mine. It also fits into the accumulation of stuff, clutter – that ocd-esque satisfaction thing going on. Lots of bits that get put together to make a bigger bit.

Battling tentatively through the snow with a boot load of exciting booty to mess around with when i got to the studio i was a bit ahead of myself. Unlike those days when you wake up slightly late and things get gradually later as you go through day – a bit like one of those motorway tail backs which is just a rippling echo of someone breaking too hard further on up the road. I won't rant on about how no matter how much advance warning we have of snow it always surprises the UK and brings it to a standstill.

Meeting and talking with Tony is intense(unfortunately Jo couldn't make it today). Like the mentoring sessions should be longer but after an hour or so it's like having gorged yourself on a smorgasbord of fine food and wine. A heady cocktail indeed. It has brought into focus things I have been unaware of in my practice which is great. For instance in narrative confessionals does the narrative have to be factually based, honest or is invention and faction ok? Does it matter?

Tony keeps referencing other artists I have either neither heard of or seen their work. Not coming from a traditional art degree background but one which has encompassed organic farming, dysfunctional adolescents and therapy i have to hold my hand up to a certain degree of ignorance of such matters. However i have been told that sooner or later you need to check out other peoples work in a more broad and in depth manner. I better renew my library card for 2008. A fear of doing this is how do you stop yourself from being influenced or incorporating others work into yours. Collective unconcious versus deliberate plagiarism. But how else do you push yourself/knowledge and improve without being challenged?
On a more mundane level i am slowly cluttering up my studio with stuff. Starting with the table and spilling out from there 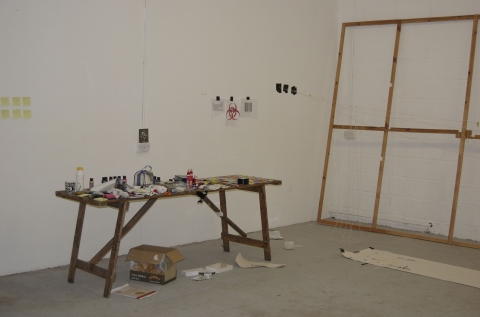 EXPERIMENTS AND RESEARCH OR JUST MESSING AROUND?

So I finally started working. I've strung several lengths of twine from one side of the studio to the other. I had to mark them with luminous electrical tape after an accident was narrowly averted. Handy household hint number 37. I'm not exactly sure why i have done this but it seemed like a good idea at the time. Maybe it cordons off some space, or fills some up without actually having to have much in it. Maybe it just lulls me into the sense that i have done something, i am making progress, i am on my way…wherever that is. I say twine because that's what it is. I like the word and i like the quality, not that string doesn't have its own place and virtues, but twine…… it's not just the word, it's the way it smells, the way it sounds and feels. Nothing can beat a really good quality twine.

I have also been doing varying experiments with PVA. This ranges from the high quality to the cheap and cheerful nursery school stuff. These experiments have involved just making lots of mess and testing how it falls, sticks, peels off, that kind of thing. This needs a lot more work or just ditching. On the other hand similar efforts with acrylic inks and paints have been much more encouraging.I seem to be slowly succeeding in filling the space. I went round the local hardware cathedral and woolies …..my first alphabet…tapes and adhesives of every variety…buying what seemed inspirational stuff.I guess the over-riding thing has just been playing. I don't think we play enough as adults and its over all too soon for kids these days. I mean that non directive imaginative free play thing. So yeah, research or messing around. Where do you draw the line and what's the difference?