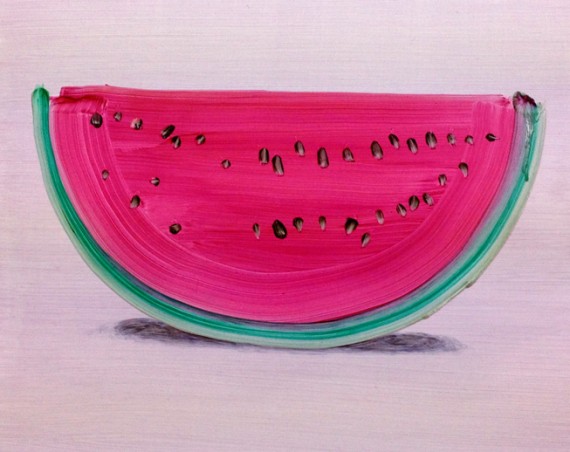 Chew Crew looks at activities of food preparation and consumption, culinary processes, expression through cooking, and the energy and entropy of food. Urara Tsuchiya and Joseph Walsh are collaborating on a new film work, part of which was filmed at Transition earlier in the year during a short residency in the gallery. This work features a sensual chef and a musical group, with handmade costumes referencing various foods and kitchen items. Diana Roig will show large scale immersive abstract paintings, andMimei Thompson a new series of still life paintings and fabric works. The whole show is also a collaboration between this group of artists, to include various food related events.

Diana Roig’s work is influenced by natural growth, biological processes and fractals. She has a fascination with evolution, new species, origins, transformations and perception. She invites the viewer to have his or her own unique experience with her work, distilled from their own reference points, and fed by the organic forms suggested in her large paintings.  Roig studied at the Willem de Kooning Academie, and has exhibited her work in Rotterdam, Amsterdam, Den Haag, Buenos Aires, Argentina and at the Woodmill, London. She lives and works in Rotterdam, Netherlands.

Joseph Walsh works with video, photography and performance. He sees his moving image work as a series of ‘video portraits’, and is interested in this format as a means to construct a character by proxy, through external objects and ideas. Walsh studied at Goldsmiths College, Staedelschule, Frankfurt and attended the LUX Artist Associate Programme 2011/12. He lives and works in London. Recent project and performances have been at The  Showroom, Chisenhale Gallery and Beaconsfield Gallery.

Mimei Thompson’s paintings often look at the idea of a longing for an  experience of nature, and how this is culturally framed. Her paintings are both representational and process-based, with translucent luminous paint marks. She studied at Glasgow School of Art and the Royal College of Art London, and has work in the Arts Council collection. She has a solo exhibition at Trade Gallery, Nottingham, later this year, and lives and works in London.

Urara Tsuchiya works mainly with performance, video, and live events. She often incorporates soft sculptures, costumes, masks, and home cooking.  These function as props to set up an alternate environment for out of the ordinay behaviours to take place. Urara studied at Goldsmiths College and Glasgow School of Art. She has recently showed at Embassy