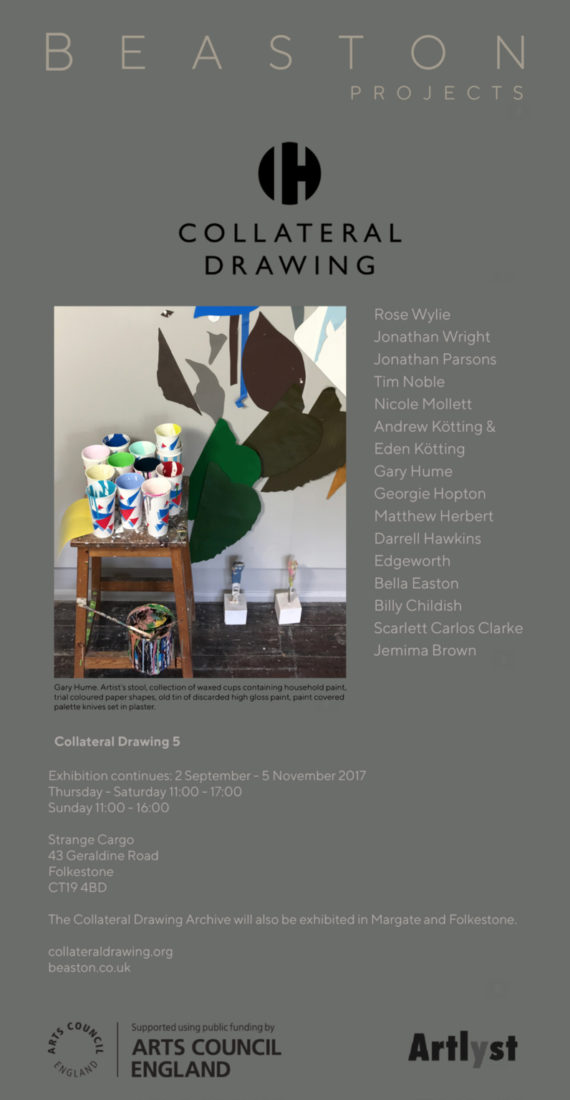 Collateral Drawing is a curatorial project by B E A S T O N projects, exploring the relationship between finished artworks and the accumulative elements that feed into or result from their making. The next exhibition and publication in the series will show sixteen artists in Kent.

There’s more to an artwork than its finished state, but exhibitions concentrate on that, along perhaps with preparatory studies which act as preliminary versions of that state. Yet there may be any number of by-products from the making of an artwork, and that is what Collateral Drawing explores by showing the ‘collateral’ alongside the finished work. This fifth iteration to be shown at Strange Cargo in Folkestone features artists who have a connection with Kent.

The collateral may take such forms as the stage setting, models or constructions which are created in order to facilitate the work itself; the redefinition of past work as collateral to a future work in which it is repurposed; various means of recycling aspects of a practice; or the marks which result serendipitously, but with a more than accidental logic, from the production itself.

Every artist has their own unique working method that habitually causes repetitive marks to be inflicted onto or alter their working surroundings. Whether dripped, scratched, taped, erased, smeared, hammered or edited: all are repetitive and typically unguarded instances of the process of drawing through any medium.

Everything in the studio, within the paintings and around them, is a physical manifestation of the paintings’ thoughts and ideas. Biggs and Collings Collateral Drawing 4, UCS, East Anglia 2016.

The results hold a fascination of their own: not just as a documentation of the artist’s creative process and an indicator of the thinking which led to the finished work, but as an insight into the relationship between what is subconscious and conscious in the artist’s practice.

The Collateral Drawing Series was launched at Plymouth College of Art in February 2014. Since then it has had further editions in Athens, Berlin and East Anglia.

In conjunction to the exhibition held at Strange Cargo, Collateral Drawing will be reveal for the first time its archive of over forty donated by-products from the artists that have shown in the project so far. This will comprise of two Kent based exhibitions at The Margate Washhouse and The Brewery Tap UCA Project Space in Folkestone.