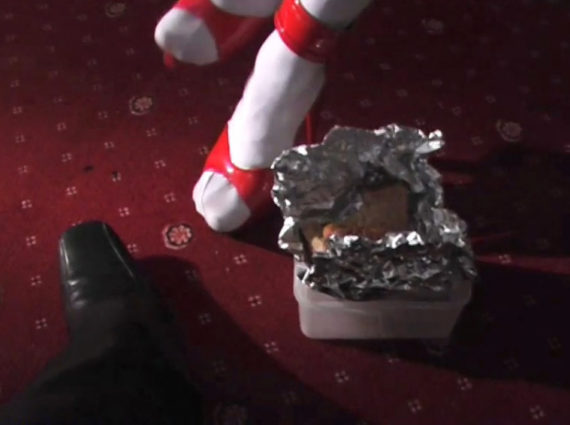 A packed lunch, banana and all, ready for the working day. But this is no ordinary 9-5, as despite the patterned carpet throwing us off the scent, these sandwiches are brought in to be consumed in a ‘strip club’. The artist, Quilla Constance (or QC, an exoticized, punk-feminist persona) was known as Jennifer Allen at the time of making this work – though it’s quite possibly Quilla Constance who we see performing here.

With this moving image work she created a scene of purposeful discomfort laced with humour, with the camera moving in sweeps from the floor to close-ups of the ‘client’ for the dance, glancing uneasily whilst sipping his water. Quite literally putting on a performance to expose the performative nature of identity and power relations, the objective is “to locate and assert new and empowered modes of being for marginalised identities such as BAME, female and working-class subjects.”[1] Humour and discomfort are thus employed defiantly, to disrupt the patriarchal framework, tease out contingencies, and to centre marginalized narratives.

This feeling of discomfort visible in the male client and perhaps evoked in the viewing experience of this work is heightened by the technical choices made when filming it. Shot on a Mini DV, it is a Lo-fi way of filming, even for the time (2006), when there would have been more advanced technology readily available. Talking about this intentional disregard for industry standard technical film language Constance states this “doesn’t allow the viewer to escape and take refuge within familiar cinematic tropes or formulaic humour as employed in mainstream entertainment. In this respect it’s also important to acknowledge that satire is already co-opted into popular culture, which often reduces the critical efficacy of this language – however, it’s the job of the artist to retain critical efficacy.”[2] The choice for this handheld, candid cam feel is both to afford greater intimacy and antagonize the usual air of ‘glamour’ and titillation that surrounds strip club settings and their soft-form translation into popular culture. Late 90s and early 00s hip-hop music videos come to mind, where similar dance styles were depicted alongside slick production values.

Instead, Constance is paying tribute to a completely different subculture; punk. She describes elements of her practice as “picking up where punk left off”, considering that punk is a counterculture from the late 70s which got almost instantaneously co-opted into dominant popular culture. Drawing on punk’s DIY aesthetic and spirit of protest, what is posited or activated is a contemporary interpretation, a ‘new punk’ that has some activist strategy at its core. Quilla Constance views the origins of punk as seeking to create confusion, for instance, by mixing things up or disseminating messages across different platforms, akin to her very interdisciplinary practice where painting, performance and costume can take on new meanings altogether. Hers is an intentional adoption of these activist strategies that resist any singular meaning, instead welcoming interpretations that challenge the norms or rewrite the narratives. One way of doing this is to purposefully remove things from their usual context – in this case a stripper in this carpeted context rather than in a slick strip club, or sound-tracking the film with Mariah Carey’s sentimental ballad My All (1997), rather than a ‘sexier’ song – so the meaning can’t be as easily pinned down into a neat account. Embracing multiple meanings can thus be read as an activation that gives agency to her biracial identity and the working female in general, by subverting stigmatized (gender) roles.

Working Lunch oscillates between sense and nonsense, uneasy tensions and overt sexuality, showing an astute understanding of the systems of power behind these definitions.[3] Constance’s willingness to take risks and disrupt convention is aimed at spurring on societal progression – one that does not oppress and marginalize people. In doing so she takes on the role of the trickster; a character who uses cunning and knowledge to defy ‘normal’ behaviour. Starting from a biracial, female identity position that is crucially lacking representation within the hegemonic, patriarchal status quo means the trickster is the perfect figure and strategy for navigation, since Constance has less to lose in this position. QC the trickster can ‘plot’ to mobilise new understandings of subjectivity and unfix meanings.[4]

QUILLA CONSTANCE (b.1980, Birmingham) works across live and recorded performances, costumes, lectures, paintings and video installations. Quilla Constance, QC or #QC is the “post-punk, neo-glam, gender-questioning performance persona” of Jennifer Allen, adopted in 2009. This work was made under the moniker Jennifer Allen, but informed QC and can clearly be traced in that genealogy.

Working Lunch is a slightly earlier edit of what became Strip Show (2006), which is the version held in the David Roberts Collection. Upon the artist’s request, Working Lunch is the version being screened, as “it has more grit!” Both versions were shot and edited whilst Quilla Constance (then known as Jennifer Allen) was completing her Master of Fine Arts at Goldsmiths, University of London. 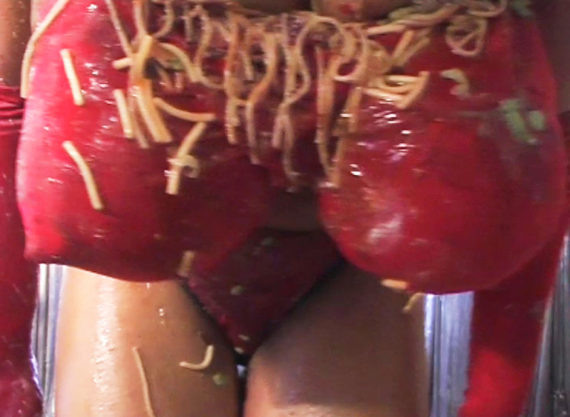 [2] Quilla Constance, in discussion with author.