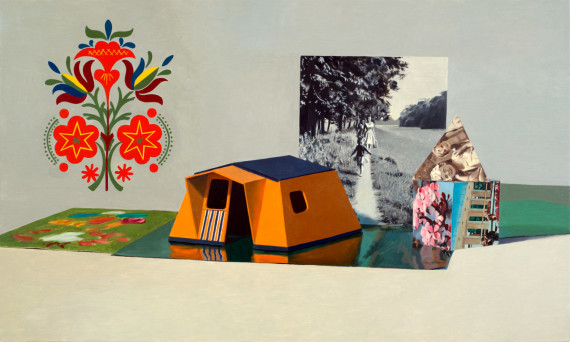 The call for entries last Autumn generated an overwhelming response and after a challenging selection process for the judging panel we can reveal a superb line up of work by thirty two artists (a third of whom are currently based in Wales). The selection panel included Clare Woods, a leading international artist who had a large solo show at Oriel Davies in 2014 and subsequent Welsh tour (2015-2016); Nick Thornton, Head of Fine Art at Amgueddfa Cymru – National Museum Wales, Cardiff; Dr Rebecca Daniels, Art Historical Researcher, Catalogue Raisonné of Francis Bacon and Alex Boyd Jones, Curator at Oriel Davies.

The exhibiting artists include:

These artists present new and recent work that reflects the multiplicity of painting; whether abstract or figurative, representational or imagined. The scale, material and presentation varies enormously for example some works are created through mechanical intervention over a period of time while others require the viewer to move physically around them.

As we might imagine the work can be seen to be a reflection of our time, whether referring to the past and our understanding of it, the virtual worlds we operate in more frequently, the human psyche or our ongoing relationship with our physical environment. As viewers in a show like this we see dialogues, influences, the political and the social as well as a reflection of ourselves.

Once again in 2016, there is a chance for visitors to the exhibition to vote for their favourite work in the People’s Choice Prize. £250 which will be awarded to the artist whose work receives the most votes which has kindly been sponsored by Cambrian Trains Ltd.