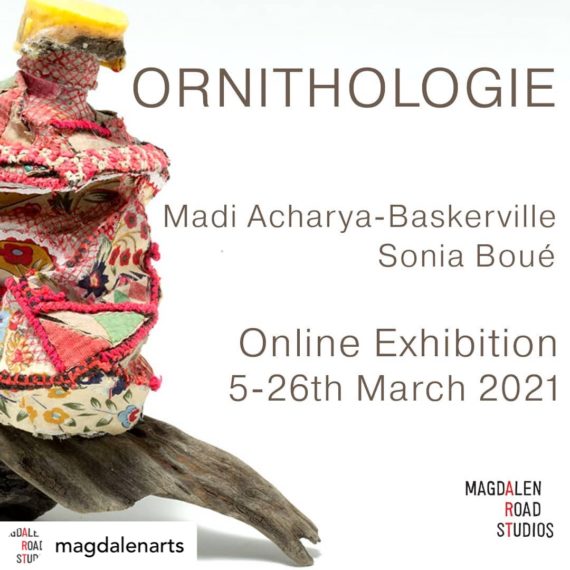 ORNITHOLOGIE is an online collaborative exhibition by Sonia Boué and Madi Acharya-Baskerville who share adjacent studios spaces at Magdalen Road Studios, Oxford. Both artists use objects and share a reference to nature in their work. Sonia Boué has recently made photocollages with intricate structure of branches as a backdrop. Sometimes she appears intertwined with them as if she is part of their structure but also separate from them. For Madi Acharya-Baskerville, branch-like structures form part of her sculptural works, which reference the human body and sometimes take on an animal-like presence. Textiles such as embroidered fabrics handed down from her family are also incorporated into these works creating a more personal connection.

Sonia Boué has created a series of analogue and digital photo-collages entitled ‘Wings of Desire’ in response to the global pandemic. A performative photography practice, developed under lockdown, in which Boué has donned a series of beak-like false noses have drawn her to the ornithological and pricked a desire for wings. In three of the resulting collages Boué identifies with an extinct passenger pigeon and fuses illustrations of an imagined resurrected bird with photographic self portraits. A further trio of collages in monochrome also draw on the wisdom of her ancestors, who endured enforced migration and exile.

Madi Acharya-Baskerville’s mixed media sculpture series, ‘Unnatural selection, survival of the plastic’ was inspired by a haunting image of a dissected sea gull’s stomach. This showed all the items that the sea gull had swallowed during its lifetime, including numerous pieces of plastic. Taking this image a step further, she is creating a new species where the birds have swallowed so much plastic that part of their anatomy is composed of plastic, so they come to have plastic beaks, wings, feet and so on. Embroidered patterns and painted sections are also incorporated into some of the sculptures which reference colourful patterns of some birds. The combination of textiles from South Asia and draw parallels between the migratory activity of birds and the migration of humans.

‘ORNITHOLOGIE’ is a unique exhibition where the artists’ collaboration can be viewed as ‘pairings’ a series of encounters where the works appear to be in direct conversation with each other in unexpected and enquiring ways.