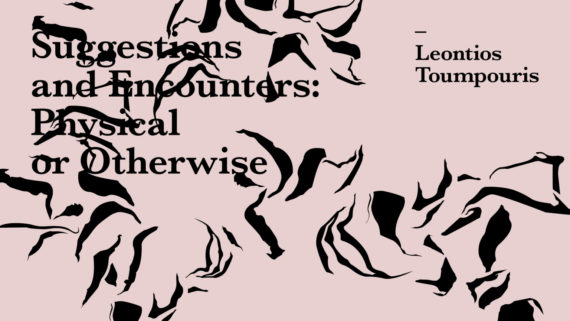 Opportunity exists within ambiguity, the unknown and the not-yet-trodden. A number of possibilities are presented to us within Leontios Toumpouris’ exhibition, all of which are, or at least seem to be, within our control. If we were to stretch our hand out a little further and attempt to grasp.

Last year it emerged that a large number of British water companies were employing the use of dowsing rods, “divining sticks” that rely on unconscious muscle reflexes in the same way a Ouija board does. The success-rate of these tools is next to non-existent, despite them having been used since the 16th century. They have long been consigned to the same realm as alchemy, a non-science long looked on as a quirk of the small minds of the past. And yet in 2017 there were dozens of reports of company workers, pacing areas of land, waiting for the two metal rods in their hands to vibrate when coming to proximity with underground bodies of water. It is a complex image to understand, a person in high-vis using a tool universally disregarded for its reliance on archaic notions of magic, just last year, and one that both presents a collapse of past and present in that unifying space of possibility.

Though perhaps not an image that induces confidence in those scientifically minded, it is one that provokes us to consider a living fiction, a desire within ourselves to construct a physical language, a performance that speaks of stories living out-with our own.

Within Toumpouris’ exhibition there are symbols, nods and voices that present to us the opportunity to situate ourselves within a fictional past, a space in which to dig and explore symbols, language and material that has made its way there through the agency of human’s, subjects or the materials themselves. The possibility of a future exists in tools awaiting our interaction, apparatuses that are both remnants of the past and building blocks of the future. The space is past, future and fluctuating – an opportunity for knowledge to transfer between author, matter and viewer.

The components of this show are entangled, dependent on each-other for not just existence but usage as well. These are objects to both imagine ourselves within, but also to stretch out our hands a little further and attempt to grasp.

We are invited not just to experience, but to dictate, inform, configure.

The publication will be available to purchase on the preview day, throughout the duration of the show and during the publication launch.