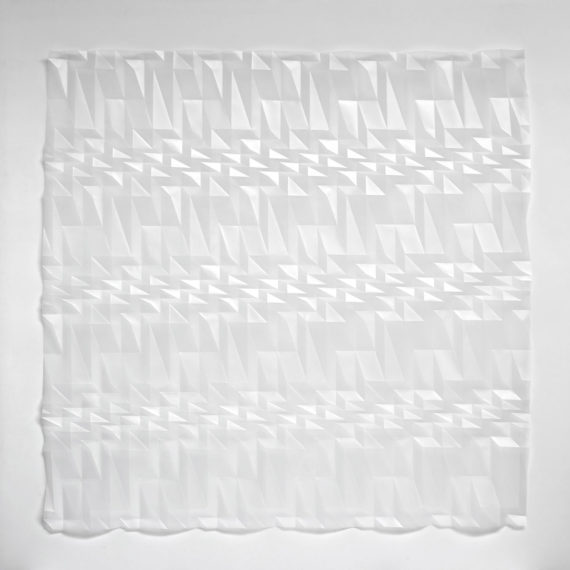 The underlying compositions of Tony Blackmore’s work are based on grids where lines distort and intersect with variable frequencies. Similar to constructive interference in wave formations or the displacement of lines in moiré patterns, Tony experiments with size, angle, and spacing until a tertiary pattern is formed from which to create an undulating folded surface.

With regimented precision, lines are mapped from the original drawing and scored onto drafting film before each is hand-folded and the surface nurtured into its final relief. The resulting form often brings an element of surprise or unexpected drama. The drafting film used has a matt translucent surface that is able to both absorb and reflect light. Casting light over the landscape of each work create illusions of geometric shapes that shift in movement and depth which is heightened further with the movement of the viewer.

In addition to Tony’s interests in geometry and physics, the work in Folded Geometries reflects an energy generated from a daily Buddhist practice and time spent in Japan where he observed origami in the making and studied the lighting, proportion and spaces of Japan’s traditional architecture.

OPENING NIGHT PREVIEW DRINKS THURSDAY 7 SEPT 7-9PM Everyone’s welcome including children and dogs as our events tend to spill out onto the street to better enjoy the art at this street-facing gallery space.

For information and how to get to the gallery visit wvwg.co.uk
Tony Blackmore’s own website is here at tonyblackmore.co.uk