Why Be Exotic in Private? - a-n The Artists Information Company 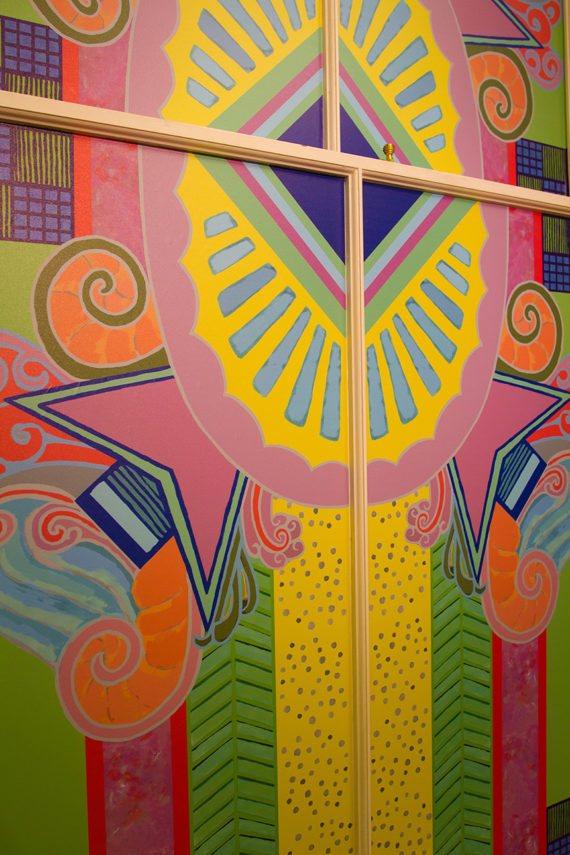 “If you create the stage setting and it is grand, everyone who enters will play their part.” Morris Lapidus

“There is a tension between reality and artifice, the mundane and the fanciful, the everyday and the escape.” Jenny Steele and David Jarratt, 2018

‘Why Be Exotic In Private? is a solo installation by artist Jenny Steele, which is the result of her research into South Beach Miami’s 1930’s ‘Seaside Moderne’ architecture which was inspired by the long sweeping streamlined curves and details of ocean liners and the International Modernist style.  In addition to recording the formal and decorative elements of the buildings, Steele explored the social history of the largest area of coastal art deco architecture built internationally. The installation was Steele’s first solo exhibition in London at The Foundry Gallery, Chelsea from December 2018 – March 2019, and is touring to Rogue Project Space, Manchester in June 2019.

For ‘Why Be Exotic in Private?’ Steele has created a series of screen printed, shaped panels that suggest temporary theatre sets. Walls of the gallery are painted in colours from the South Beach palette, which was created by artist Leonard Horowitz in the 1980’s to revive the dilapidated architecture of Miami South Beach; to create a more tropical and desirable environment. The reverse of each panel is painted in a single palette colour and reveal a restaged collection of research, drawings, photography, postcards and historical memorabilia from the buildings which have influenced the designs on the front. This ‘behind’ gives an insight into the way in which Steele works, a process which normally remains hidden from final public works.

Manufactured from swampland with imported trees and foliage, parrots and flamingos (none of which were indigenous to the area), the tropical paradise of Miami Beach in the 1930’s was seen as the ultimate holiday destination, designed as another-worldly place; becoming a playground that would provide a backdrop for people to perform relaxation at the seaside. During the 1970’s and 80’s, following years of neglect and facing demolition, many of the art deco buildings were restored by the newly formed Miami Design Preservation League. Their voluntary efforts included repair, repainting in tropical colours and persistent international promotion of this distinct area of architectural heritage. This successful regeneration has made Miami Beach one of the most recognised and desirable seaside cities internationally, demonstrating the transformative power of colour, design and pattern.

Drawing on the architectural ideas of American architect Morris Lapidus, who designed playful and glamorous hotels in Miami and internationally, Steele has created a ‘mis-en-scene’ – a total art work where she has set the stage. Morris declared architecture as a movie set where the guest took on the role of an actor, and interiors created a space to act out of the ordinary from their everyday lives.  Artificial foliage leads us through the environment to the work ‘Inside the Tropical Garden’, a printed response to the ‘The Tropical Garden’, an unattainable exotic garden Steele researched that was kept behind glass in Miami’s Lincoln Road Mall during the 1930’s.