Anne Bean (born 1950 in Zambia, lives and works in London) has been a distinctive and original presence in live and performance art for some fifty years, both performing solo all over the world and as a founding member of the Bow Gamelan Ensemble with Richard Wilson and Paul Burwell. In a recently launched monograph on her work, Self Etc., the writer Dominic Johnson writes: “The art of Anne Bean makes strange our sense of time, memory, language, the body, and identity, particularly through solo and collaborative performances along a vital continuum between art and life.”

Anne Bean and Paul Burwell’s 1983 performance work Her voice is pollen as she was placed featured alongside the article ‘Expanding The Media Show’, Artists Newsletter, March 1984, p 9.

The article explained that Sheffield City Polytechnic’s annual two-week Expanded Media Show festival of experimental art, which focused on video, film, performance, photography and sound, had for its 1984 edition ‘made its first move to get out of the college and attract a wider audience in the city itself’.

What did the 1980s mean to you both personally and professionally?
I remember the beginning of the 1980s vividly. Near the end of 1979 all the artists living and working in Butlers Wharf, including Paul Burwell and myself, were thrown out after a late night fire in the building. We decided to travel abroad and in late February 1980 Paul Burwell and I arrived back in Dover after travelling around Europe performing in various venues. Confronted with the fact that we were homeless, we lived temporarily in the London Musicians Collective, freezing cold and with no running water or toilet. The often bleak scruffiness and ever present corrugated-iron fencing of London seemed to stimulate us and feed endless possibilities for both working and living. We continued to work together as PULp Music, a sound-based group using improvisation, often with voice and drums, as well as doing numerous other collaborative and solo works.

In 1983 Paul Burwell and I formed Bow Gamelan Ensemble, with the sculptor Richard Wilson. When the three of us had all lived in Butler’s Wharf we explored the Thames and other waterways mostly by boat, sharing our excitement of the visual dynamics and unexpected sounds encountered, often on vast scales. This stimulated the ideas that became embedded in the DNA of the Bow Gamelan Ensemble. At the end of the 1980s, I was pregnant with my son Ezra and he became my collaborator for a time. 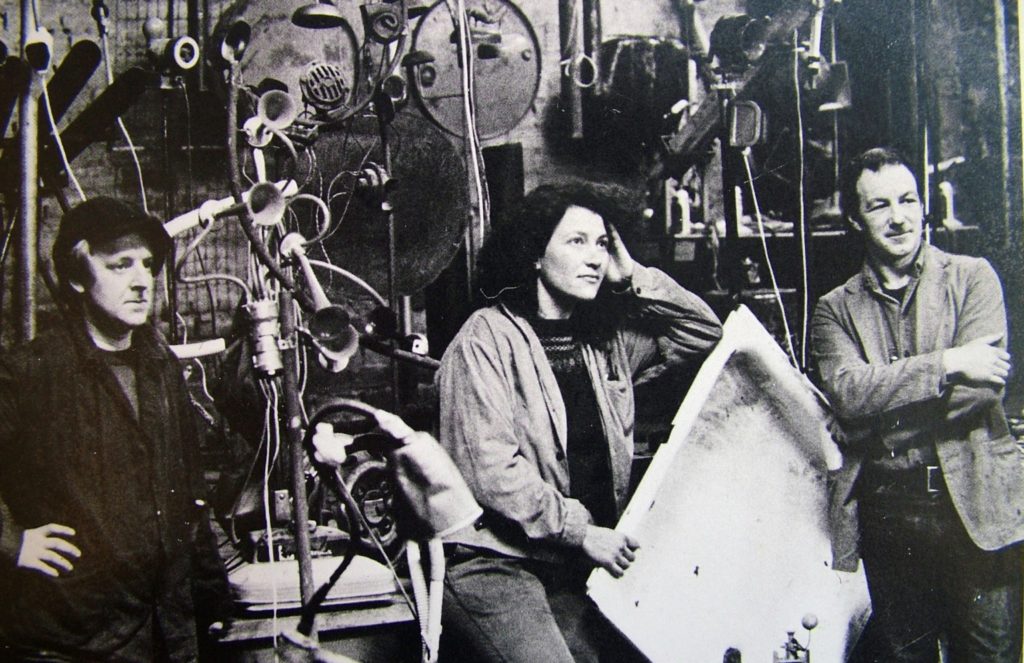 Were there any key moments or turning points in this period?
I don’t think in terms of turning points or key moments, but two resonant living/working situations jump to mind. The first, in 1988, was being invited to live in a village in the rainforests of Tabasco province, Mexico, accessible only by boat, where an astonishing woman had engaged an entire village in epic theatrical productions. The second was travelling to Warsaw in the early 1980s to perform with the Dutch artist Franklin Aalders. We were then invited to spend an entire summer, deep in the Polish countryside, with a group of people, mostly artist/activists, who were living off grid, in every sense.

How did your work develop during this time?
More in terms of further possibilities and insights, rather than development. Technologically, I experimented with various video techniques, including thermal imaging and chroma-key, also known as blue screen, with the video artist Dov Eylath. We produced several works such as Blue for You, 1981. Being part of ‘William Burroughs: The Final Academy’ at the Ritzy, Brixton in 1982, including Burroughs, Psychic TV, John Giorno and Brion Gysin, where PULp’s saga ‘Adventures in the House of Memory’ was realised, gave freedom to a ‘beat consciousness,’ an acceleration of words. 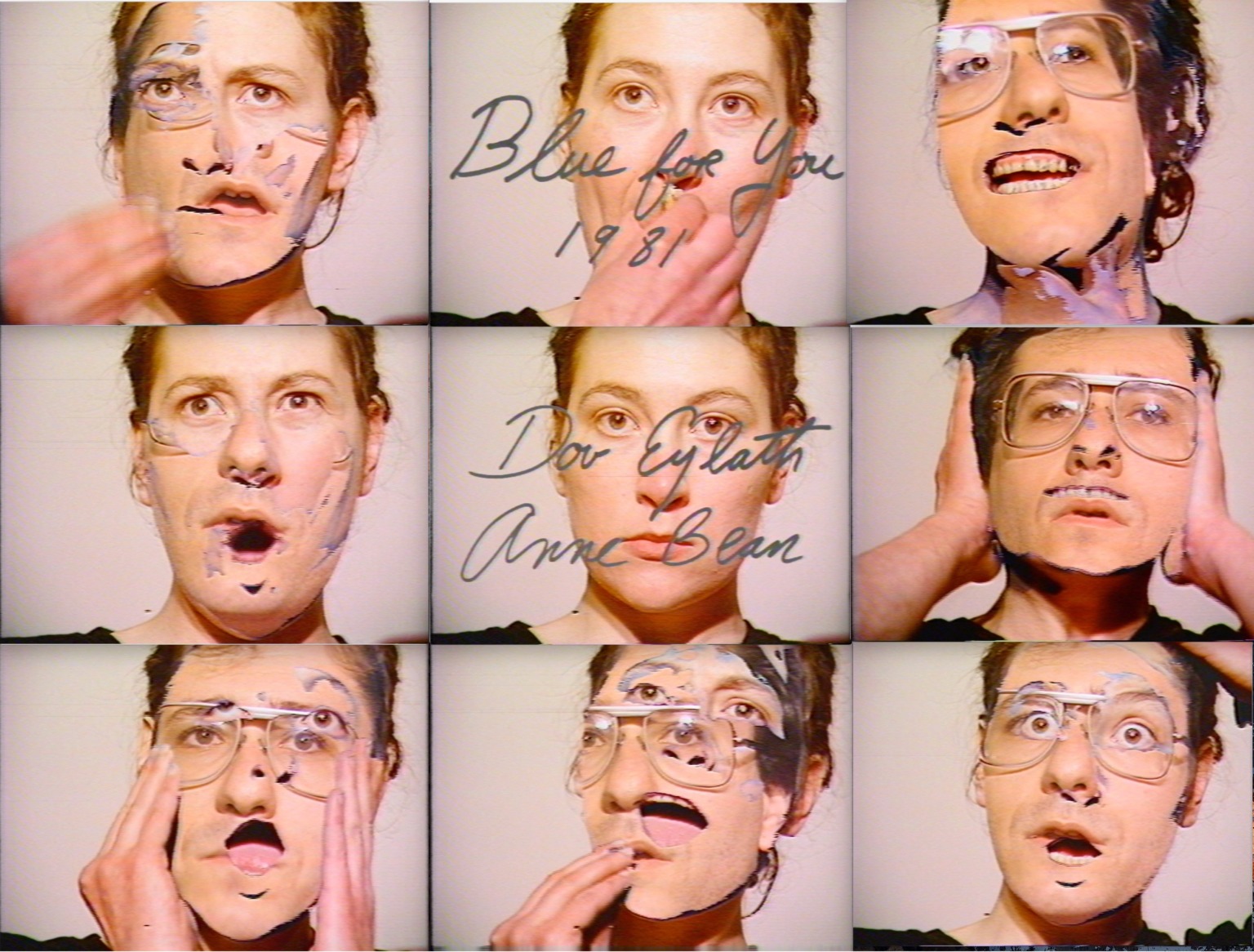 In 1983, in 2 p’s and a bean, Paul McCarthy, Paul Burwell and myself treated a derelict house as a sculptural edifice to transform, beginning in separate rooms ‘within’ our own performances. We then broke through walls and ceilings into each other’s spaces, pushing performance as a dynamic material process. Pain (tings) (1987) explored and questioned what the performance space actually is. I invited Rob La Frenais, editor and critic for Performance magazine to review my performance as it was happening, typing and reading out his notes alongside me, so that the review and performance were embedded in each other and he became both a critic and a part of what he was critiquing.

Late Afternoon of the Last Day, a three day collaborative installation/performance with the artist/poet Carlyle Reedy at Kettle’s Yard, 1988, came out of conversations about the accumulation of materials, and why we imbue some things with talismanic qualities.

Meanwhile, Bow Gamelan Ensemble, (1983-1990) expanded to fill entire islands on the Thames, harbours in Japan, cathedrals in Edinburgh and collaborations with street vendors, their calls and their cart bells and whistles, in Mexico City.

There is an image in a-n of your 1983 performance Her voice is pollen as she was placed. Can you talk about this performance and its significance for you?
As a child, bored in a synagogue, singing incomprehensible Hebrew prayers, I had a realisation that all our mouths and tongues were moving in unison and the shapes inside our mouths were all similar. I also became aware that these mouth patterns matched millions of ancestral mouths for thousands of years, as they sung these prayers. These thoughts seemed to have a magical quality. I did many performances later on where I placed objects or materials in my mouth to transform my voice whilst I spoke or sung a text that related to the imposed ‘shape’ in my mouth. In this work, honey poured into my mouth from a funnel, distorting and strangling my voice, as I improvised words inspired by a Navajo song about pollen whilst Paul Burwell drummed. 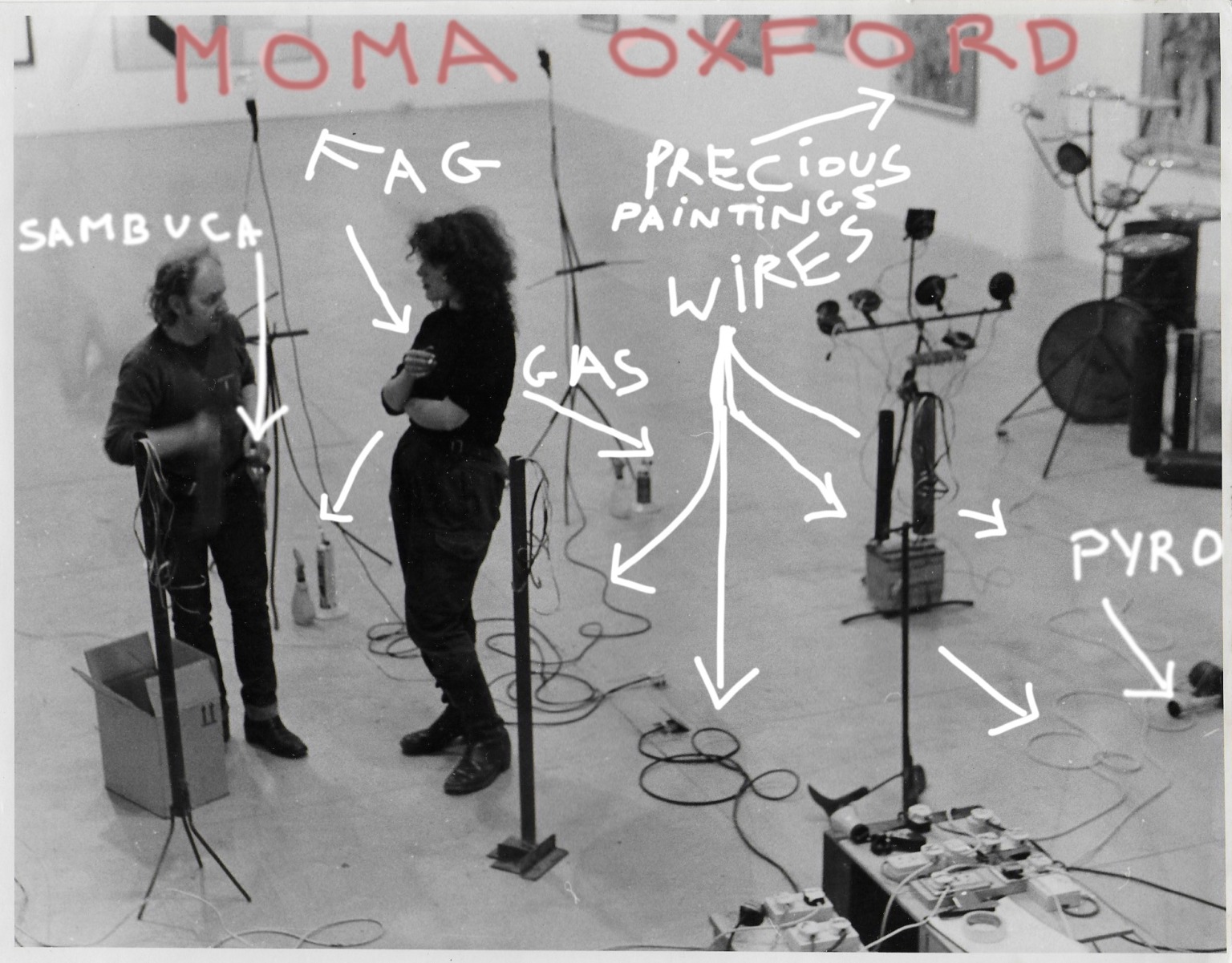 How did you become aware of a-n and what role did it play in your development and career?
a-n seemed to be around for as long as I can remember as a grassroots, practical open forum, inclusive to artists who might not have been represented in other contexts and providing information about art across the board. From a purely pragmatic point of view it was invaluable in offering Public Liability Insurance for numerous events with which I was involved, particularly with Paul Burwell as PULp Music (often with the pyrotechnician Stephen Cripps) and Bow Gamelan Ensemble. Attempting to get insurance down any other avenue would have been a nightmarish venture given the numerous volatile materials with which we worked. This gave us a basis of professionality in institutional interfaces. I often wondered how an insurance claim might have played out.

How significant was a-n in raising the pressing issues of the times?
Looking back, I realise how a-n was the internet of the time, a web of exchanged information across all categories of artists, presciently giving voice to much of the activism and consciousness of issues today, from gender and mental health, to art education and artists’ livelihoods.

40 years on, what are the key changes for artists starting out now?
For me, a key change from my generation of artists is the drive now to articulate and ‘interpret’ ahead of the work, often led by art institutional requirements. It seems to be a blunting tool, that is a stricture not a structure, hiding pathways towards a more mysterious and deeper consciousness that art can gift.

What advice would you give your younger self?
My younger self gives me advice, which I think is the right way around.