Hi All Wondering if anyone can help me here, my apologies if this isn’t the right forum to post in but… I’ve a potential commission starting soon in which I’ll be working in an unfamiliar way. I’ve been contacted by […]

Following the second workshop in the programme, led by frieze deputy editor Amy Sherlock, three of the participants chose to write about British-Nigerian painter Joy Labinjo’s exhibition at Baltic, ‘Our histories cling to us’, her first major solo show. Already […] 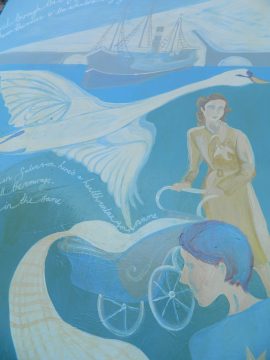 Fragmented reflections, consumed by our collective consciousness, soaring out of the individual to perceive art, nature and self from afar.

I first met Jenny at the Sheffield Artist Book Fair last autumn and was immediately smitten by her and her books. Despite their diverse subjects, they share a common aesthetic: many have a concertina as the basic element, lending flexibility […]

This is a door that’s inviting you to go inside, it’s almost bending itself to show you more of the light gleaming from under it. A little door with a lot of energy :0) door#19 (mixed media on canvas board) […]