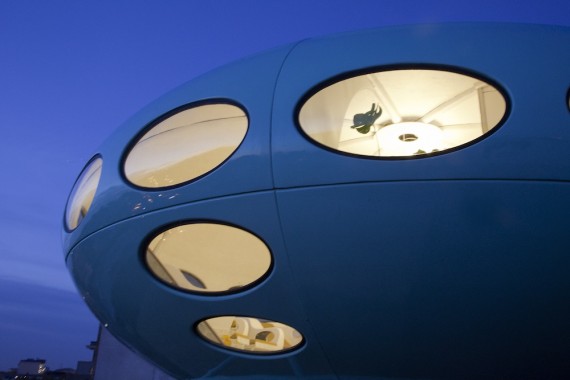 What kind of year has 2014 been for you?
Long, fruitful, exhausting, exhilarating, sad, happy. Like any year, just turned up to 11 in this particular case.

What has changed for the better and what, if anything, has changed for the worse?
In a worldly sense, the ongoing descent of humankind lurching myopically towards its own demise is predictably depressing and difficult to know how or where to respond to. Professionally, successfully finishing the first stage restoration of the Futuro house I inadvertently acquired the previous year, and beginning to learn how to inhabit it at Matt’s Gallery, seemed like a small miracle. Personally, I got married which has made me a very happy man and better for it.

What do you wish hadn’t happened this year?
That my Dad hadn’t unexpectedly been diagnosed with cancer and passed away six weeks later in the midst of install. He never got to see the finished Futuro. And that I’d bought the right bolts at the outset to put the house together with, and therefore not had to spend hundreds of pounds on washers.

What do you wish had happened this year, but didn’t?
That I’d actually got to see any other artist’s work in person other than that which was in Revolver II [the Matt’s Gallery show that also featured the Futuro house].

What would you characterise as your major achievement this year and why?
Putting a Futuro house on the 4th storey roof of Matt’s Gallery, London and getting married, because I hadn’t done either before and wasn’t sure either would ever happen, even at points this year.

Is there anything you’d like to have done this year but haven’t?
Found the next destination for the Futuro house and my Centre for Remote Possibilities. Answers or suggestions on a postcard please…