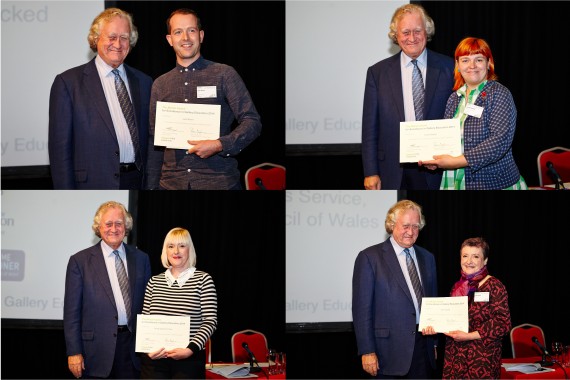 Four gallery educators have been recognised for their ‘dedication or innovation to make the visual arts more accessible’ with the presentation of this year’s Marsh Awards for Excellence in Gallery Education at this week’s 2014 engage International Conference.

The awards, which were launched in 2011, invite colleagues working in galleries and visual arts organisations to nominate deserving co-workers. Nominations are then judged by a panel of experts from the sector and representatives from the Marsh Christian Trust, which funds the awards.

Jack Brown is an artist and freelance artist educator at Saatchi Gallery, London and director for learning at Hackney WickED Arts Festival. He was nominated by Saatchi Gallery’s head of education Francesca Wilson, who highlighted his dedication, careful planning and ability to strike the right tone by making artwork and projects relevant to all, as well as by colleagues at Hackney WickED. In both nominations, Brown was commended for his energy, ideas, and for going ‘above and beyond the remit of his role is in supporting and nurturing artists’.

Vicky Chapter, participation and learning manager at Aspex Visual Arts Trust, Portsmouth, was nominated for her enthusiasm and dedication to her role, the gallery and its work. Having joined Aspex as a volunteer in 2009, Chapter now leads its education programme, developing projects such as Aspex Greenspace, a community garden and art space to increase engagement with the local community, and Bridging the Solent, a sub-regional partnership project to enable young offenders and hard to reach young people to engage with contemporary art. In her nomination, Joanne Bushnell, director of Aspex Visual Arts Trust, described Chapter as “an exceptional arts manager, with admirable professionalism and unwavering positivity”.

Ronda Gowland-Pryde is head of education at John Hansard Gallery, Southampton. She was nominated for her innovative work there with young offenders. Since 2007, she has been an advocate for the Arts Award scheme, which inspires young people to grow their arts and leadership talents, and more recently embarked on part-time doctoral research to evidence the value of contemporary art learning in restorative work with young people. In 2012 she established a weekly Arts Award programme with the newly formed Southampton Youth Offending Service, which led to the service achieving Arts Council England Artsmark status. In his nomination, Stephen Foster, director of John Hansard Gallery, commended Gowland-Pryde’s innovative practice which has been instrumental in the gallery becoming an Arts Award Centre.

Artist and tutor Sian Hughes was nominated for her work on Denbighshire County Council’s (DCC) Lost in Art project. Based at Ruthin Craft Centre, the project is designed for people with dementia aged 50 and older, along with their family members and carers. It aims to explore the role of the visual arts in addressing issues that can affect people with the condition, including social isolation, confidence, communication and quality of life and wellbeing. In nominating Hughes, DCC’s arts development officer Sian Fitzgerald said her contribution had made “a positive and outstanding difference to the lives of a group of people in Wales”.

Congratulating the winners, Jane Sillis, director of engage, said: “This is the fourth year that engage has celebrated the achievements of colleagues through the Marsh Awards for Excellence in Gallery Education. Nominations for the award are truly impressive and demonstrate the dedication and creativity of those in the sector and their work with really diverse audiences.”