A Q&A with... Amber Akaunu - a-n The Artists Information Company 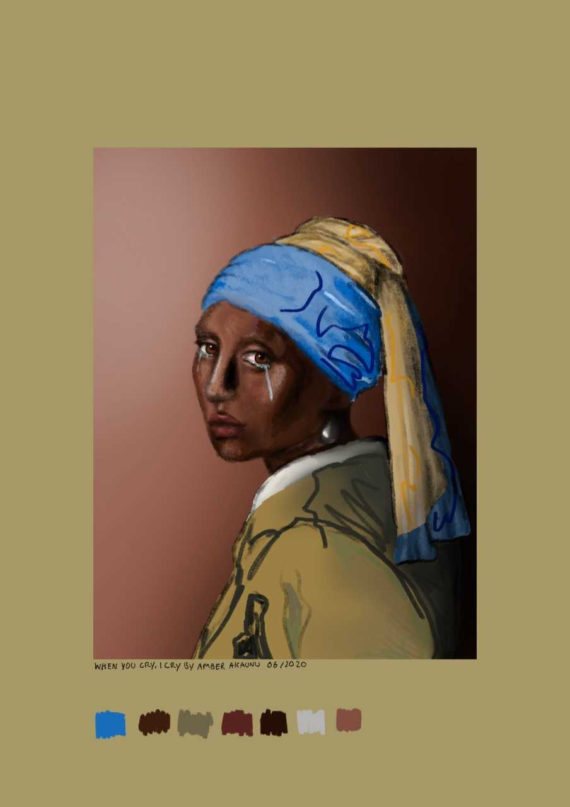 Heavily focused on context and the research and development stage, she recently directed a short film titled Afro Hair Rituals that explores the idea that the process of doing afro hair is a sacred and intimate ritual which has been passed down for generations. Created with New Creatives North, the film was recently broadcast on BBC Four.

In 2018 in the final year of university, Amber co-founded ROOT-ed Zine, a quarterly magazine and social platform that promotes, inspires and supports creatives of colour from the North West of England.

Earlier this month Akaunu produced a digital painting When You Cry, I Cry in support of Black Lives Matter. Here she discusses the impact of the work and what needs to change in terms of support for Black and minority ethnic artists across the arts. She also explains how lockdown has impacted her practice and her plans for the next 12 months. 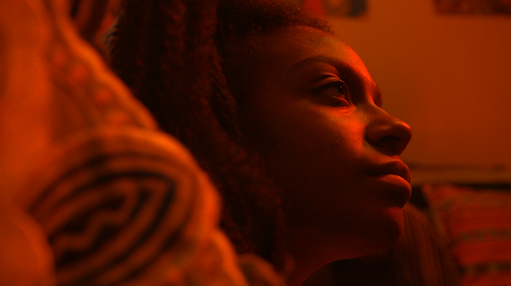 What inspired you to create ‘When You Cry, I Cry’?
I created the work on my iPad whilst listening to one of my favourite songs, which is ‘Footprints’ by T.O.K. It features the lyrics ‘when you cry, I cry’. I was thinking about everything that was going on in terms of racism and police brutality, but also myself as an artist. I feel like the art world hasn’t responded in a way that I would like it to.

There was a lot of performative compassion and I found this really upsetting. If people really cared then they would support Black artists, but I wasn’t getting that. I was dealing with all of those emotions, and I felt the best way was through art.

I usually make films and photography, but recently with lockdown I have been producing illustration and digital works. Due to accessibility, it’s been the outlet for me.

Once I’d created the work I just posted it on Instagram but then started receiving messages asking if it would be a print, so I decided to do it. With everything that’s been happening I felt the need to donate the money. The painting is so relevant to now, and so donating money from the sales made total sense.

For 24 hours all the money that was made through the print went to the Black Lives Matter movement in the UK. It raised £288 which was really nice.

The print was showcased on Instagram. How important has this platform been to the response over the last few weeks?
I think a lot of artists use Instagram because it is so visual, but in a wider sense it has become really important in terms of visualising what is happening right now in the wider world. My followers have massively increased, and it has become a place where people can express their politics and social issues. People seem to be receiving this well. 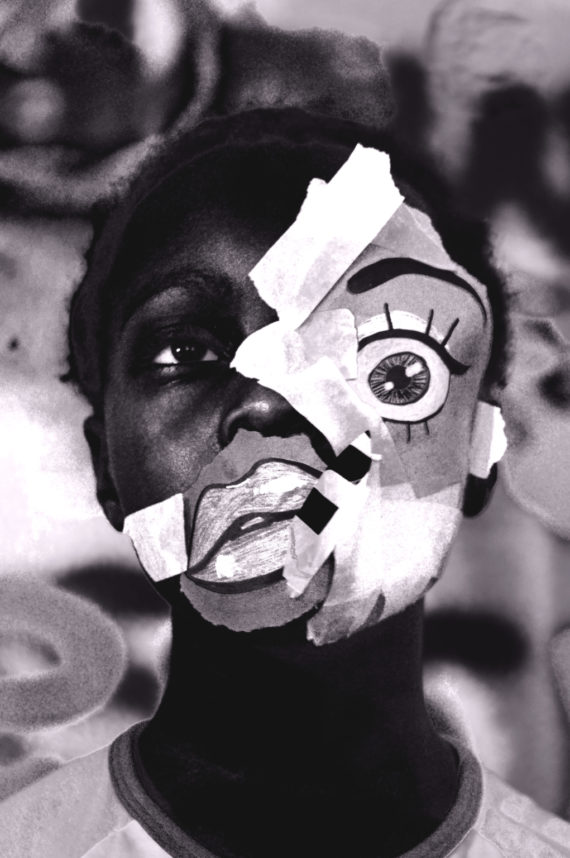 What can art institutions do to improve their engagement with members of Black and minority ethnic communities?
There are some organisations that are better than others. For example, ROOT-ed Zine has just partnered with Tate, FACT and the International Slavery Museum. Some of my favourite places to work are here in Liverpool, with organisations like the Bluecoat who have a great history of supporting Black artists.

We have also partnered with Creative Debut to start the Black Artists Grant. We have had around 300 emails since that was released, from Black artists who are extremely talented but who desperately need support. Crucially, it has made us realise how easy it actually is to set up a grant, so it’s quite shocking when bigger institutions with bigger resources and more time to do it don’t.

I feel like it’s a choice for them. This was the first time we were in a position to give out money, and maybe it’s not always so simple, but we did feel ‘if we can do it why can’t they?’. It’s just two of us that run ROOT-ed Zine and I feel like we do more to help the Black community than some institutions that have teams and actual budgets! 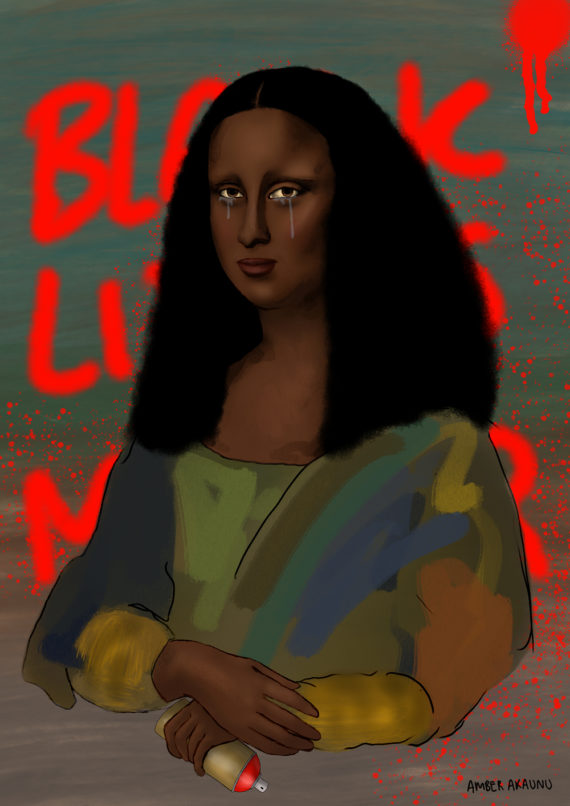 How can it be addressed?
There are so many ways to address this, particularly in a place like Liverpool which has such a dark history. It is a city that was built on its Black community yet a lot of us struggle to find consistent work here. I graduated from university two years ago and I’ve not yet found a job here. I instead found work in London and was very lucky in that I could still be based in the North West.

It’s a case of dedicating grants, internships and training programmes for Black people because, and this might sound unfair to some people, but a lot of us have to move down south just to find a consistent income. This is our home and where we want to stay.

We need Black people at all different levels: not just Black cleaners but directors and curators.

On a personal level, I want Liverpool’s Black art scene to grow and thrive and moving down south does not help it. It would be nice if we had more opportunities here so that we can stay here and add to that community.

When was ROOT-ed set up and how important is it in the current climate?
The zine was set up by myself and Fauziya Johnson, who were both at university together and in our final year. Over the summer I’d seen some footage of the Ku Klux Klan attacking Black people, but it was current. It just really shook me.

So when I went back to uni I made the decision that my art has to address Black issues and racism because it is too important. Fauziya was also looking at these things in her own practice, so we decided to collaborate on a piece of artwork, which turned into ROOT-ed.

We opened up to one another about our struggles as Black artists and felt it was important to create this platform for other artists like us. That was in November 2017, and the first issue came out the following March. It featured Lubaina Himid as the first artist, and I think that helped gain credibility because she had just won the Turner Prize.

She really didn’t have to do it, but it was so nice because it was our first issue and it really helped.

We have now had 10 issues, working with lots of different galleries and artists. We have also run several very successful community events, the most recent being a Tate Exchange takeover in which we curated a programme and exhibition on the topics of movement, hair and Black history.

Interestingly, in the last three weeks we’ve had the biggest growth we have ever seen in sales and donations. In some ways it’s slightly frustrating as we’ve been doing this for years and it does feel like suddenly it’s a trend. But also, it is great to feel that people care and want to educate themselves.

It is important that we have a platform such as this, that also represents the north west, at a time when a lot of discussion regarding racism is very London-centric. 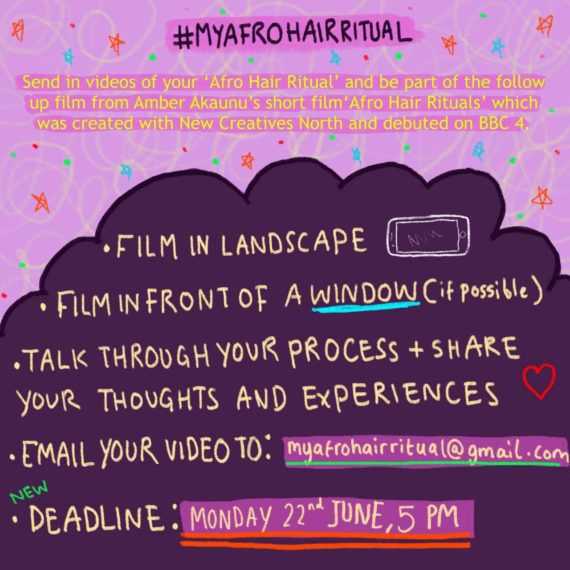 How have your plans for this year been affected by Covid-19 and what projects are you currently working on?
One big thing is I was due to go to Goldsmiths in September to study my MA, and I’m uncertain as to whether that will happen as I don’t really want to do it on a computer as it’s a practical Masters.

In terms of my general practice, the biggest thing that has been postponed is a large project with Turner Contemporary. It was the biggest freelance job I’d ever committed to and I’d already done a lot of planning for it. Hopefully it will still happen at a later date.

I’m also working on a follow up to Afro Hair Rituals and have been asking for submissions via social media. How society views afro hair is deeply linked to racism, colourism, Black history and more. It impacts the way we are perceived and treated. So I want the second instalment of Afro Hair Ritual to be about more than hair, about everything that comes with having this hair and this heritage.

I’ve always worked from home rather than having a studio, but my work is very collaborative, so the main thing is not having access to people, but social media does help address this. I feel like a lot has changed – but not much at the same time.