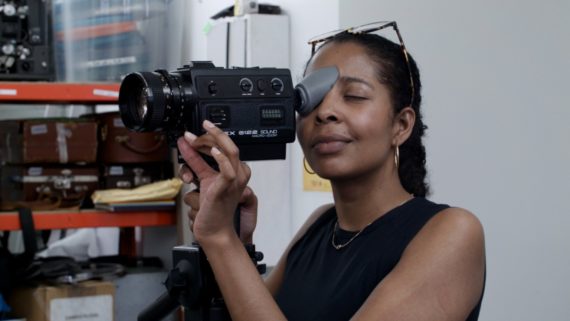 Jennifer Martin is an artist filmmaker and writer based in London. She is also a co-director of the black and POC-led artist worker’s cooperative not/nowhere, which specialises in analogue film.

Her work has been exhibited and screened in the UK and abroad, with recent solo exhibitions and commissions at Primary (Nottingham), Turf Projects (London), and Cypher BILLBOARDS (London). In 2019-2020 she was a recipient of a FLAMIN Fellowship award, enabling initial development of her current film Scratch the belly I bare… Other awards include the 2018 Stuart Croft Foundation Education Award, and she was artist-in-residence at Kingsgate Workshops, London, 2019/20. Earlier this year, Martin was named as one of Film London’s Lodestars 2021, an annual award honouring the bright futures of innovative filmmakers, creatives and craftspeople from across London.

She speaks to Joanna Byrne about her recent and upcoming film projects, her work with not/nowhere, and how she is exploring different funding streams to enable her to realise broader ambitions as her latest film goes into pre-production.

What creative film projects have you been working on recently?

Recently I’ve been thinking about belonging through film: how belonging is viewed and judged, how it manifests, and how it’s manipulated. The framework for that assessment is what shifts for each project. TEETH (2020) looked at belonging through the UK immigration system. When I started writing, The Guardian leaked a letter by Amber Rudd, then Home Secretary to Theresa May. She wanted the public to know that the UK Government ‘has teeth’. That really registered for me as someone who’s lived in the UK as an immigrant since I was 18. I wanted to focus on the specificity of the spousal visa – one that I had been on myself. I wanted to show what happens within this specific assessment, to show that every stratum, every part of the UK immigration system is broken – even for visas that people think are ‘standard’.

It was important for me to go beyond my own experience and find others who had been on the same or similar visas. I thought I would find similarities in how we encountered these systems but actually I found how different those experiences were depending on different privileges: passport privilege, racial privilege, sexual orientation. What I wanted to especially express through the film was the emotional reality of what happens when you’re put through those structures and when you’re made to perform. With the relationship on screen, I knew viewers would ask: ‘is this legitimate?’, ‘is this faked?’ As viewers we’re judging the relationship in the same way as the immigration system. But it doesn’t matter if the relationship was legitimate, healthy or happy because having to go through the system takes something out of what that relationship is. It perverts it in some way.

Could you tell me a bit about your latest film, Scratch the belly I bare…, currently in development?

Scratch the belly I bare… is still about belonging, but the framework has shifted to thinking about how we value ourselves and how we seek value from other people. It’s set in the near future where dating show contestants wear prosthetic body sleeves protectant from unnamed atmospheric dangers. The film follows Aida, a contestant trying to establish a connection to the audience, in the vein of (social media) influencers: to people you have no actual physical relation to. They’re almost imaginary. In reality TV production, participation is conditional on surveillance; to be there is to be surveilled. So, Aida figures as she’s giving everything up already, why not share all her inner thoughts and feelings too? Aida does this through private monologues to broadcast viewers. As she grapples with her sense of value, her prosthetic sleeve reacts to the growing tensions. Celluloid feels vital to use and the plan is to shoot on 16mm because so much of the film is about skin. Scratch the belly I bare… will be the first film I’ve made entirely with photochemical film, and I’m hoping to manipulate it experimentally using Lomo tank development (hand-processing).

What does your development and production process look like? How do you make it work?

Scratch the belly I bare… has gone through different – and longer – processes than my other films, because of the pandemic. It was initially supported through the FLAMIN Fellowship 2019-2020, with 1:1 meetings with the producer Pinky Ghundale. I planned to workshop with actors to script the film, but in the end, I had to work by myself, so the way I’ve approached the script is more intensive. In terms of funding and production I’m lucky because I have a setting for the film. I was approached by Block 336, a gallery in Brixton, just before the pandemic. I was meant to have a show there in 2020, it’s now set for early 2023. So now it’s just working backwards from that. Because this film is situated in a narrative scripted world, I’m looking into film funding as well as art funding. But the way that you write about your projects is different when pitching to film funders versus art funders. It can be difficult to understand how to position your project. Because the ambition of this film is broader, I’m hoping to get funding that will better support the potential budget and the specialists that need to be involved.

Could you tell me about your links with the London-based filmmakers’ cooperative not/nowhere?

I graduated from my MA around the same time that Taylor Le Melle and Imran Perretta founded not/nowhere in 2018. We’re a black and POC-led artist workers’ cooperative and we’re invested in what that means. We inherited the resources of London Filmmakers Coop and Nowhere Lab. I didn’t have this kind of peer group at the RCA. I was the only black student for my year and the year above me, and I experienced a lot of racial discrimination. It was very difficult to work and study there. So, it felt like a gift to graduate into this community. We’re very much thinking about the core values of equity and community when engaging people. Particularly, we’re focused on black artists and artists of colour. We have a non-hierarchical pay structure, and we offer concession prices for workshops and activities because working with media can be quite exclusionary. With analogue filmmaking there is also potential for experimental ways of working and approaches to production that can be advantageous to people operating with less resources. These things have reshaped how we’ve worked as a cooperative and as a community over the last three years.

What does it mean for you to be named as one of Film London’s Lodestars of 2021?

I was pleasantly surprised to be selected as a Lodestar. It feels particularly nice being in the company of Jasmina (Cibic) and Imran (Perretta). I feel very fortunate to be recognised as an artist filmmaker and I hope it’s a way of making connections, getting people to see the work, and finding collaborators. With my new film going into pre-production, it feels important to reach out and find people in this moment.

More about this year’s Film London’s Lodestars, including a brief film about each of the selected filmmakers, creatives and craftspeople, here filmlondon.org.uk/film-london-lodestars-2021