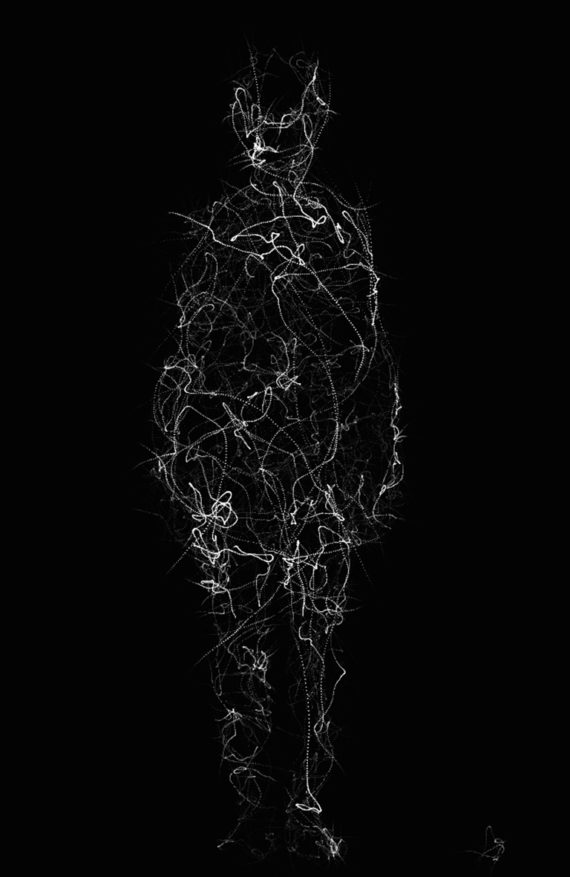 Artist Daksha Patel‘s wide ranging practice includes drawing, printmaking, animation and installation that engages with mapping and scientific visualisation technologies. Informed by research within scientific institutions, her recent residencies include Anatomy at King’s College London, Life Science at University of Dundee, and Neuroscience and Imaging Science at the University of Manchester.

Earlier this year Patel was a successful a-n Artist Bursaries 2020 applicant, receiving funding for eight one-to-one, bespoke training sessions with a creative technologist in creative coding for bio-sensors. Here she discusses how the award has enabled more meaningful collaborations with creative technologists, as well as the impact of coronavirus Covid-19 and subsequent lockdown on her practice.

How important has the bursary been to your practice?
The a-n bursary has helped support learning new skills through creative coding. It has paid for a series of professional development sessions with a creative coder called Chris Ball, who I had worked with before, but because I had relatively little knowledge of coding I didn’t fully understand his processes. The training has enabled me to collaborate much more meaningfully and it feels like we can finally speak the same language.

This has opened up a whole new way of working and given me confidence to be more playful with code. Although I’m relatively new to it, I’m surprised at how quickly it has become intuitive. I am comfortable thinking through this abstract language, which can look just like equations.

Coding is something I wouldn’t have even considered I could do before and the bursary has opened up possibilities for future work and collaborations. I don’t want to become a creative coder, but am interested in the interface between the digital world of coding and bio data and analogue practices of drawing. Understanding both sides has allowed me to really work intuitively and the a-n bursary has played a key part in this development. 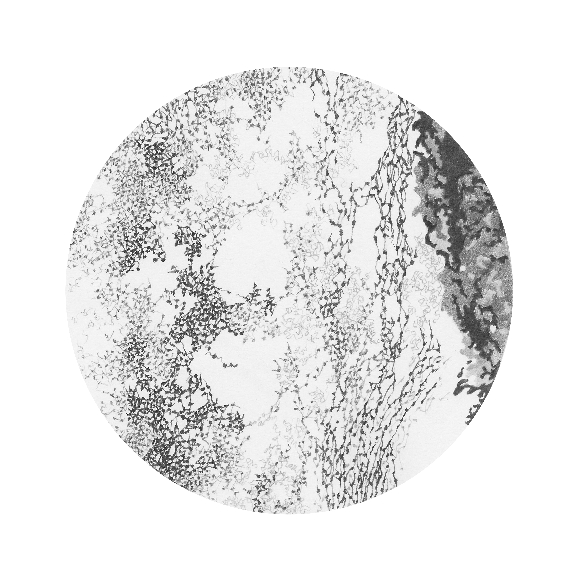 How has lockdown impacted the training sessions?
The lockdown, in many ways, was quite timely in terms of the training. We easily adjusted to having Skype sessions because we could share screens, so I would write a bit of code and Chris could instantly see it. We didn’t need to sit side by side, and just had regular meetings in the same way we would physically. I was able to practice in between, which was great because it was something I could concentrate on and make work whilst being unable to do many other things. 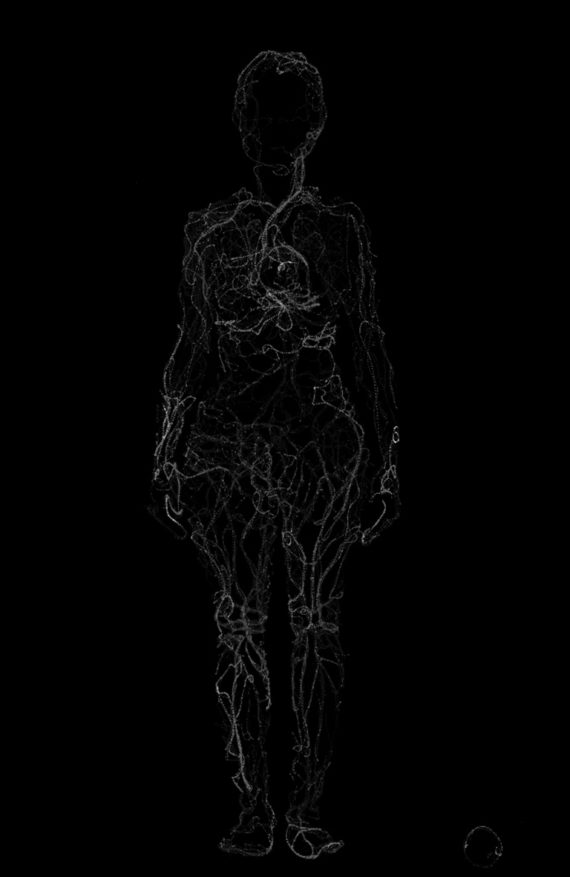 How has this impacted your practice?
The bursary has and will enable me to begin creating interactive work that projects body images. In a practical sense, we’ve reached the stage where we have scanned in a number of my analogue drawings, which then interact with bio data such as pulse sensors which track a person’s heartbeat. We write codes whereby that data interacts with the drawing and is projected in real time.

I’m interested in the relationship between bio data, scientific visualisations of the body and people’s ownership and agency of their own bio data. It’s rare for patients or participants in medical research to even see this, let alone having agency over it.

The larger and wider impact of the project is that women of colour and of a certain age are underrepresented in the coding and AI world, where it is predominantly white male. We tend to assume that technology and AI systems are neutral, but they can reflect the values and biases of people who write the code.

There are recent debates about visual recognition software, in that it is much better at recognising light face skin and males as opposed to darker skinned women. Other recent examples include Amazon trying to write software for scanning CVs to recognise potentially successful job applicants. When they started using it they realised it had a bias against women, so they tried to change it but eventually gave up because they couldn’t guarantee it wouldn’t be biased.

So it’s not the technology that’s the solution but actually having a more diverse workforce in the AI world, while having more diverse artists working with coding also has a wider impact.

Has the pandemic added an extra dimension to how people read your work?
I think there is something about representing the internal body at the moment that is very powerful. The original drawings are based on the circulatory system and imagining the internal body as a living moving system influenced by your own heartrate. At the moment there is this invisible danger out there in the environment which can somehow penetrate the body, even if we just touch a surface, which is a powerful dynamic to contend with.

Collaboration plays a crucial role in your work. How will this be affected post lockdown?
I feel like the parameters of collaboration will change slightly and we will have to adapt. It’s possible to set up processes without actually physically meeting, so I’m very much hoping it will still be possible.

But of course there has already been an impact. We had set aside two weeks in June at Kings College London where a small group of PHD students and doctor Anne Pollock, who is the academic I am working with, were going to test the work. We had planned a number of seminars to teach the students code and then get them to make the drawings.

It would have been a process of fine tuning from that experience. Obviously this is sadly now on hold with universities in general, not just Kings, while they try to work out the safest way to interact with students. 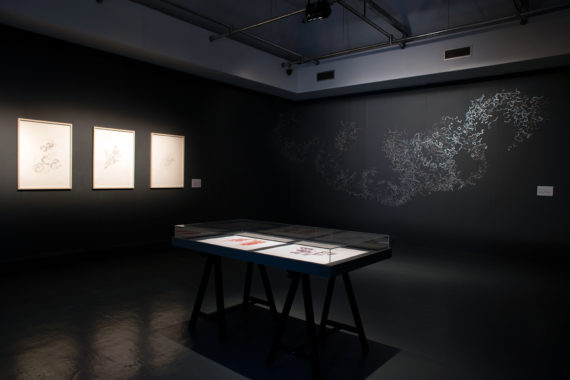 Is online exhibiting an option?
I’m in the middle of a year long residency in the anatomy department at Kings College, making work using the materials and objects I had found there in its Life Science Museum. This September we had planned to exhibit an installation there as it is such an amazing space, which is not normally open to the public. I don’t think it will go ahead.

I have suggested that instead I might do some kind of performance in the space, by myself with one other person filming it. I don’t want to just create a series of drawings for an online exhibition that is ultimately uninteresting, but a performance within the space would be something different.

I have never considered myself a performance artist, let alone wanted to be part of a performance. But the current situation has made many of us think in different ways and use our creativity to find solutions. We are in a very difficult period, but have to find a way to continue making and presenting work. 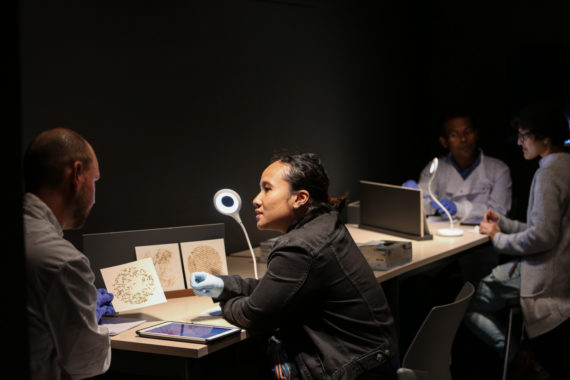 Do you think the arts are more important now than ever?
Recently I worked with patients in hospitals running a series of workshops. One group included dermatology patients, doctors and consultants here in Salford, and the other was with Parkinson’s patients in Dundee.

I was amazed by how using an arts activity as a space for enabling dialogue can be incredibly powerful. Right now this is something that would be beneficial to a lot of people, and I’m sure many would really welcome the opportunity to take part in something similar, even if it is done remotely.

There’s lots of existing research into the benefits of the arts to health and how therapeutic it can be. Perhaps now is the time to really value the role artists can play.