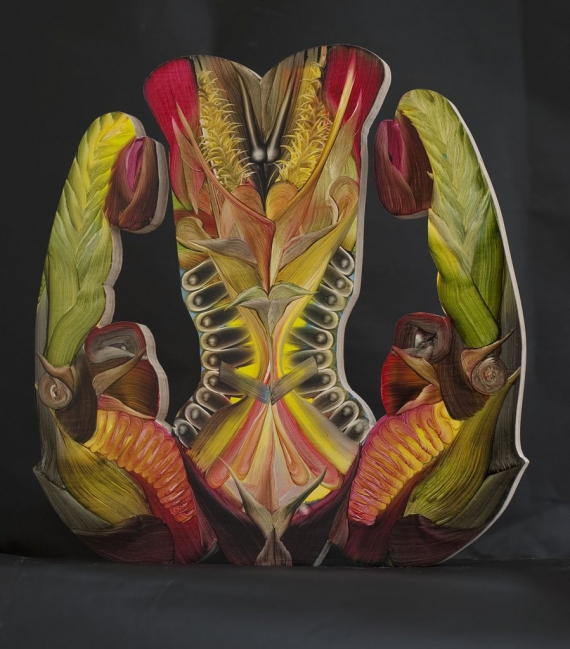 Part of the festival that’s ‘more than just a music festival’, Latitude Contemporary Art (LCA) Award and Exhibition includes a shortlist of five commissioned artists competing for a £10,000 prize and a chance to produce a new work for next year’s show.

LCA came about when Melvin Benn, Founder and Creator of Latitude, looked to expand an existing programme of visual art that had complemented previous festivals.

“I am passionate about contemporary art and it was always my intention to give it the same platform as music, theatre, literature and poetry, ensuring it was a key element of the programme at Latitude. Having previously exhibited spectacular works throughout the site and In The Woods, we launched the LCA in 2010. Working with the team involved in the LCA has allowed me to take art at Latitude to a new level and the standard of exhibits has been phenomenal. We have a wonderful shortlist of artists competing for this year’s prize.”

Exhibiting in the open air Iris Gallery, a dedicated woodland space within the festival site, the commissioned artists for 2012 include Tom Dale who has built a twelve metre transparent high-rise construction, Lisa Peachey whose subtle disruption of the site comes in the form of a wood and plaster piece entitled Cuckoo, and George Young who has made a monumental work that references two stolen sculptures by Barbara Hepworth and Henry Moore that have presumably been melted-down as scrap. Also included on the shortlist are Andy Holden and Linder Sterling, while last year’s winning artist Andy Harper will be exhibiting a new commission The Threefold Law. There is no set theme for the show, and artists have been selected on the merit of existing works – the only criteria is that artists have to be able to make work that can stand up to the challenges of the festival environment.

Lisa Peachey said: “Because my recent work is purposefully domestic in size, using materials that are often fragile, I was initially hesitant as to how I could make an outdoor piece that wouldn’t compromise my intentions. Following a site visit, I realised just what kind of scale was going to be necessary in order for my work to hold the viewer’s attention. This jump of scale was challenging in itself, but also the construction of the piece has meant I’ve had to rely on commercial contractors, which brought with it its own trials, with the projected delivery time of the components stretching on from a quoted four weeks to over two months. I became acutely aware of a certain vulnerability of an artist in these negotiations – in the building trade a late delivery might mean a hefty cost, but a late delivery of an artwork to an exhibition is tantamount to suicide. I hope that the finished work, Cuckoo, will suggest both the possibility of an image and its loss, and highlight the relationship of the purposefully ‘wild’ forest within the wider controlled landscaped environment of Henham Park.”

George Young added: “My work Treasure Trove copies two sculptures by Henry Moore and Barbara Hepworth, recently stolen for their metal, amalgamated into a new form using low cost, lightweight materials. This is my first work designed to be shown outdoors which has presented a lot of new problems, but many of my aesthetic decisions have been already worked out by Moore and Hepworth. My greatest challenge has been to make the works structurally sound. I wanted to make them look like they are falling or half suspended in time like they’re in some kind of limbo state since their disappearance. This turns out to be quite difficult to achieve, despite the polystyrene.”

The winning artist will be announced in the festival’s Lavish Lounge on 14 July by a judging panel that includes Melvin Benn, Martha Kearney (BBC) and Lizzie Carey-Thomas (Tate Britain).
http://www.latitudefestival.co.uk/lca/

Visiting next weekend’s Latitude festival? Why not post review of LCA on Reviews