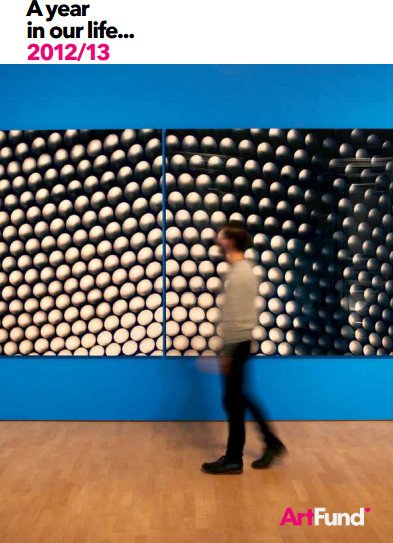 The Art Fund, the national UK fundraising charity that helps museums to buy and show art, has announced that its membership has topped the 100,000 mark.

The charity’s 2012/13 annual report also reveals that in the past year the Art Fund paid out over £6m to help museums and galleries buy works of art. It also assisted them by supporting tours and exhibitions in order to reach new audiences.

The annual report shows that it raised over £11m in the 2012/13 period, with membership income bringing in over £4.1m annually, an increase of 45% since 2007. The charity puts the majority of this increase down to the 2011 introduction of the National Art Pass, which gives free and discounted entry to hundreds of museums, galleries and historic houses.

Stephen Deuchar, Director of the Art Fund, said: “The UK public is among the most generous anywhere, consistently ranking among the top 5 or 10 countries for charitable giving. But we surely now lead the world in mass giving to the arts – no other country has an organisation like the Art Fund, with more than 100,000 museum visitors donating to help UK institutions build collections of outstanding art and other objects.

“We’re not just talking about major donors or those who can afford to see their name above a gallery – but mass giving by ordinary members of the public.”

In 2012 the Art Fund paid £6.3 million to 70 museums and galleries for the purchase of works of art, including Titian’s Diana and Callisto for the National Gallery and National Galleries of Scotland; Ai Weiwei’s Kui Hua Zi (Sunflower Seeds) for Tate; Rachel Whiteread’s Tree of Life, launched on the façade of the Whitechapel Gallery; Edouard Manet’s Portrait of Mademoiselle Claus, saved from export and bought by the Ashmolean Museum, Oxford; and Poussin’s Extreme Unction for the Fitzwilliam Museum, Cambridge.

In the last five years, the Art Fund has given over £26 million to help 187 museums buy works of art.