Art in Bearpit: an artist-led meeting point on a Bristol roundabout - a-n The Artists Information Company 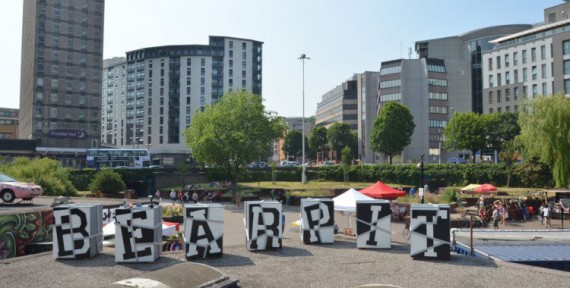 “It will become a visual landmark in the space but the intention is to also provide space and shelter for social and arts events.” Leela Clarke, co-director of Bristol’s artist-led producers Hand in Glove, is talking about a new commission by artist Philip Cheater.

The work will launch the Art in Bearpit series this May and remain in the public space of Bristol’s St James Barton roundabout – known locally as ‘the Bearpit’ – for the duration of this six-month pilot arts programme.

On the recommendation of Bristol-based public art producers Situations, Hand in Glove was invited by the Bearpit Improvement Group – a coalition of local residents, businesses and activists – to curate community-orientated art that will intervene within the walkways and public square of this once unloved area. Art in Bearpit: Curious Encounters in the City is the result.

Cheater, who creates bold structures that often reference the graphics and patterns within urban spaces, is developing a large-scale functional structure for the Bearpit – somewhere between installation, temporary pavilion and community hub.

Performance and participatory artists Vickie Fear and Megan Clark-Bagnall have also been commissioned to devise performances and events that intervene in the space. Each will present their work twice during the project, once towards the start and also at a later date.

Their performances will evolve in response to collaboration and dialogue with community groups and the on-site public, with Fear exploring the cross-over between performance and sculpture, while Clark-Bagnall will look at the idea of an everyday party.

“The whole feel of the programme is about intriguing and engaging – and presenting unusual encounters,” says Clarke. “There’s lots of people who pass through the space every day so we want to present stuff that will make people stop and linger and provide an interruption into the everyday.”

This sunken roundabout, a key pedestrian junction between Bristol city centre and the Stokes Croft area, has been slowly transforming over the past two years. Once a forbidding thoroughfare, it has become an enlivened community destination with a permanent cafe, fruit and veg shop and a range of pop-up markets, planting activities and other events.

“Everything that’s happening there is from the ground up, and the council’s really supporting it now as well,” says Clarke. “A lot of money’s gone into changing it cosmetically. It’s a mix of grassroots and also urban planning.”

As well as the three main commissions, Hand in Glove has an open call for South West based artists to explore new ideas for temporary public art works through a number of micro-commissions.

Clarke has a word of advice for potential applicants: “It’s a very particular kind of place, so if you don’t know the space it is worth going to visit before applying – it won’t suit every type of project.”

Situated in the St James Barton area of Bristol, known for its trade markets in medieval times, the Bearpit site is a consequence of post-war rebuilding combined with the urban planning strategies of the 1950s and ’60s.

As in many UK cities, this resulted in car use being given primacy over pedestrian activity, and the area gained one of the country’s many concrete islands. Its somber underground walkways rapidly gained the reputation of a neglected no-go zone.

“It’s had quite a bad reputation in the past as an unsafe area to spend any time in,” says Fear. “The Bearpit Improvement Group is really trying to change that and improve the area.”

Considering the Bearpit’s changing status within the city, Fear is particularly interested in drawing on the social dynamics and context of the site, and the manner in which it becomes a meeting point for very distinct parts of the city.

The Bearpit project itself is also a kind of meeting point – for grassroots-led and council-run regeneration, with Hand in Glove embodying the linking up of the artist-led with arts institutions in the city.

“Increasingly, it does seem as through Bristol organisations and artist-led initiatives are speaking to each other more and looking to build a culture that’s communicating with each other better,” says Fear, referring in particular to the joined-up working of last year’s edition of the annual Bristol Weekender.

“So to hear that Hand in Glove is working with support from Situations, as well as connecting back with community groups, I think is a really well thought-out way of working.”

As an artist-led producer, Hand in Glove has a track record of creating projects in unusual spaces around Bristol and beyond – Tenterplay, for example, involved taking artist-led groups on a camping trip.

Art in Bearpit signifies a new development within its practice, with the group’s role expanding further to encompass development and consultancy.

“It might be the case that perhaps the [Art in Bearpit] programme continues but in a different way, or maybe not produced by us but produced by other individuals or groups,” says Clarke. “We’re trying to set up a legacy for them to be able to produce art in the space.”

Art in Bearpit will launch in May 2015. artinbearpit.com

The deadline for the South West artists micro commissions is 22 February. See Jobs and Opps for details or visit the Hand in Glove website