Art in certain places: working with artists and the public in Preston - a-n The Artists Information Company 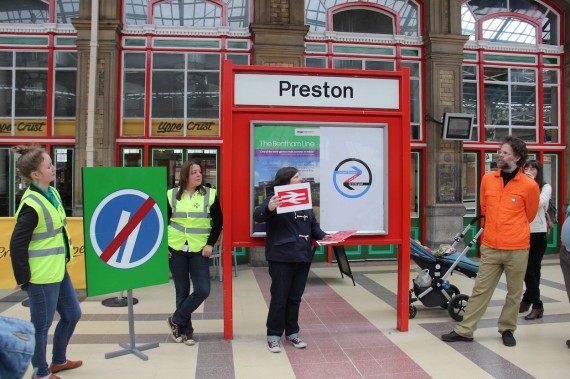 38 St Peters Street, Preston, is an unassuming terraced house, facing the library of the University of Central Lancashire (UCLan). It is also the head office of In Certain Places, the scheme led by UCLan’s Charles Quick and Elaine Speight, which since 2003 has worked in ingenious ways to bring art to the city.

This mission has manifested itself in varying forms, including Jeppe Hein’s interactive water-work, Appearing Rooms (2006), John Newling’s The Preston Market Mystery Project (2008), and Shezad Dawood’s science-fiction film, Piercing Brightness (2011). A book, Subplots to a City, charting the story of In Certain Places, was published earlier this year, and recent exhibition, Open House, welcomed the public inside number 38 to view work by four emerging artists. The exhibition also acted as the launch for the latest edition of the Hannah Directory, a free guidebook to alternative art and culture in the north.

Originally a partnership between UCLan and Preston City Council, In Certain Places began by responding to the city’s planned Tithebarn Regeration Scheme, which aimed to transform a third of the city centre into a modern retail and leisure complex. Tithebarn fell apart after the worldwide economic crash of 2008, but In Certain Places has kept its momentum going by opening up dialogues with artists and the wider public. As Speight says in her introduction to Subplots to a City: “Our projects are created with rather than for different people in Preston.”

Since 2003, 44 artists have made work with In Certain Places, around half of whom have been established names, and half local or emerging talent. Additionally, 63 speakers from a wide range of disciplines have taken part in symposia and events. Ironically, UCLan is now expanding, and it looks likely that under its masterplan number 38 will be demolished in a couple of years. Although this is no threat to In Certain Places, now seems like a good time to open up Open House and let the artists take over. So, I took the train to Preston and knocked on the door.

In what was once the house’s dining room, I watched Steph Fletcher’s film of a strangely-attired ‘worker’, played by the artist. “I found research about how if you install houseplants your workers will be more productive,” explains Fletcher. “So I made this strange worker uniform that’s covered in houseplants. I was thinking of freelancers and how often they don’t have support groups or networks or unions. They’re often quite isolated.”

Fletcher’s interest in the precariously employed led to the setting up of the Anxious Workers’ Club. One year’s free membership gives you a handmade badge of a houseplant that you ‘adopt’, plus further news and information by post – a refreshing change from endless emails. Naturally, I joined, having adopted the Black-Eyed Suzie.

“When I started it was just before the election,” Fletcher continues, “and for some reason the post got delayed and a lot of people ended up getting their badges the day after the election. So everyone was really depressed, but when they got the badges they said that gave them a chuckle. And sometimes that’s the best you can do; you’re not going to fix the world but we can try and look after each other.”

Pattern-based artist Bonnie Craig was resident in the house for a fortnight. “I’ve been thinking about the history of the house and the way it went from a domestic space to become more institutionalised,” she says. She’s putting the finishing touches to some tiny details; subtle white flower and leaf patterns she has added around the walls, which were previously painted cream. Craig also designed wallpaper featuring aspects of Preston’s industrial history for the front room of the house, presented alongside work by Claire Tindale whose photographs and models depict domestic and working places in miniature.

One model replicates a care home for the elderly, with armchairs typically arranged facing each other in straight lines, and a tea trolley with biscuits and teapot. “My grandmother went into a care home due to dementia,” says Tindale, “which is where the idea of the miniature came in, because of the shrinking of mental capacity, but also in terms of physical scope. I was involved in moving her into the care home so you had to rationalise her belongings from occupying a whole house to one room.”

Inside a nearby chest of drawers, a tiny living room was based on one occupied by a patient Tindale met, who had served on a minesweeper in World War Two. Floating up from the floor, I was surprised to see the ominous spherical shape of a maritime mine. Facing the chest of drawers, piles of envelopes and stationery were occupied by tiny items of office furniture, reflecting the way this former domestic room became academic space.

Upstairs at number 38, the walls were hung with posters designed by signwriter Cherry Tenneson, who has researched modernist transport information and its relation to Preston. Decorated with broad colourful abstract shapes, the posters bear deliberately confusing messages, including ‘Scheduled departure points are subject to diversions’ and ‘Outward journeys must not be in the past’, reflecting the artist’s interest in the way signage becomes redundant, for various reasons, not least the passage of time.

There’s an important local legacy here, because when Britain’s first motorway, the Preston bypass, later part of the M6, opened in 1958, it had its own typeface for road signs. It was followed a decade later by Preston’s enormous, brutalist bus station (listed Grade II in 2013 after a preservation campaign led by In Certain Places), which still contains futuristic examples of 1960s signage, originally very simple but made over-complicated by later additions.

Earlier, walking to Open House from Preston railway station, I had paused in the Flag Market to rest, briefly, on another of In Certain Places’ newest interventions, the Preston Bench. There are six of these elegant wooden objects, capable of seating up to ten people. Each has a large, single wheel on one end, enabling it to be moved. They were co-designed by Charlie MacKeith of Research Design and Quick, says the bench evolved from In Certain Places’ 2013 project, Harris Flights (pictured above), when a temporary wooden staircase was erected in front of the Harris Museum.

“After Harris Steps, the events department at Preston Council were going to buy a lot of plastic seats because they were really encouraged by the way the events were well attended. So I said, please don’t spend your budget on that, we’ll design a bench for you. We made a prototype and tested it out; they look as if you might be able to lift them quite easily, but it takes two people really.”

Made of hardwood supplied by Arauco, which runs sustainably-managed forests in South America, and built by the locally-based Smithy Joinery, the Preston Bench is people-friendly and durable. “We’ve seen people dancing on them and using them as tables for their food,” says Quick, showing me photographs to prove it. “The nice thing about benches is they’re sociable.”

Long may In Certain Places provide sociable art to the people of Preston.

Subplots to a City: Ten Years of In Certain Places is available from incertainplaces.org