Art Sheffield 13: a festival instigated by a work of art - a-n The Artists Information Company 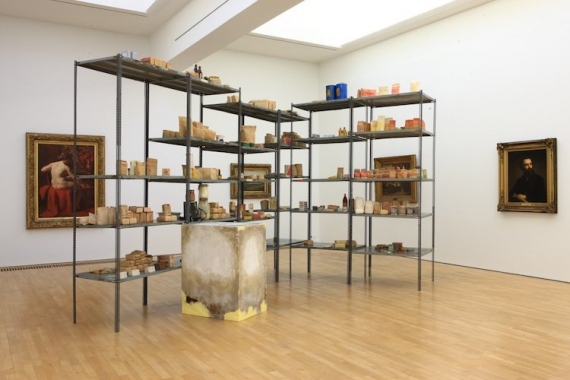 In Gallery III at Museums Sheffield’s Graves Gallery sits Joseph Beuys’ 1980 work Wirtschaftswerte (Economic Values). Juxtaposed with a group of paintings from Sheffield’s visual art collection, all painted during the lifetime of Karl Marx, Beuys’ work forms the centrepiece of Art Sheffield, a citywide festival of visual art that, for its fifth instalment, goes under the title of Zero Hours.

“The idea for Art Sheffield 13 was instigated by a work of art, not a curator, as has been the approach in previous years,” explains Kirstie Hamilton, Head of Exhibition Programming at Museums Sheffield. “In this period of adjustment we are living through, with government cuts and society asking challenging questions, it is appropriate to consider Wirtschaftswerte as the point of departure for Zero Hours ­– it was important to bring the work to Sheffield.”

Beuys stipulated that paintings from the host city’s visual art collection should be shown alongside Wirtschaftswerte, an industrial shelving system that displays packets of groceries bought in the former German Democratic Republic. “The paintings are displayed in their elaborate gilded frames,” explains Hamilton, “whilst the simplicity of the groceries leads us to question systems for understanding the concept of value.” Alongside Beuys, the gallery is also showing Zoe Beloff’s installation, The Days of the Commune, which references the Paris Commune of 1871.

Beloff will deliver a talk and Q&A session within the installation at Graves Gallery on 4 October, part of a series of events that will see Zero Hours address a global debate around time, work and labour. Exhibitions, performances and public commissions by international and Sheffield-based artists will tie together political and sociological themes, with contemporary artists’ production an ever-present element of the festival.

Art Sheffield 13 is a collaborative venture and one that is embedded within the city’s gallery and artists’ scene. Existing as a consortium including Museums Sheffield, Site Gallery, S1 Artspace, Bloc Projects, Sheffield Institute of Arts at Sheffield Hallam University and Yorkshire Artspace, the festival takes place across all these venues as well as The Crucible Theatre (where Forced Entertainment’s Tomorrow’s Parties will be performed) and several temporary spaces. Made possible by funding from Arts Council England with support from Sheffield City Council, Sheffield Hallam University, Sheffield Town Trust and the Henry Moore Foundation, the Art Sheffield advisory board consists of Tim Etchells, Sharon Kivland, Jaspar Joseph-Lester, Florian Kossak and Keith Wilson.

“The curatorial team is made up of people from all the exhibiting organisations who all suggested artists,” explains Charlotte Morgan, project manager at Bloc. “We selected for the exhibition as a whole, not just for our own venues, so the artists Bloc is showing are not necessarily the artists we put forward.”

At Site Gallery, Swiss artist Urs Fischer’s work, Money Bowl, invites visitors to leave behind coins collected on travels from different countries – a take on the ever-changing status of economy. “Fischer’s work is bleak yet playful and treats materials differently; he shows us money in a raw, new and re-valued form,” says Laura Sillars, Site’s Artistic Director. “Money Bowl is a live piece that lives in his friend’s [artist Simon Bill] hallway. When the artist goes away, he exchanges the money and the whole thing grows and develops.”

Other Art Sheffield highlights include a new site-specific sculpture by international artist Elena Bajo, paintings by Ryan Mosley, and sculpture by Katja Strunz, all at S1 Artspace. At Sheffield Institute of Arts, David Riff and Dmitry Gutov present The Need for Money, an exploration of miscommunications made in translation when talking socially about political subjects. In Furnace Park (a former foundry), artist in residence Ben Cain’s sculptural installation references a production line defined by the site’s extinguished status.

Summing up the collaborative approach of the 2013 festival, Charlotte Morgan of Bloc Projects says: “We’re not taking individual or organisational ownership of curatorial decisions. The whole process was collaborative – Zero Hours is an exhibition spread across each venue.”

Write a review of an event or show at Art Sheffield 13 on
a-n’s platform for critical writing, Interface.