Art spaces in Leigh: one door opens as another looks set to close - a-n The Artists Information Company 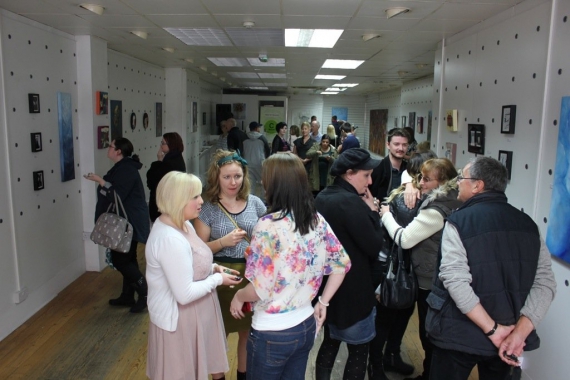 While the future of Leigh’s municipal art space, Turnpike Gallery, looks uncertain in the face of council budget cuts, artists in this small town in the Metropolitan Borough of Wigan at least have something to smile about, thanks to a project by Manchester’s Castlefield Gallery.

New Art Spaces Leigh showcases the work of ten local artists in a new pop-up project space that was previously a shop and the offices of a publishing company. “We know that there’s a serious lack of project spaces for early career artists, just to test things out, so this is a solution,” says Kwong Lee, Castlefield’s Director.

The gallery has collaborated with Cross Street Arts in nearby Standish to bring a damp, unloved former commercial premises to life with the hum of new creativity. “We don’t see this as an isolated project,” says Lee. “We want the space in Leigh to have a relationship with other New Art Spaces in Didsbury [South Manchester] and Widnes, creating possibilities for exchanges between artist groups.”

The launch exhibition showcases diverse work by artists who currently have studio space in the warren of former offices above the shop on Bradshawgate, the town’s main thoroughfare. Painter Gabrielle Anderson is a graduate of Salford University. As Castlefield Gallery’s ‘Leigh Envoy’, she has been instrumental in bringing a network of artists together to work in the building. She’s grateful to now have an affordable studio, in stark contrast to the situation of many other artists she knows.

“The network of artists I speak to can’t believe that something like this has sprung up here,” she says. “They are from all areas of Greater Manchester and can’t find anywhere to work. Even in areas outside Manchester city centre, it is still so expensive.”

Castlefield Gallery has supported offsite projects since 2006 and has created a coordinator post specifically to unite their New Art Spaces network, as well as connect with local organisations and groups. In this instance, Lee says that East Street Arts in Leeds was instrumental in helping them strike a deal to secure the space. Landlords, he explains, often need some convincing that there is a benefit in handing over vacant properties for a nominal rent.

“Previously, our negotiations with landlords were a bit hit and miss. You could have ten conversations with landlords or even the same landlord, use up all that energy, and maybe find one who was sympathetic. East Street Arts shared both knowledge and their specialist broker, who helped us to get a foot in the door with landlords. They can catch on to the subtleties and the language of dealing with property owners, where sometimes we can’t.”

As for Turnpike Gallery, which is situated above the town’s main library and just a short distance away from the new project space, Wigan Leisure and Culture Trust (WLCT) has said in a statement: ‘We are in extremely positive discussions with potential partners to explore options for the future, to ensure that exhibitions continue at the centre. The Turnpike Gallery is continuing to be run by WLCT while a new way of delivering exhibitions from the gallery is developed.’

It’s unclear exactly what this will mean for the gallery, which has been putting on exhibitions in Leigh since 1971. What is certain, though, is that the gallery’s one remaining staff member, Visual Arts Office Martyn Lucas, will be leaving his position at the end of the year having been made redundant. The need, then, for new art spaces in the town seems more pressing than ever.