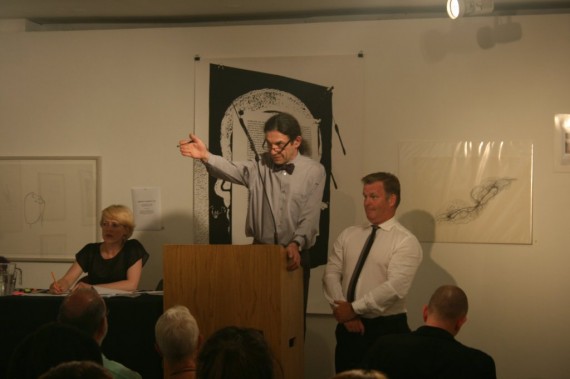 07.06.12 – As reported by a-n last week, Manchester-based Castlefield gallery has held an auction of sixty-eight donated works as part of its plans to develop new streams of earned income over the next twelve months and secure the organisation’s future as a leader of artist development in North West England.

The auction on Wednesday May 30 raised a total of £32,350, with Liam Spencer’s Deansgate and Whitworth Street at Twilight achieving the biggest single sale at £6,000. Of the sixty-two artists included, thirty-two are based or have deep connections with Manchester. Other artists with works going under the hammer included David Blandy, Andrew Bracey, Pavel Büchler, Rachel Goodyear, Sarah Hardacre, Hilary Jack, Mark Leckey, Haroon Mirza, Tim Noble and Sue Webster, Olivia Plender, Peter Saville, and Alison Turnbull.

Caslefield Director Kwong Lee said: “Team CG has rediscovered the entrepreneurial spirit that started Castlefield Gallery in 1984, when artists and art lovers got together to build a gallery to showcase emerging contemporary artists. The 2012 auction has demonstrated how the various generations of artists continue to value CG’s impact on the art scene inManchester. It has also given us great encouragement to see Manchester’s collectors out in force in support of CG and buying work by so many Manchester and UK artists.”

The gallery owns its city centre venue thanks to funding support from Arts Council England (ACE), although the revenue funding it previously received from ACE was cut during last year’s National Portfolio Organisations review.

Castlefield Gallery has been reshaping its business model in order to raise enough income from a diversity of sources to continue its work for the next generations of artists and audiences. Alongside the successful auction, it has secured project funding from ACE for the next two years, and research funding from Manchester Metropolitan University.