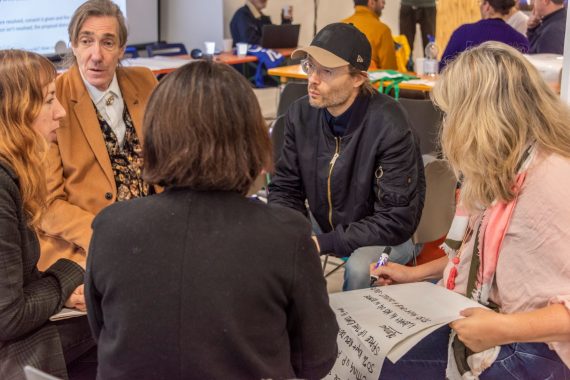 With a programme curated by TACO!’s Mat Jenner, Assembly Thamesmead explored how artists and artist-led projects continue to seek out new parts of the city both through choice and necessity. The event took place at Thamesmead’s iconic Lakeside Centre, which is currently undergoing renovation and is home to Bow Arts’ latest creative workspace development. 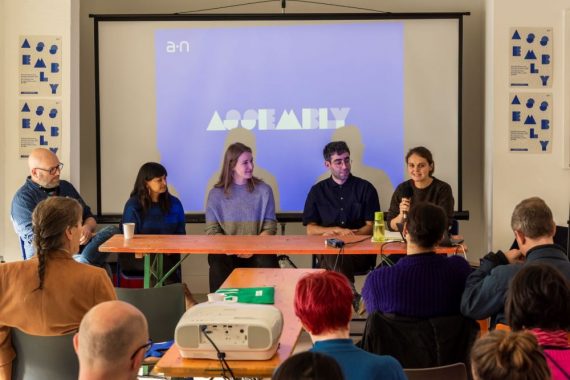 For the first panel discussion, Space is the Place, Phil Wilson-Perkin from Five Years, Sophie Blagden and Jhinuk Sarkar of Turf Projects and Philip Serfaty of Black Tower Projects were asked by chair Holly Willats to discuss the responsibilities of projects spaces within their local communities.

“Project spaces can be many different things… but they should always pay attention to their context,” said Serfaty, pointing out that Black Tower Projects’ neighbours are mostly other workspaces. “You should make your presence felt in a subtle and organic way,” he added.

Willats suggested that “architecture is a barrier to a lot of project spaces, particularly if you have to ring a door bell to get in.”

“But then you might meet the artist and have a more personal experience,” she added.

Turf Projects is housed in a shopping centre unit in Croydon. During a discussion about how becoming a charity can be an advantage for artist-led organisations when seeking funding, Blagden explained:

“We gave ourselves ‘important sounding’ job titles such as ‘head of community and accessibility’ as a bit of a joke but also to enable us to have conversations with funders and the local council.”

Blagden and Sarkar said there was sometimes pressure from the local council for organisations such as theirs to become bigger in order to access more funding. “Getting bigger shouldn’t be a measure of success,” they said. 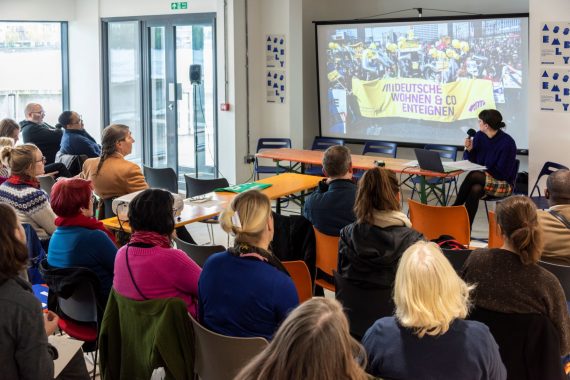 Next Laura Yuile discussed her ongoing podcast project Asset Arrest for which she poses as a potential buyer of a different luxury property each week and along with an invited guest explores topics such as urban regeneration, the neoliberal city, the housing crisis, globalisation, authenticity, exclusion and community.

With reference to the private redevelopment of former council housing block Balfron Tower, Yuile explained her view that “the public, community and social are being stolen from us and sold back at a high price”.

“Houses are no longer regarded as a dwelling but as an investment opportunity,” she said, citing examples of developments in London and Berlin that are marketed specifically to overseas investors.

Yuile’s exhibition, ‘Heavy View’, is currently showing at TACO!, 15 minutes walk away from the Lakeside Centre. During the lunch break, Assembly attendees were offered the opportunity to visit the show.

Others visited Thamesmead Texas’ current show upstairs at the Lakeside Centre. This collaboration between artist James Lander and architect Stephane Chadwick titled ‘An independent study, the future of artists and architecture?’ explores the built environment and residential community at Thamesmead, and asks what is to be done when the lived experience of residents falls short of successive architects’ plans and aspirations? 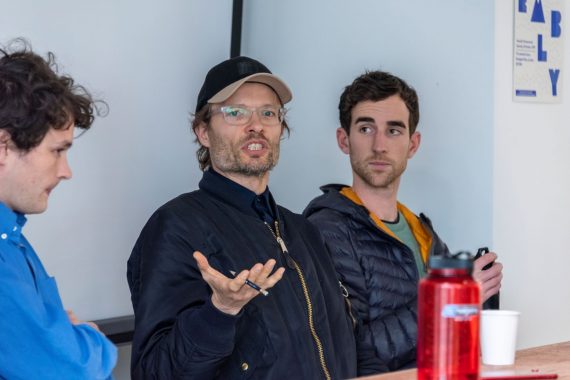 If we build it they will come, a panel discussion chaired by Jenner, included contributions from Chadwick and Lander as well as Joss Taylor, Project Manager at Bow Arts, and Diana Ibáñez López of Create London, an organisation whose projects support artists to connect with communities. The panel addressed how precarious living conditions have led many artists and arts organisations to address the housing needs of artists.

Jenner asked “why should artists be supported to find housing when so many other key workers are also in need of support?” The panel struggled to find concrete examples of the benefits artists bring to a community, although one panel member pointed out that “a community without creative people looks pretty dead.” 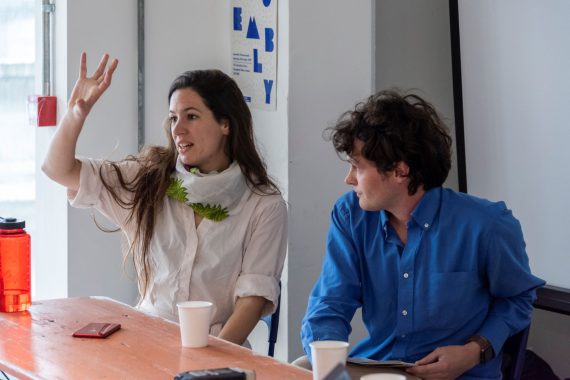 A discussion followed about what affordability means in terms of housing and whether lack of stability makes it difficult for artists to become a valued part of the community.

Referring to Thamesmead, one audience member pointed out: “There is a bit of hope here. Peabody, the developers here are trying to do it better. They host a cultural hub every month to bring together the local community and artists who live here, and have created a cultural fund – funded by all the filming work that goes on here at Thamesmead.”

“Stability is a luxury for artists,” added another audience member. “Community stability is an issue in London.” 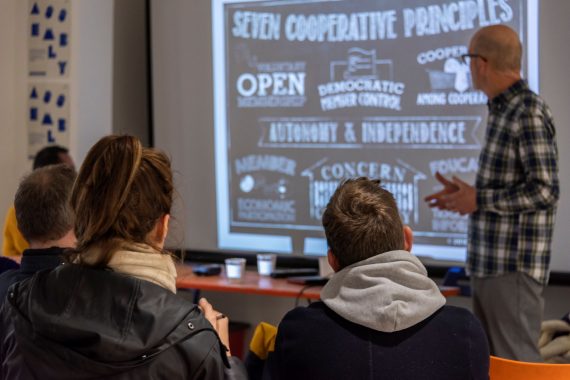 Cooperation, collaboration and connecting people was the theme of Don’t Mourn, Organise!, a workshop session led by Siôn Whellens and Alberto Duman.

Whellens, who specialises in advising community and worker coop start-ups introduced the principles of cooperatives. 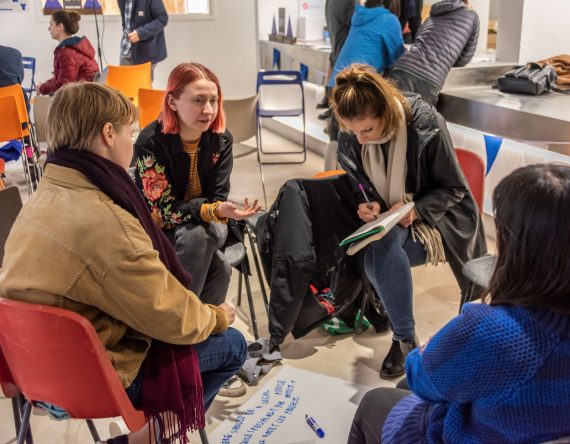 In the practical session that followed Whellens’ presentation, attendees split into small groups and one person from each group offered up a proposal. Members of the group then asked clarifying questions and raised any objections to the proposal. Proposals included ‘There should be a legal advice service specifically for artists and small artist-led projects’ and ‘There should be permanent housing for artists in need’. 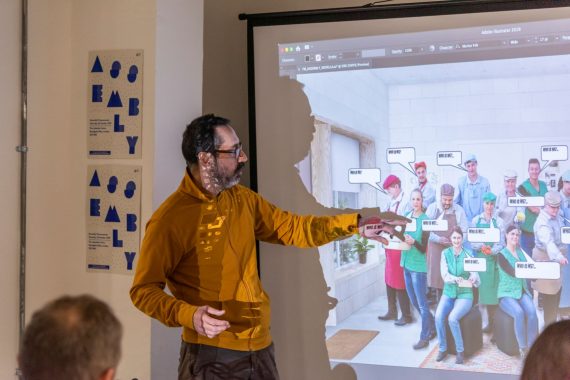 The day rounded off with a presentation by Duman who discussed his Talking Ghosts project that involves volunteers working collaboratively to give voice to the CGI characters that feature on the hoardings of housing developments around London. The volunteers work together to create speech balloons that are then added to the hoardings.

“As artists, we have to envisage the future ‘us’ and who will be inhabiting these spaces in the future,” he explained.

For his workshop session, Duman presented an ‘artist’s studio’ downloaded from a popular CGI trader site, and populated it with a group of workers known as the ‘workers bundle’. Working in groups, attendees were tasked with putting words into the mouths of these characters.

Responses included: ‘We don’t say, we act’ ‘We want security’ and ‘We want to be part of the community’.

The next a-n Assembly takes place in Stoke-on-Trent on 23 November 2019 and will focus on activism in the arts and the artist as activist, activator and change maker. Find out more and book your place www.a-n.co.uk/assembly/assembly-stoke-on-trent/ 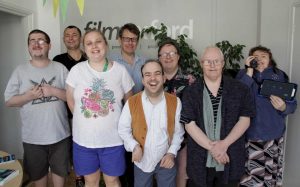 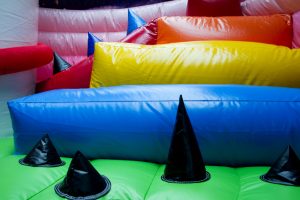