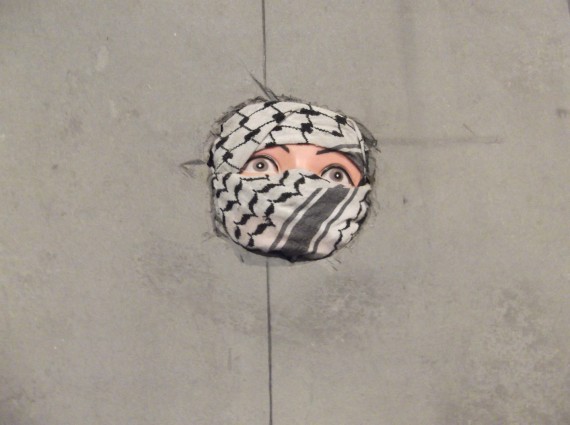 A policeman peers off the edge of the world – he doesn’t seem to have any idea what’s going on, either. A giant searchlight fails to shed any light on the chaos ensuing in his city, a place where horses live in high-rises, a hole glows through a hill and gallows grace the stage of The X Factor.

Created by Jimmy Cauty, this hand-crafted ‘model village’ is laid out on a large table. Footstools allow for panoramic vantage points, while through tiny windows the mystery thickens. Viewers are invited to launch an investigation – to make sense out of the disorder and disparate clues. Equally, it is possible to sweepingly survey the scene, smirk at its absurdity and move on, dismissing it is a curiosity, a fantastical fiction.

Cauty’s piece is one of the many works selected by Banksy for Dismaland, the street artist’s recently-opened ‘bemusement park’ at a disused lido in Weston-super-Mare. With Dismaland, Banksy has created the perfect media storm, the most talked about art event of the year.

The theme park provides pictures ripe for retweeting and a perfect backdrop for selfies; it was made to be regurgitated, the perfect social media event. Beyond the immediacy of this façade, however, lies a wealth of resources waiting to be discovered and digested, equipping willing visitors with the tools to criticise the society Dismaland supposedly imitates.

Behind the attention-grabbing, Disney-style central castle lies Guerrilla Island, in which a caravan-cum-library is packed full of left-wing literature ranging from Channel 4 Economics editor Paul Mason’s Postcapitalism to anarchist annuals. These books sit snuggly spine-to-spine with ‘chick-lit’ and ‘pop fiction’ novels; read whichever you like or just photograph the front cover.

The educative potential of this caravan far outweighs the scope of many contemporary art exhibitions with ‘radical’ pretentions, while remaining thoroughly participatory. When a break is needed from the sun, rain or the tinny tannoy playing Hawaiian slide guitar, it is a welcome oasis of what Banksy has dubbed ‘entry-level anarchism’.

Next to the caravan there’s a black bus, its destination: ‘Cruel’. Inside are things that were ‘made to hurt you’ – nothing here is fiction. There are examples of benches that deny the homeless a place to sleep; wearable Motorola technology designed to squeeze the most out of low-paid warehouse workers; drone-shaped sweets used as promotional material at industrial arms expos.

The mainstream media has rushed to present Banksy’s alternative theme park as a curiosity, a place of witty one-liners and easy laughs. This doesn’t begin to approach the complexity of the Dismaland experience.

The place is devoid of a singular artistic ego, offering instead a chorus of voices and expression. Other art forms are represented, including upcoming performances by Pussy Riot and the comedian Simon Munnery. It is a constellation of radical ideas and practical help; there’s even an employment lawyer on hand to talk you through any issues you may be having in the workplace.

Primarily, however, Dismaland is a remarkable physical experience that is aesthetically overwhelming and jarring. Its absurdity refuses to be synthesised into a tweet or a news report – it needs to be seen first-hand.

Dismaland is also genuinely distressing. Not because it is the ‘UK’s most disappointing tourist attraction’, but because of the books and pamphlets too readily left unread, the refugee-filled boats too happily played with. Banksy has shone a searchlight on contemporary society. It is up to us to investigate the chaos.