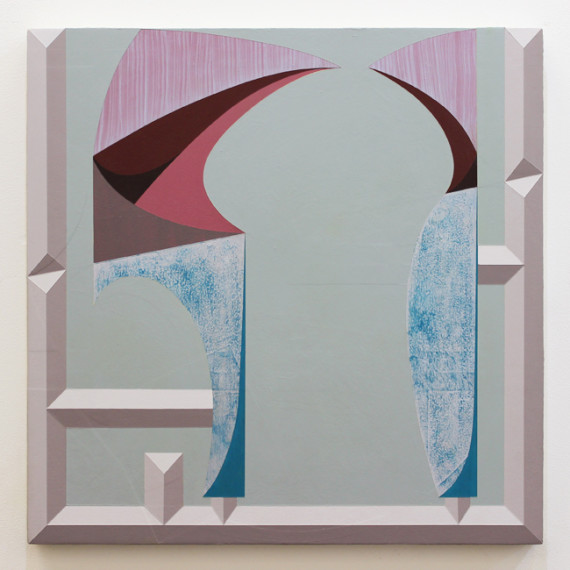 The artist Ben Cove died on 16 March after a short illness. Born in 1974, Ben grew up in Manchester and lived and worked in London.

Ben and I shared a friendship that I relied upon and cherished. We have both made work concerned with architecture, so we were in a few group exhibitions together before we met. We soon discovered there were many other shared interests and sensibilities, and for the last six years our friendship moved from Twitter (other users will know that he was incredibly funny in 140 characters) to real life. We had also begun collaborating in the last two years, most recently making ceramics together at Troy Town Art Pottery. I am so thankful for that time.

We only fell out once, over colour; something that Ben was incredibly skilled and sensitive in using (he was right in the end, of course). Ben often talked about having one colour that was jarring, that clashed with the rest of the palette and that might be a good rule for everything he did; he was against complacency. Regardless of the anxieties that I think all artists face, he was very sure about what he made and was never scared to trust his instincts; everything was deeply considered, complex and there were never any compromises.

Ben graduated from Goldsmiths College, University of London with an MFA in 2008 having previously completed undergraduate degrees in Fine Art at Sheffield Hallam University in 2001 and Architecture at The University of Nottingham in 1995. He exhibited widely and his solo exhibitions included Modern Language at Peter von Kant, London (2015); Vernacular Hangover at the Acme Project Space, London (2013); and New Plastic Universal at Castlefield Gallery, Manchester (2004).

In 2015, Ben was included in The London Open at The Whitechapel Gallery. He was the recipient of a number of awards including the Goldsmiths Warden’s MFA Purchase Award, several Arts Council Awards for Artists and an Acme Studio’s bursary as part of a four year live-work residency at the Fire Station in Bow, London.

Other tributes to Ben Cove

Julia Lancaster, senior residency and awards manager, Acme Studios, writes:
I first met Ben back in early 2005 when I was part of a panel that selected him for Acme’s Fire Station work/live residency program. I was struck by his tenacity, openness and wit, but most importantly by his work as an artist. His work at that time saw him returning to painting having grappled with conflicting influences of conceptual art and a continued interest in modernist architecture. We struck up a friendship that grew out of a mutual interest in art, artists, architecture, and books. Over the years this extended to a much more personal sharing of experiences and thoughts.

Throughout the last 11 years, Ben continued to be involved with Acme. His solo show, Vernacular Hangover, was a significant body of work through which he began to receive the attention he rightly deserved; as an important contemporary artist, living and working in the capital. His recent inclusion in the Whitechapel Gallery’s The London Open was testament to this and in recognition of his total commitment as a practicing artist. Importantly, however (and this was a measure of him) this commitment extended beyond the pursuit of his own ambitions, for he acted often in an advisory capacity, and as a mentor, his generosity and willingness to support other artists seemed boundless.

In 2015, he found himself on the other side of the table, taking part in the selection committee for a new cohort of artists for the Fire Station residencies. After some long hours of discussion, Ben proposed we “bring back all the artists for a fight – last person standing gets it!” He had a wicked sense of humour that immediately dissipated any air of the over-earnest or the self-important, and as someone who knew and understood exactly the challenges faced by many artists of continuing their practices and living in London, he remained extraordinarily positive.

Ben will be greatly missed by a great many people, myself amongst them, the only consolation being that I was fortunate enough to have known him at all and that my enormous respect for his work, his life and his optimistic outlook will remain as the lasting impression.

George Vasey, writer and curator, Northern Gallery for Contemporary Art:
I had the good fortune of working with Ben in different capacities and wrote on his work a number of times. I put Ben’s work in one of the first shows I ever curated in Hackney in 2008 – I found him very generous and engaged and we’d kept up a conversation ever since. My sadness at his untimely and entirely unexpected passing is deepened by the sense that Ben was only really getting started — his career was in its ascendancy and he had so much more to give.

Charley Peters, artist and writer:
Before I ever met Ben in person I knew of his paintings; precisely rendered spatial compositions that hover in between abstraction and resemblance. His works are intelligent and eloquent, making knowing references to art and design history, cultural context and a contemporary cut and paste aesthetic that seamlessly combines Memphis design kitsch, geometric form and suggestions of anthropomorphism.

Eventually, I was lucky enough to get to know Ben as a friend, showed with him and was able to discuss his work with him. These encounters always reinforced Ben’s dedication to painting and a compelling resolve to keep pushing himself into new formal and conceptual territories in his work – he was not content for his practice to sit still and never relinquished the exacting standards he set for himself.

I feel very fortunate that I had the opportunity to spend time with Ben in his studio, surrounded by his paintings and able to talk more about their making. I am grateful, like the many other artists who knew him, of the incredible appreciation and support he offered to my own work. Ben was in many ways the perfect artist: inquisitive, rigorous, generous and honest. I am so sad that there will be no new paintings and no more conversations and laughter with Ben in person, but feel extremely thankful for the wonderful memories and paintings that he has left us with.

Lucy Day and Eliza Gluckman, curators:
Our relationship with Ben, first as individuals working at Space Studios and more recently as Day+Gluckman, covered a period of around 12 years during which we were lucky enough to see his practice shift, develop and evolve. We worked with him three times – the group exhibitions Cantilever (2008) and Speaking Space (2011), and a commission in 2009. Ben was a familiar and hugely supportive visitor to our shows and those of his contemporaries. Beyond the conversations and the chats about life was his utter commitment to his practice.

Listening again to the recent radio interview that Ben did with Resonance FM I am reminded of the vast range of knowledge and references that he included in his work and how carefully he considered his use of them. Ben loved his music and this rhythm flowed through his work. I’m reminded in particular of the glorious, vibrant energy of Big Bopper that shone in Cantilever, through to Revisitor, with its articulate fusing of modernist, Memphis and the personal that held the entrance wall of Speaking Space.

Everything was meticulously thought through, whilst constantly allowing the viewer to question and engage with it. Although imbued with theories of abstraction and modernism, like Ben his works were also witty, intelligent and filled with his huge personality. He is already hugely missed.

David Ben White, artist:
The loss of Ben Cove has cruelly robbed so many of a dearly loved, smart, funny and caring friend and the art world of an artist who had found their own articulate and powerful voice. This was brought home to me while listening to his interview on Resonance FM with Morgan Quaintance, which stands as a moving reflection of the fantastic place Ben was in as an artist and thinker.

Hearing it reminded me of one studio visit where I criticised Ben for setting his computer to endless slide projection, juxtaposing images of classic modernist architecture, design and paintings. My warning was that he would never be able to finish a painting, as the stream of images would be proffering endless alternative possibilities. Listening to Ben’s interview made me realise how wrong I’d been and how important this process of inundation was to his conceptual development.

In the new paintings, shown in the London Open 2015 at the Whitechapel Gallery and in the show Modern Language at Peter von Kant, much of this language was clearly in play. Hung against photographic images of museum viewers pondering African tribal figures, the paintings forged a language of extreme potency. Displaying a distinctly rococo sensibility, the paintings swung brazenly between quoting elements of interior décor, architecture and the clunky lo-fi aesthetic of computer games, incurring an unsettling quality of hybridity.

This inundation of recognisable tropes, which lent the works their fundamental push and pull, continually repelling and seducing, left it unclear which side of the taste barrier their creator was on. It seemed to me that Ben was articulating a postmodern discourse that felt excitingly present tense. I bitterly miss the loss of Ben my friend, but I also feel fundamentally angry that we have all lost a fantastically interesting and pertinent future lifetime’s work.

Marion Michell, artist:
How does one write about a friend’s death? I’ll talk about his exquisite and always exciting art, which reflected so much of his character – fiercely intelligent, generous, open, reflective, inquisitive, witty, daring…

Art for him was about exploration and investigation. He could have rested on his laurels on multiple occasions, trodden safe and possibly better remunerated paths, but he loved experimenting, turning new corners, and worked across media with admirable skill. His work pushed boundaries (playfully it seemed), always surprised, and I thought of him as the most original and natural artist I had the pleasure to meet. He was exacting, knowledgeable too, and spoke about his art and that of others with great lucidity and insight.

He last visited me in January. We talked about our plans. I don’t think I know yet how much I will miss him.