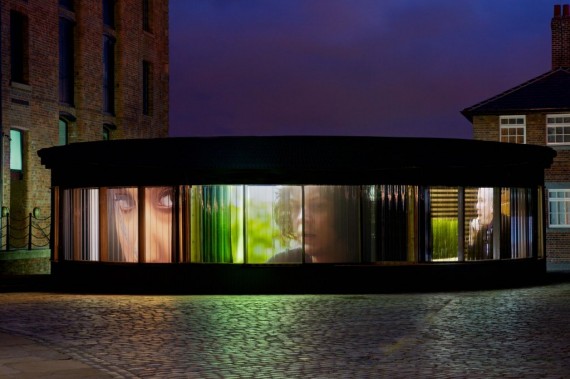 There’s a door with VIP on it and you’re not coming in; an old bakery in Anfield now staffed by artists and serving cakes; a vast former Royal Mail sorting depot teeming with art from around the world. The UK’s biggest and most established contemporary art biennial is back for its seventh edition, filling the city’s art institutions and, in a more modest way than previous years, infiltrating places where contemporary art doesn’t usually go.

The festival’s theme this year is hospitality and the idea of The Unexpected Guest, and Friday’s opening night performance by Rhys Chatham saw the American minimalist composer and a hundred electric guitarists warmly welcomed by a packed Anglican Cathedral. It was standing room only inside and queues snaked from the Cathedral’s door and up Duke Street. A very Liverpool moment that chimed – or rather droned discordantly – with the festival theme.

“I think people in Liverpool have got used to art over the seven editions of the Biennial and are very hospitable to it,” said Sally Tallant, who took over as the Biennial’s director nine months ago. “It’s really unusual that not only the people of Liverpool but also the council are very supportive of what we do.”

While politically and financially such support has played a key role in the Biennial’s development, the festival continues to tread the line between celebrating and critiquing the city; embracing and working with its institutions while at the same time enabling artists to challenge and criticise them.

So, that shiny metal VIP door – But I’m On The Guest List Too! by Scandinavian duo Elmgreen and Dragset – has a point to make. It’s in Liverpool One, a landmark city-centre regeneration zone built around shopping and leisure. You’ll find it just outside the new Hilton Hotel and, on my visit at least, there was a broad shouldered doorman manning it.

He looked convincing with his cropped hair, white shirt and black tie (“I work at John Lewis’s normally,” he said. “No, not in security.”) The door is tantalisingly ajar but permanently fixed in place, the gap impossible to squeeze through. While the art is for everyone, luxury international hotel chains and high-end consumerism are clearly not.

The bakery in Anfield, over the road from the home of Liverpool FC, digs deeper into a side of Liverpool that high profile, city centre regeneration appears to turn its back on. With 2Up 2Down/Homebaked, Jeanne van Heeswijk draws on the idea of the artist as activist and instigator. The project is a response to the now abandoned Housing Market Renewal Initiative (HMRI), which has pushed long-term residents out of their homes, beginning a demolishing and building scheme that has now stalled.

The result is a community in limbo, old houses boarded up, new ones still to be built: “The most political thing to do as a citizen in a democracy is to show that there’s an alternative,” said van Heeswijk over coffee and cakes (the latter were made off-site; the baking equipment is still to be purchased).

A visit to the bakery forms part of The Anfield Home Tour, hosted by Carl Ainsworth, Independent Tour Guide (motto: I know where I’m going). Funny, entertaining and poignant, the tour (Saturdays, 11.30am, bus departs The Cunard Building) tells the story of the area, and most importantly, the HMRI debacle.

Carl is actually a character played by an actor, but there’s plenty of indisputable fact in his fiction, including the recorded voice of Liverpool artist Jayne Lawless, who grew up in Anfield. The tour stops outside her now boarded up family home; her anger and sadness at what has happened heaps tragedy on top of Carl’s Scouse comedy.

The journey from the imposingly beautiful and seemingly immovable Anglican Cathedral to a derelict terrace house in Anfield seems to encapsulate the Biennial’s relationship with the city. As Tallant said: “You can’t escape the buildings and architecture in a place like Liverpool.” Football stadia aside, there are no buildings more associated with Liverpool than The Three Graces on the city’s Pier Head. The ground floor of one of these, The Cunard Building, has been taken over to host part of The Unexpected Guest, curated by the Biennial’s Lorenso Fusi.

That such an iconic building can find space for a temporary exhibition – it has plenty of empty office suites to let – tells us a lot about how Liverpool has been buffeted by the financial crisis of the last four years. Hanging from the ceiling is more proof – scores of To Let signs, recreated by artists’ group Superflex from real ones spotted around the city.

The LJMU Copperas Hill Building is a less grand but similarly imposing space for art. The former Post Office sorting depot hosts Bloomberg New Contemporaries in its vast ground floor loading bay. It’s a huge space to set the work of new artists adrift in and the strong selection of video pieces fare best. Upstairs is City States; shows by 13 cities, from Hong Kong to Birmingham, UK. Courtesy of Eastside Projects, Birmingham The Magic City offers an entertaining take on the UK’s second city, soundtracked by triggered snippets of Napalm Death and, in David Rowan’s film, the hum of Spaghetti Junction traffic.

Some of the most engaging moments in this year’s Biennial are delivered through film. There’s Anja Kirschner and David Panos at FACT; Ming Wong’s Making Chinatown at 28-32 Wood Street; and, most compellingly, John Akomfrah’s The Unfinished Conversation at The Bluecoat, a three-screen installation exploring race and identity, told in part through archive footage of academic Stuart Hall’s life.

Outside Tate Liverpool, American artist Doug Aitken’s The Source is housed in its own David Adjaye-designed pavilion, all paid for from a £200,000 Sky Arts pot. Aitken has interviewed 18 people whose creativity he admires, from musician Jack White to architect Paolo Soleri. While a thoroughly engaging piece, it’s essentially a case of ‘celebrity artist interviews creative celebrities about being creative’. Only an artworld name like Aitken could squeeze through the VIP gap with an idea like that.