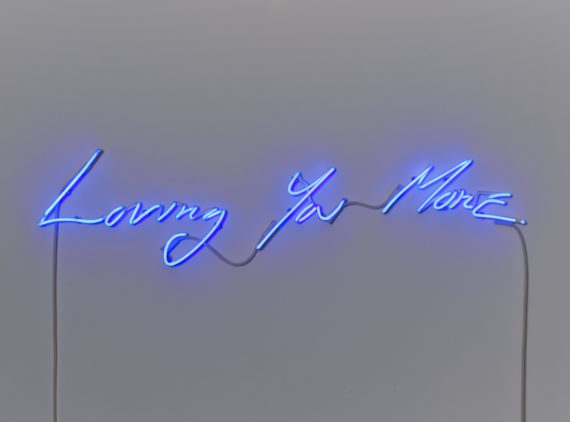 Sotheby’s auction to help survivors of Grenfell Tower fire raises over £1.9 million Tracey Emin’s neon work Loving You More raised £135,000, while the artist’s proof of an edition of Wolfgang Tillmans’ deep green abstract Freischwimmer 193 raised £320,000. Other works in the 31-lot sale included Tacita Dean’s Lay the Dust with Tears, a charcoal on paper work which was created especially for the sale.

Omer Fast responds to protests at James Cohan gallery show Fast’s exhibition in New York, which has been accused of racism by protestors, features an installation that attempts to return the Lower East Side space to its pre-gentrified state and includes objects associated with Chinatown. In a statement the artist said: “I’m not surprised there have been critical reactions. I completely understand people’s need to push back. We all have unseemly baggage, racist and otherwise, that needs to be sorted through. We all overstep bounds and must shine a light on our darker hypocrisies, myself included.”

Lara Favaretto sculpture in Skulptur Projekte Münster raises €26,600 for people facing deportation The work featured a small slit through which people could deposit donations to Hilfe für Menschen in Abschiebehaft Büren e.V., an association that assists those facing deportation.

National Portrait Gallery launches major competition for £35.5m expansion The winner of the contract will deliver a major overhaul of the Grade I-listed Trafalgar Square building, which will see its East Wing reopened to the public by 2023. The ‘Inspiring People: Transforming our National Portrait Gallery’ project represents the largest upgrade in the Ewan Christian-designed 1896 building’s history and comes 17 years after Dixon Jones’ Ondaatje Wing opened, increasing exhibition spaces by 50%.

Mystery over Christ’s orb in $100m Leonardo da Vinci painting The crystal sphere in Salvator Mundi artwork lacks optical exactitude, prompting experts to speculate over motive and authenticity. Declared authentic just six years ago, it is to be sold on 15 November by Christie’s New York, which describes it as “one of fewer than 20 known paintings by Leonardo, and the only one in private hands”.

Explicit sculpture finds new home at Pompidou Centre Dutch artist Joep Van Lieshout said he was very happy with the Pompidou’s offer to display his sculpture, which is about domestication. It had previously been rejected by the Louvre Museum because it was deemed too obscene.

Tim Storrier wins Doug Moran prize for portrait of artist McLean Edwards The Lunar Savant wins the $150,000 national portrait prize in Australia’s richest portrait prize, whilst Dagmar Cyrulla’s self-portrait was highly commended. Storrier was one of 30 finalists in the annual award, which was announced on Wednesday.

Spanish court orders woman who claimed to be Salvador Dalí’s daughter to pay for exhumation A judge in Madrid had ruled that Dalí’s remains needed to be exhumed after Pilar Abel, a tarot card reader who alleged that the artist had an affair with her mother Antonia Martínez de Haro in Port Lligat, Spain, filed a lawsuit against the Spanish state and the Gala-Salvador Dalí Foundation.

Beatrix Ruf resigns as director of the Stedelijk Museum over alleged conflict of interest Ruf’s departure comes after allegations in the Dutch press that her art advisory business conflicted with her role at the museum. In 2015, the first full year of Ruf’s employment at the Dutch institution, the profit of her private art consultancy business was reported as €437,306.

Moira Lindsay appointed Head of Collection at the British Council Lindsay joins from University of Liverpool Victoria Gallery and Museum, where she was curator for 11 years. She was previously at the Walker Art Gallery Liverpool.