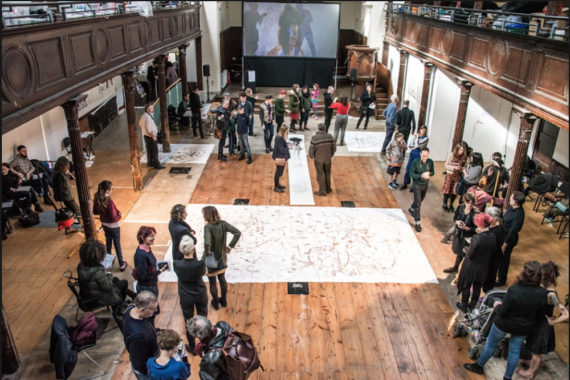 Fabrica to launch crowdfunding appeal to plug funding gap The Brighton-based gallery has announced the launch of crowdfunding campaign after local funding cuts have left it needing to make up £22,000.

The gallery’s director, Liz Whitehead, said: “If we don’t close this gap by the end of March, we will be forced to make further cuts. We may even have to shut our doors. As Brighton & Hove’s foremost centre for contemporary visual art, this would be a massive loss.”

Fabrica has played a key role in the area’s artistic and wider community since it launched 22 years ago. Whitehead explained: “Many people  including some of the city’s most vulnerable –  rely on us. We don’t want to cut any of our vital work.”

Conservative councillor John Abbott had previously said any kind of graffiti on walls should be removed, claiming Banksy’s work was not ‘real art’ like that found in the city’s Ferens Art Gallery.

The work, which was unveiled on Scott Street, Wincolmlee, last week, features a child carrying a wooden sword with a pencil attached to the end, under the text ‘draw the raised bridge!’

Arts minister Michael Ellis places export ban on Turner painting The move comes after the work came up for auction last April, selling for £18m to an overseas buyer. It is hoped that the ban will allow time for a UK buyer to meet the asking price. The painting, titled Ehrenbreitstein, was first shown at the Royal Academy of Arts in 1835. It depicts a ruined fortress on a cliff overlooking the Rhine near Koblenz, Germany.

Schools tell BBC that creative subjects are ‘being squeezed’ A new survey shows that secondary schools in England are cutting back on creative arts subjects. Nine in every 10 respondents said they had cut back on lesson time, staff or facilities in at least one arts subject – including music, art and drama, plus design and technology.

In response to the findings, John Kampfner, of the Creative Industries Federation, told the BBC: “Arts provision should be seen as a core subject. There’s nothing soft about subjects that create the talent that creates the fastest growing sector of our economy.”

National Gallery of Art in Washington postpones Chuck Close and Thomas Roma exhibitions The move follows accusations of sexual misconduct against both artists. According to the Washington Post, the Close exhibition was due to open on 13 May 2018 while the Roma show was scheduled for September.

However, the shows have not been cancelled. The gallery’s chief of communications Anabeth Guthrie told Hyperallergic that they have merely been “postponed indefinitely”.

She said: “Given the recent attention on their personal lives, we discussed postponement of the installations with each artist. All parties involved acknowledged that it is not the appropriate time to present these installations.”

Art Newspaper exposé helps close Russian avant-garde art display in Ghent museum All 24 Russian avant-garde works loaned by the Dieleghem Foundation to the Museum voor Schone Kunsten in Ghent have been removed and placed in storage. It follows questions regarding the works’ authenticity by ten dealers, curators and art historians in an open letter published on 15 January.

In it, they claimed that the works “have no exhibition history, have never been reproduced in serious scholarly publications and have no traceable sales records.” This resulted in Flemish Culture Minister Sven Gatz announcing the creation of an ‘expert committee’ to examine six of the works. The rest, he said, would remain on show until the committee’s findings were released at the end of February.

However, the museum has now issued a statement – at 5.10pm on 29 January, just four hours after Gatz was forwarded a copy of The Art Newspaper’s 3,000-word exposé – acknowledging that the committee would now be granted “unlimited access to all works… so that research can be conducted smoothly and in complete serenity”.

Photographer Julia Reyes Taubman dies The founder of the Museum of Contemporary Art Detroit passed away on 28 January at her home in Bloomfield Hills, Michigan. She was 50 years old. Taubman had also served on the board of governors of the Cranbrook Academy of Art and was a former board member of the Rock & Roll Hall of Fame in Cleveland.

Basquiat: Boom for Real is most popular show in Barbican’s history Final figures for the exhibition, the first UK survey exhibition of Jean-Michel Basquiat’s work, are expected to reach more than 215,000 according Jane Alison, the Barbican’s head of visual arts. Over its final weekend more than 7,000 people visited the show, which ran from 21 September 2017 to 28 January 2018.